Cooper Hewitt Chief Was Forced Out After Probe of Her Wedding 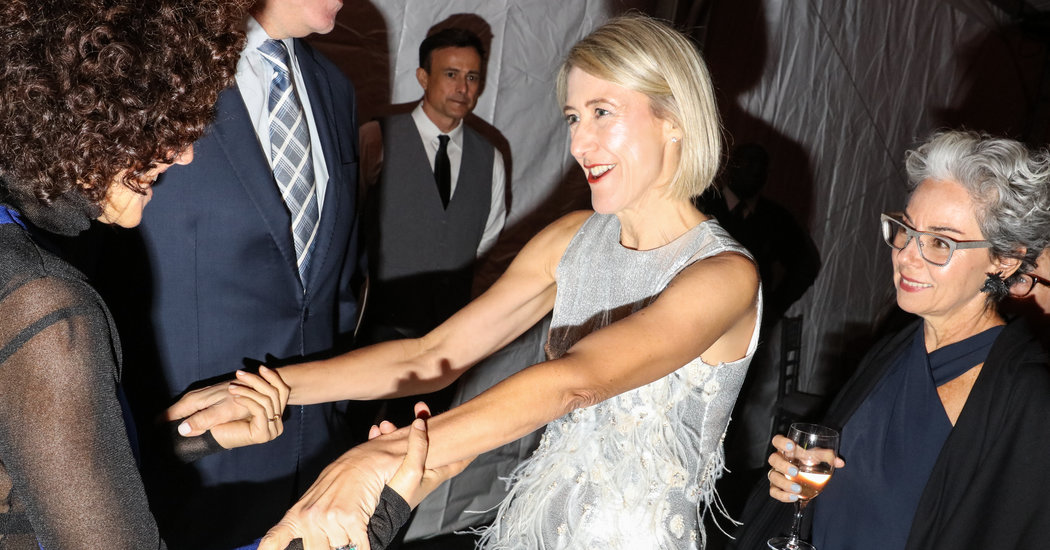 Everything fell into place for Caroline Baumann on her wedding day. She wore an elegant silveresque dress she’d ordered from a Brooklyn designer. She exchanged her vows at a lush Hamptons preserve inside one of her favorite sculptures, a dome designed by R. Buckminster Fuller. She put photos of the day on Instagram.

That joyous event may have cost Ms. Baumann her job.

Ms. Baumann was forced to resign as director of the Cooper Hewitt, Smithsonian Design Museum in Manhattan last week following an investigation by the Smithsonian’s inspector general into potential problems regarding the procurement of the dress and the wedding space.

Her resignation was made public on Feb. 7, without explanation of the reason. Two people with knowledge of the Smithsonian’s decision making, but who declined to be identified because the organization was not publicly commenting on the matter, said that the investigation had turned up evidence of an appearance of a conflict of interest.

The ousting of Ms. Baumann has angered members of the Cooper Hewitt board, which is separate from the Smithsonian leadership. Several board members said they were considering resigning because they disagreed with the decision and were not consulted in advance. A number of the board members have donated substantial sums to the museum in recent years, and their departure could affect its finances.

“I know the circumstances of the investigation that led to Caroline’s dismissal and I must say I am appalled that this was its conclusion,” Judy Francis Zankel, a prominent philanthropist who serves as the secretary of the board, wrote in an email to Lonnie G. Bunch III, the Smithsonian’s secretary and top official. “I have been working with her long enough to know without a doubt that she has been unfairly accused and unjustly judged.”

Even board members who acknowledged Ms. Baumann may have violated policy said they believed the punishment was too harsh.

It was unclear whether there were additional reasons for Ms. Baumann’s forced resignation, and a Smithsonian spokeswoman, Linda St. Thomas, declined to discuss specifics. “We’re transparent about a lot of things,” she said, “but not personnel.”

Ms. Baumann, 53, declined to be interviewed. She had been with the museum since 2001, having previously worked at the Museum of Modern Art, and was named director in 2013.

Despite its turn-of-the-century housing, an imposing Fifth Avenue mansion built for Andrew Carnegie, the museum is renowned as a repository of forward-thinking design in an array of fields, including art, architecture, graphics, electronics and products.

Several trustees said Ms. Baumann had been transformational for the Cooper Hewitt, overseeing its $91 million renovation, raising the museum’s profile and attracting donations.

The investigation into her conduct was triggered by an unidentified staff member’s complaint, and focused on her September 2018 wedding to John Stewart Malcolmson, a branding and graphic design consultant. (The wedding was featured in the regular “Mini-Vows” section of The New York Times.)

One issue was the dress Ms. Baumann commissioned from a young Brooklyn designer, Samantha Sleeper. Ms. Sleeper said in an interview with The New York Times that she provided the inspector general with emails showing that she had charged — and Ms. Baumann had paid — $750 for a cocktail dress. But since the designer’s website says that “custom gowns begin at $3,000,” that price discrepancy raised eyebrows at the inspector general’s office, which sent agents to speak with Ms. Sleeper.

According to Ms. Sleeper, the agents suggested that Ms. Baumann had offered to use her stature as the head of Cooper Hewitt to wrangle a discount, perhaps by offering to promote Ms. Sleeper’s work. Ms. Sleeper said she responded that she had given Ms. Baumann an appropriate price, since the dress was a sleeveless sheath and not a wedding gown. She said that she told the agents that she was not seeking publicity, as she had already been featured in major magazines.

“It was a super simple silhouette with no freelancers working on it besides me,” Ms. Sleeper told the The Times. “I did not give her a discount nor did she ask for a discount. She asked the price of the dress, I sent her an email and she paid me that amount.”

It is not clear what the inspector general concluded about the dress, but another focus of its investigation was the location of the wedding, the LongHouse Reserve in East Hampton. The reserve, a 16-acre property with carefully tended gardens and outdoor sculptures, is run by a nonprofit founded by Jack Lenor Larsen, a prominent textile designer who lives on the property and is a friend of Ms. Baumann. (In 2015, the Cooper Hewitt awarded Mr. Larsen one of its annual national design awards.)

Mr. Larsen welcomed Ms. Baumann’s use of the property for the ceremony (the reception was held on Shelter Island) and did not charge her. According to the people familiar with the Smithsonian’s decision, it took issue with the fact that Ms. Baumann allowed Mr. Larsen’s nonprofit to hold its board meetings at no cost in a conference room at the Cooper Hewitt.

“How can it be inappropriate for a nonprofit to use a conference room for a board meeting?” said Matko Tomicic, the executive director of LongHouse. But the Smithsonian was apparently concerned about the appearance that favors had been exchanged and believed that Ms. Baumann should have reported the free use of the reserve as a gift.

The Smithsonian is not a federal agency, but it was created by Congress and is partly funded by the government. In accordance with its charter, its board of regents comprises three members each from the House and Senate, the vice president, the chief justice and members of the public.

In many ways, it behaves like an appendage of the government, and has a conflict of interest policy that mimics those of many public agencies: “Employees must not engage in private or personal activities that might conflict, or appear to conflict, with Smithsonian interests, such as using Smithsonian employment for private gain” or “giving preferential treatment to any person or company for any reason.”

Like many federal departments, it also has an independent inspector general. But Ms. Sleeper said that she was troubled by the behavior of the agents who interviewed her. A few weeks later, she sent an email to the inspector general’s office saying that the agents sounded biased against Ms. Baumann and predisposed to find fault.

She said one of the agents told Ms. Sleeper that he had heard that Ms. Baumann was “a ‘Devil Wears Prada’ type” and that she “was a bitch.”

“I found this statement to be astronomically shocking and inappropriate coming from a man who was representing a federal investigation whose purpose was to be in a place of inquiry,” Ms. Sleeper said in her email. “I expressed my opinion that it’s not a respectful or appropriate way to speak about women, and that I don’t think it’s appropriate to be repeating that term to me.” She wrote that the agent responded that he “didn’t need a lecture.”

Epin Hu Christensen, a counsel to the inspector general’s office, said the office could not comment on the substance of its investigations. “As a general matter,” she said in an email, “we adhere to the Council of the Inspectors General on Integrity and Efficiency’s Quality Standards for Investigations.”

Part of the Cooper Hewitt board’s displeasure stems from the unorthodox structure of the Smithsonian, which oversees 19 museums and galleries and the National Zoo, almost all located in the Washington area. The Cooper Hewitt board oversees the day-to-day operations of the museum and contributes significant funds, but it technically has only an advisory role.

The share of Cooper Hewitt’s budget that comes from the government is about half that received by the Smithsonian’s other museums. It is the only one to charge admission, and it relies heavily on donations, including gifts from its board.

In 2014, for example, the museum received a $10 million donation from the family foundation of the longtime board member Barbara Mandel. And the interior designer Agnes C. Bourne, a current vice president of the board, donated $2 million toward the museum’s 1996 renovation. Ms. Bourne commended Ms. Baumann’s leadership, adding, “I can’t imagine anything she would do that would be a problem.”

Another board member, the author Kurt Andersen, said that Ms. Baumann “has done an extraordinary job, overseeing a great renovation and expansion and reinvigoration of the museum.”

“If her alleged infractions are what I understand them to be, the punishment seems crazily disproportionate,” he added. “I really hope they’ll reconsider.”

Review: A Choreographer Finds Her Bliss in Bach

Don’t Tell, but Jane Alexander Is Also a Comedian

‘The Call of the Wild’ Is Heard at the Box Office

The best podcasts to fall asleep to, for every type of insomniac

Earth Harp: The man behind the unique instruments ‘epic’ sound