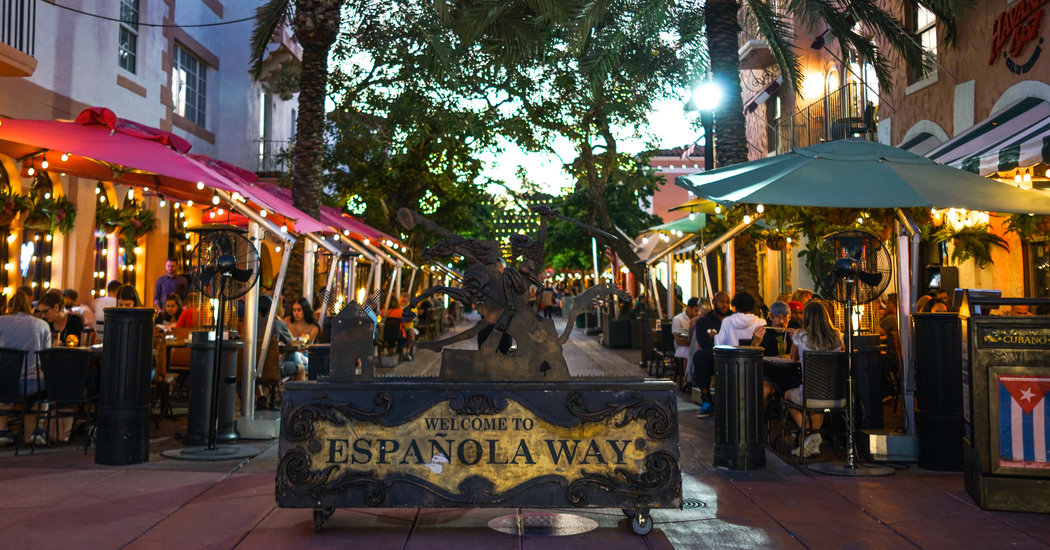 MIAMI BEACH — Back in the 1920s, when Miami Beach was still mostly mangrove swamp and mosquitoes, two real estate developers decided to build a place that would look like a Spanish village to help bring in winter visitors.

It came to be known as Española Way — a block-long promenade with sidewalk cafes and salsa, samba, jazz and techno rhythms that often inspire dancing in the streets — and it is now a historic district, a short walk from the headquarters of Art Basel Miami Beach.

It hums with table talk. The palm trees and lamp posts are wrapped in strings of white lights. Waiters at Hosteria Romana sing happy birthday in Italian.

“It feels like Little Italy in New York,” said Joseph Jabs, 26, an electrician from Manhattan, drinking a strawberry daiquiri at the Havana 1957 restaurant and celebrating the 28th birthday of his girlfriend, Leslie Seda, a nurse from New Milford, N.J. She was having a mojito with a dash of guava juice.

The low-rising peach-colored buildings with Moorish arches are trimmed with contrasting white stonework and wrought iron. “It looks very similar to parts of Madrid, Barcelona and Seville,” said Lia Bustamante, a photographer from Buenos Aires.

Española Way has a colorful history of boom and bust, illegal gambling parlors, bookies and sex workers, small-time drug dealers and years as a haven for artists. It declined in the 1970s along with the rest of South Beach. Part of the Clay Hotel — now being upgraded — became a youth hostel. Artists worked in subsidized lofts at the Española Art Center before it gave way to the El Paseo Hotel.

The camera loves Española Way. Miami Vice, the 1980s television series of flash and bang Miami, showed the street in a dozen episodes. Robin Williams shot parts of “The Birdcage” on Española Way and John Travolta was filmed there in “Chains of Gold.” Elton John sang “A Word in Spanish” in a music video on Española Way, and the rapper Pitbull shot a music video that has been viewed more than 16 million times.

In February, for the second year, the South Beach Wine and Food Festival cordoned off Española Way for a midnight tasting. Rev Run, the rapper and D.J., worked a turntable with booming speakers across from the red umbrellas of Hosteria Romana. Earlier, Microsoft and the United States Conference of Mayors took over Española Way for private parties.

On evenings like that, the brothers, Mario and Vincent Tarricone, transplants from the Bronx, hire a recent arrival from Cuba’s cigar making industry and set him up at a table in front of their humidor, bar and restaurant, Española Cigar, where you can buy an $8 Scotch or a $600 bottle of Champagne or a $1,600 bottle of cognac.

For some, Española Way is a bit too animated. But A La Folie is a quiet bistro off to one side. And the owner, Olivier Corre, from Paris, said most of his customers live nearby. “We don’t get that many tourists,” he said.

The walk to Española Way from Art Basel headquarters at the Convention Center is its own art and culinary tour. It takes you past the Frank Geary-designed New World Center symphony hall and, heading south on Drexel Avenue, across Lincoln Road, an Art Deco walking street with manicured palm trees and sidewalk restaurants. Thirteen Botero sculptures are being displayed for Art Basel. At Drexel Avenue and Lincoln Road, you see Yuca, a Cuban restaurant, and Paul, a French Bakery and cafe.

Toward the ocean on Lincoln Road, the limestone office building at 420 is a well-preserved example of the streamline moderne style of Art Deco. Near the ceiling of the lobby is a ribbon-like, 1945 mural by the Russian-American artist Leo Birchansky. On the third floor is the David Castillo Gallery of contemporary art.

The oldest church on Miami Beach, the Miami Beach Community Church, built in 1921, is on Drexel Avenue at Lincoln Road. Its stained-glass triptych looks across the avenue at one of Miami Beach’s newest businesses, the Time Out Market Miami, a dazzling nearly-block-long, high-ceilinged food hall with hip lighting, pulsating music, three bars, 18 places to eat, many with a Latin accent, and an industrial, stainless-steel exterior.

The last two blocks along Drexel to Española Way are lined with modest Art Deco and Mediterranean Revival-style apartment buildings and bungalows, palm trees and shrubs.

One afternoon in November, 40 Polish tourists were checking out of the El Paseo Hotel. Fernando Rodriguez, 32, and Rosa Rodriguez, 23, of Madison, Wis., were on their honeymoon and six exotic dancers from St. Louis — traveling in their work clothes — were drinking kiwi margaritas at a table outside the Oh! Mexico restaurant.

Ms. Rodriguez, an assistant to an optometrist in Madison, said she loved the energy. “The atmosphere is great,” she said. “It’s nice to be here in the center of everything.”

In Didier William’s Art, There Is More Than Meets the Eye

For Faith Ringgold, the Past Is Present

The Mummy Speaks! Hear Sounds From the Voice an Ancient Egyptian Priest

For Faith Ringgold, the Past Is Present