For Cecilia Vicuña, ‘Consciousness Is the Art’ 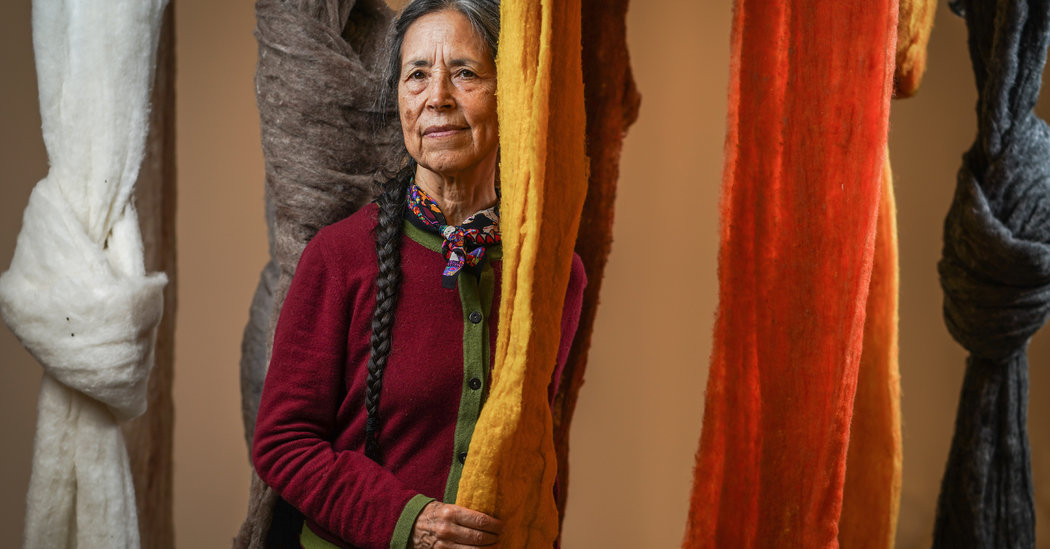 Cecilia Vicuña’s current retrospective, “About to Happen,” has been promoted by curators far and wide as the “first major, U.S. solo exhibition by the influential Chilean-born artist.” But that is not completely accurate.

Ms. Vicuña, 71, had a solo show in 1992 at the University of California Art Museum, in Berkeley. She was the subject of another one-person exhibition in 1999 that traveled to top galleries in New York City, Houston and Buffalo. And she headlined yet another exhibition three years later that filled the Boulder Museum of Contemporary Art in Colorado.

But as the sculptor, poet and activist explained, none of those efforts turned out to be as “major” as their presenters had hoped. There were a few positive reviews in the news media, though the public was largely uninterested.

“Nobody came,” she said in an interview last month from her home in TriBeCa. “It was about climate change, and no one was interested in climate change then.”

Things are different this time around, in an age of global panic over the planet’s well-being. “About to Happen” was met with sizable crowds when it debuted at the Contemporary Arts Center in New Orleans in March 2017, generating sufficient enthusiasm to sustain a national tour that has stopped at the Institute of Contemporary Art in Philadelphia, the Henry Art Gallery in Seattle and, in a twist of fate, Berkeley’s university art museum.

The exhibition has now arrived at the Museum of Contemporary Art, North Miami, where it is likely to be seen by a slew of curators and collectors attending Art Basel Miami Beach.

While the public’s attention may have shifted in recent years, the artist notes that her work has held to the same themes for more than half a century, going back to a certain January day in 1966, when she was 17. She vividly recalls standing on the beach in Concón, Chile, not far from her hometown, Santiago, and in the shadow of an oil refinery that had been built on an ancient Andean ritual site.

She suddenly became aware of how every object and action in the universe was connected. She picked up a stick, turned it vertically and stuck it in the sand. It was that moment, she said, when her art began.

“When I look at these little things, I immediately see in them what they want to be, what they can be,” Ms. Vicuña said. “I see this potentiality of place, of balance, of asymmetry. This is what moves me.”

She has made countless variations of that first piece ever since, dubbing them “palitos,” or small sticks. They connect to a larger body of work she calls “Lo Precario,” which includes her series of precarious sculptures, delicately assembled from rocks, feathers, string, driftwood, bones, thread or little bits of garbage she encounters on walks along coastlines. Most often, she makes them in place, leaving them vulnerable to rising tides and changing weather.

The works draw attention to the most basic details of the environment, and there is an implication in them that once you are acutely aware of any object, you are responsible for its welfare.

“Consciousness is the art,” she wrote in a book of poems and essays published to coincide with the new exhibition. Awareness of a stick leads to awareness of a tree, then to land and the people who occupy it, to the fragility of entire cultures.

The precario are at the core of “About to Happen,” many created specifically for the exhibition, or refashioned from remnants of older works she has managed to preserve over time.

The exhibition’s curators, Andrea Andersson and Julia Bryan-Wilson, combine them with other objects drawn from a multimedia oeuvre that has expanded to include 22 published art and poetry books, paintings, video, music, and performances. Many of the pieces are recycled from the artist’s long list of public exhibitions, which began with her splashy 1971 debut, “Otoño,” (“autumn”) a show that had her spreading decaying leaves across the floors of Santiago’s elegant Museo Nacional de Bellas Artes.

The current retrospective also includes examples of another series she is known for making, updated versions of quipus, the complicated constructions of cords and knots used millenniums ago as accounting tools by the Incas and other indigenous communities the artist traces her ancestry to.

In each location, Ms. Vicuña has created a new quipu that responds to local geography and current, climate-related events. “For example, in Berkeley, she wanted to make a new one because there were five forest fires raging as we were opening,” Ms. Andersson said.

The Miami version of “About to Happen” will have its own additions. Recently, Ms. Vicuña started replicating a series of paintings she did decades ago — some from memory because they had been lost, others because she envisioned a new way of rendering the scene.

The upcoming show will feature a “decolonized” portrait of Vladimir Lenin that she first made while living in Bogotá, Colombia, in 1978 while a spate of anti-government protests unfolded in the city, as well as her revision of that painting from a year ago. “So it’s a painting from 2018, but of a painting from 1978,” Ms. Andersson said.

The re-paintings underscore an aspect of the artist’s work that the show’s curators believe is key to understanding it — in a sense it has no beginning and no end. No object she produces is so precious that she restricts herself from abandoning it, letting it decay or get washed away, and remaking it again later to discover new aspects of it. Even a piece started years ago remains “about to happen,” as the exhibition’s title explains.

“The fact that it falls apart, that is its beauty,” Ms. Vicuña said. “This is the key to a ritual act, you repeat it and it’s always different. Even though it’s the same, it’s different.”

Why Do Trump Supporters Support Trump?

‘Star Wars: The Rise of Skywalker’ opens with a low (LOL) $175 million