For Teresita Fernández, Personal is Political 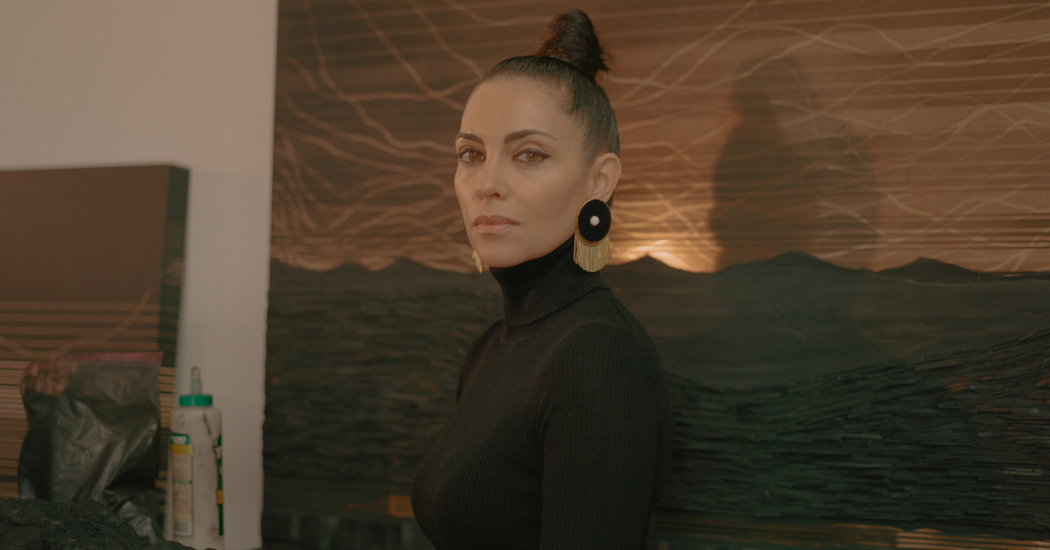 The beautiful and experiential installations of Teresita Fernández allude to landscapes — historical, geological, internal, all in a heady mix. Her “Island Universe,” for example, a stunning wall-sized mosaic composed of smokey chunks of charcoal at the Ford Foundation in New York, renders the seven continents as a horizontal daisy-chain of land masses. It suggests the ancient footpath of humankind, a time long before nations and borders.

“The history of land formation is also the history of migration,” said Ms. Fernández, 51, at her studio in Brooklyn, where the Miami-born, MacArthur award-winning artist has been based since 1998. Her work and career are now being celebrated in her first comprehensive survey exhibition at the Pérez Art Museum Miami.

“Island Universe” was inspired by R. Buckminster Fuller’s “Dymaxion Map” that peeled the globe like an orange, she explained, and sought to undo our cultural biases based on north and south. “All this up/down, privilege/third world, modernity/primitivism is based on these cardinal directions,” said Ms. Fernández, who stripped such assumptions from her representation of the world. She is interested in how viewers inevitably try to locate where they’re from within this disorienting landscape.

The Miami exhibition, titled “Elemental,” brings together more than 20 years of the artist’s large-scale sculptures, installations, drawings and wall reliefs and seeks to challenge viewers’ perceptions, both optically and culturally. Shimmering works suggest gardens, pools, waterfalls, clouds and fire, and are often composed of clusters of mirrored glass cubes or metallic steel shapes or glazed ceramic tiles that flicker and reflect people moving through, around or under them.

“People are very seduced by their own image and the exercise of looking for themselves,” said Ms. Fernández, who uses that as a strategy to hold viewers’ attention as they may contemplate what kind of landscape they’re experiencing.

In recent years, she has frequently incorporated radiant gold on panels evoking nighttime horizons — a direct reference, she said, to the extraction of gold by Spanish conquistadors who ravaged the land of indigenous people in the Americas.

“Teresita’s beginning to zero in on facets that relate very specifically to landscape in terms of colonial history,” said Franklin Sirmans, director of the Pérez, which organized the exhibition with the Phoenix Art Museum, where it will travel before going to the New Orleans Museum of Art. “That’s part of the evolution of Teresita Fernández as an artist. Those things were always there, but they were hidden and shrouded in some ways.”

The artist has never wanted to limit the interpretation of her deeply researched and layered work. But in recent years she has been more forthcoming about its personal and political content, including prompts in the titles such as “Charred Landscape (America)” (2017).

“Neutrality is no longer an option,” she said in a lecture shortly after the 2016 presidential election.

In New Orleans, she recently completed a 60-foot mosaic of glazed ceramic tiles for the museum’s sculpture garden titled “Viñales (Mayombe Mississippi),” part of a series begun in 2015 after her first visit to Cuba, her parents’ homeland. The lush, swirling greens and browns of the piece reference the rural valley of Viñales, with its system of caves where indigenous people had lived, and where runaway slaves from surrounding plantations once took refuge.

But Ms. Fernández’s abstract-looking image was in fact based on a CT scan of a green malachite rock from Mayombe in Congo, a site of Africans’ forced migration and a landscape that reminded her of Viñales.

“The landscape inside the rock was exactly like the big landscape outside,” said Ms. Fernández, who likes to conflate different scales. She noted that Congo Square in New Orleans was once the heart of the slave market and where people would celebrate Mardi Gras.

“Here’s this place that’s Africa, Cuba and New Orleans,” she said of the piece she calls a “stacked landscape.” “You can actually see your own reflection in the surface and it’s like multiple times and places happening simultaneously.”

For the artist, it is meaningful that her exhibition is going to “three relevant cities that have majority Latinx populations,” she said, particularly to Miami, which was formative to her visual sense of the world. Her parents immigrated there from Havana as teenagers.

“They arrived to a Jim Crow South,” said Ms. Fernández, noting that the city was a very different place then from what the art world now associates with Art Basel Miami. Her parents were told to go back to where they came from; she remembers being told to speak English.

“A lot of what we’re watching on the news, it’s not new,” she said.

Early in her career, she resisted discussion of personal narrative, wary her work would be reduced to ethnic clichés. The artist Nari Ward, who is also bicultural and has known Ms. Fernández since 1996, understands the fear of being pigeonholed by identity.

“As you’re coming up through the ranks, you’re trying to fight for what your vision is,” said Mr. Ward (he and Ms. Fernández are both represented by the Lehmann Maupin gallery). “As an older artist with a reservoir of confidence and resources, Teresita’s thinking about what is the legacy she wants to claim.”

Becoming an activist outside the studio was not an obvious fit for Ms. Fernández. But frustrated by what she termed the “invisibility” of Latinx artists and curators at a high level in the art world, she spent a year organizing the U.S. Latinx Arts Futures Symposium in 2016. The event, hosted and funded by the Ford Foundation, brought together 200 artists, museum directors, scholars, curators and funders to talk about the lack of Latinx representation. (While Latinx people are fastest growing ethnic group in the United States, they hold only 3 percent of museum leadership.)

Scott Rothkopf, chief curator of the Whitney Museum of American Art, told The New York Times in 2018 that the symposium was influential in his hiring of Marcela Guerrero as the museum’s first curator specializing in Latinx art.

“Teresita is revealing the complexity of the Latinx conversation and taking a public leadership role in holding the mirror up to the art world,” said Darren Walker, president of the Ford Foundation, which convened a second iteration of the symposium last month.

“If the show and my own narrative expands people’s understanding about being an artist from Miami, then I think it’s an amazing thing,” she added. “There’s a lot of young artists in Miami who do not see versions of themselves in the art world.”