How Has Donald Trump Survived? 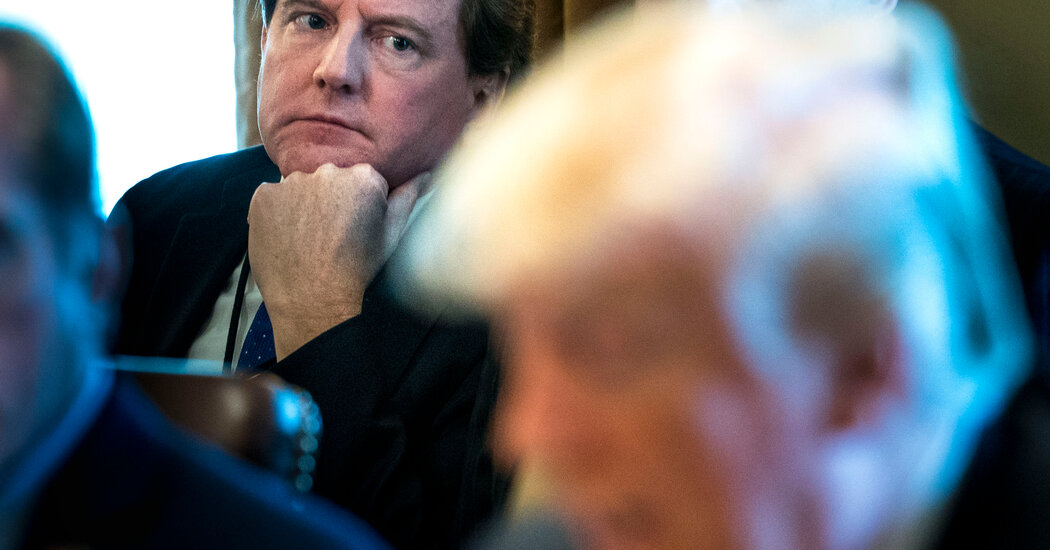 DONALD TRUMP V. THE UNITED STATES
Inside the Struggle to Stop a President
By Michael S. Schmidt

When a Republican-led Senate committee issued a nearly 1,000-page report in mid-August that detailed the prodigious extent of the contacts between Russian officials and members of Donald Trump’s 2016 campaign team, it felt a bit like a dispatch from a vaguely familiar reality — a prepandemic realm when we could mostly agree to focus on foreign interference in American democracy, and when the Trump presidency felt as if it were hanging in the balance while it awaited word from Robert S. Mueller III. This is the world that forged Michael S. Schmidt’s “Donald Trump v. the United States.” It vividly resurrects that actually-not-so-distant era by unspooling the occasionally staggering stories of two administration figures who were central to the investigative sagas that dominated the early Trump years, largely thanks to their attempts to constrain him.

The subjects are both all too familiar and, Schmidt implies, underappreciated in their significance in shaping Trump’s presidency. Schmidt recounts with unsparing intimacy James Comey’s arc from the 2016 election to his 2017 firing from the F.B.I. directorship, and he documents the relentlessly uncomfortable White House tenure of the former general counsel Donald F. McGahn II, who, he points out, “was in charge of Trump’s greatest political accomplishment, and he found himself caught up as the chief witness against Trump.” The result is a revelatory portrait of the events that led to the investigation of Trump for obstruction of justice, and his repeated attempts to control the Department of Justice. It is not about the alleged collusion with Moscow, and in fact Schmidt reports that Mueller’s investigators “never undertook a significant examination of Trump’s personal and business ties to Russia,” largely thanks to the deputy attorney general Rod Rosenstein’s intervention.

Schmidt, a New York Times correspondent in Washington who was part of two teams that won Pulitzer Prizes in 2018, including one for coverage of Trump’s Russian-inflected scandals, portrays an administration in which all aides may as well always have a resignation letter ready as a safeguard against an angry, flailing president detached from commonly accepted reality. This is a meticulously reported volume that clearly benefits from the author’s extraordinary access to many of the relevant characters, but also from his subjects’ tendency to record, in detail, their time around Trump.

Whereas recent years have been packed with high-impact reported books about Trump’s erratic behavior and his administration’s backbiting — Bob Woodward’s “Fear,” Philip Rucker and Carol Leonnig’s “A Very Stable Genius” and Jonathan Karl’s “Front Row at the Trump Show” come to mind — “Donald Trump v. the United States” is more closely tailored to the efforts to rein Trump in. As such, it may be unlikely to become a go-to for general conclusions about Trump’s character. But it adds significantly to the public understanding of the Mueller investigation and Trump’s war against it.

The narrative is sometimes cinematic. It opens with Schmidt chasing down McGahn outside the White House’s front gates and eventually getting him to concede, “I damaged the office of the president; I damaged the office.” It’s a breathtakingly revealing admission from the White House’s chief lawyer and the architect of Trump’s effort to appoint as many conservative judges as possible. (Schmidt says, “I thought he was still understating the gravity of what he had done.”)

McGahn, a staunch libertarian, was frequently in over his head with the lawless president he nicknamed “King Kong,” and he struggled with his highly unusual extended contact with Mueller’s team. Still, despite getting close to resigning, McGahn stuck around far longer than his apparent misery and frequent attempts at principled stands would suggest, largely because of his judicial project’s success. It was only after Trump granted a woman clemency at Kim Kardashian’s request that McGahn knew he truly had to leave the White House. He could no longer abide the accumulation of Trump’s actions.

Then, in the annals of unsustainable relationships with Trump, there’s James Comey. His early interactions with the president, like the one-on-one dinner at which Trump requested Comey’s loyalty, have been described repeatedly. But in Schmidt’s granular telling, the relationship was especially agonizing because of a fundamental disconnect between the two men.

Comey was always deeply interested in maintaining his and his agency’s public credibility — especially after his wildly controversial intrusions into the 2016 campaign over Hillary Clinton’s emails. After he was fired by Trump, he text-messaged a friend: “I’m with my peeps (former peeps). They are broken up and I’m sitting with them like a wake. Trying to figure out how to get back home. May hitchhike.” It’s just one example of the clearly extensive access Schmidt had to Comey and his wife.

“Donald Trump v. the United States” is full of gritty details about what it’s like for a plugged-in journalist to report on Trump’s intrigue, ranging from the time Schmidt shepherded a valued source to and from the airport, to his learning, secondhand, about a Justice Department official soliciting dirt on Comey at a Cinco de Mayo party. At one point, Schmidt writes, he shattered his cellphone and didn’t fix it for a week because there was too much news; he ended up with pieces of glass in his hands.

More interesting, however, is the constant flow of shocking anecdotes: Schmidt writes that Mitch McConnell fell asleep during a classified briefing on Russia, for example, and he details the F.B.I.’s shambolic reaction to evidence of the hacking in 2016, including an unresolved disagreement over how to handle the material. Describing Trump’s unexpected November 2019 visit to Walter Reed National Military Medical Center, he reports the White House wanted Mike Pence “on standby to take over the powers of the presidency temporarily if Trump had to undergo a procedure that would have required him to be anesthetized.” (The vice president never had to take this step.)

For all its revelations, this is not an inside look at Mueller’s investigation itself, and over half of Schmidt’s story goes by before Mueller is even appointed. At times, too, it wanders from the obstruction fights at its heart. Still, if the furor around the investigations into Trump’s last campaign feels like ancient history as the nation faces a pandemic, a civil rights reckoning and another election, “Donald Trump v. the United States” nevertheless offers one more startling dissection of the Trump presidency. Ultimately this book about “the struggle to stop a president” is, in many ways, a tale of how he survived.

Barbra Streisand, Patti LaBelle and Dolly Parton on Their Most Memorable Performances