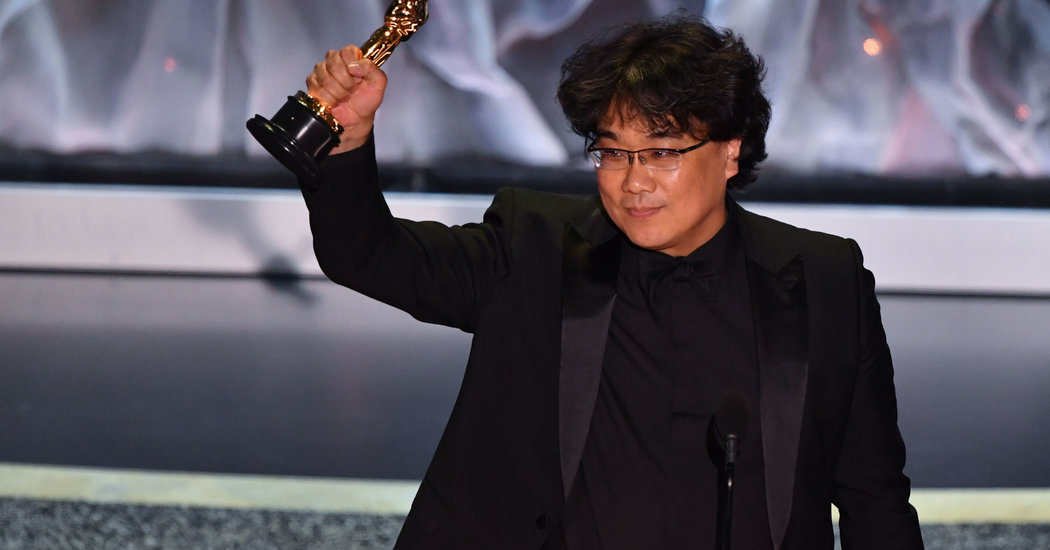 With an Oscar in his left hand and a microphone in his right, Bong Joon Ho instructed a cheering crowd to drink.

It was just hours after his biting thriller “Parasite” pulled off a historic best-picture win Sunday, and Bong had been called to the stage at the film’s Soho House after-party in West Hollywood. With three acceptance speeches already under his belt (for best director, best international feature and best original screenplay, the South Korean director had little desire to say more, and he eventually passed the microphone to Tom Quinn, whose company, Neon, distributed the film in the United States.

“This is a win for all of us tonight,” Quinn declared, his voice rising like a world-wrestling impresario. “We put the rest of this industry in check, because cinema won!”

With that, he raised the microphone into the air, and the crowd screamed.

Nothing encourages hyperbole like Oscar night, but at that moment, Quinn’s enthusiasm was contagious. “Parasite” had become the first film not in the English language to win best picture, a victory that felt like it could herald the start of something new.

But will it? In Hollywood, many executives only pay attention to the wider world when they’re trying to goose the international take of their superhero movies. Can a best-picture breakthrough like “Parasite” transform the way business is done, or will it seem like a blip in 10 years’ time?

Certainly, it should pay dividends for Bong, who emerges from Oscar night an A-list auteur. Already a major cinematic figure in South Korea and a critics’ favorite elsewhere, Bong has had a tricky time of it since he came to Hollywood: Harvey Weinstein nearly buried his U.S. debut “Snowpiercer” when Bong wouldn’t agree to major revisions, and his starry follow-up, “Okja,” went to Netflix when no other studio was eager to finance an effects-laden genre hybrid with a significant amount of scenes in Korean.

But after the success of “Parasite,” which could soon become the fourth highest-grossing foreign-language film of all time in the United States, Bong will join an elite group of international directors like Guillermo del Toro and Alfonso Cuarón who can command top-tier interest from Hollywood. Already, HBO won a fierce bidding war for a “Parasite” limited series that Bong will create with Adam McKay, and I’d expect even more suitors once Bong mounts his feature-film follow-up, especially since he’s said to be working on a new English-language movie.

Still, how big will the “Parasite” halo be when it comes to other international fare? While Netflix invests heavily in acquiring foreign-language films to better serve its worldwide streaming audience, other studios have historically been more hesitant, since the upside at the domestic box office can be limited. It’s possible that a breakthrough like “Parasite,” with its fleet editing and relatable subject matter, can help cultivate a new audience that had previously associated subtitles with glacially paced art films.

It’s just as likely, though, that “Parasite” will pay off only for the films that seem most similar to it. When “Crouching Tiger, Hidden Dragon” became a massive, Oscar-nominated hit in 2000 — with its take of $128.1 million, it’s still the highest-grossing foreign-language import at the U.S. box office — it mainly just paved the way for a handful of other Asian martial-arts films to find domestic distribution. Certainly, studios will be prowling this year’s Cannes Film Festival eager to find the next “Parasite,” but a film as idiosyncratic as Bong’s will prove tough to clone.

The most notable ripples from the “Parasite” victory, then, may be seen in the Oscars themselves. The Academy Awards have come in for no shortage of criticism over the last decade that they are too white, too insular and too devoted to milquetoast crowd-pleasers. “Parasite” bats back those criticisms, and additionally restores an anything-can-happen element to an event that had become increasingly predictable. A vote for “Parasite” served as more than just a cast ballot: It was an investment in the Oscars’ future as a relevant institution.

At the Governors Ball following the show, the former academy president John Bailey told me that the “Parasite” win could be traced in large part to the more international membership the organization has cultivated over a yearslong diversity drive. That rapid expansion of the academy has still produced lineups that can feel homogeneous: The directing category this year was still made up of five men, and the “Harriet” best-actress nominee Cynthia Erivo was the only bulwark against another round of #OscarsSoWhite.

Still, many of the wins on Oscar night went to women and people of color, and “Parasite” claimed several of them. As a testament to broadened horizons, “Parasite” proved to be an effective billboard, but it also served as a testimonial for good taste: Nearly as rare as a foreign-language film claiming best picture is an outcome where the most acclaimed nominee of the year actually does take the top prize. What “Parasite” can still provoke remains to be seen, but what the film has already accomplished is pretty remarkable, no matter who the microphone gets passed to next.

Remembering Pop Smoke, a Rapper Who Brought Brooklyn to the World

‘The Masked Singer’ Reveals the Identity of Elephant: Here’s The Star Under the Mask – Variety