In Didier William’s Art, There Is More Than Meets the Eye 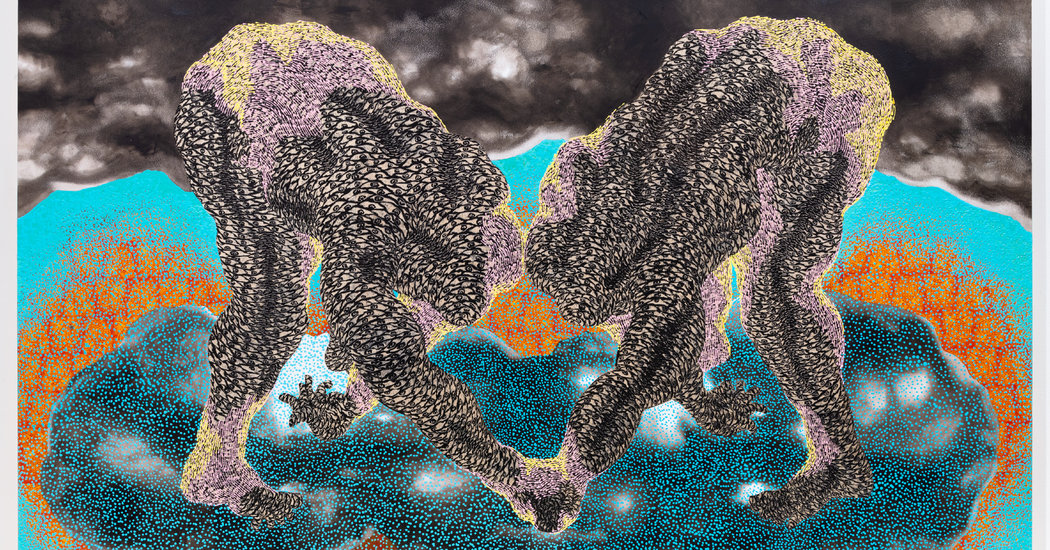 PHILADELPHIA — You are being watched.

It is difficult to escape that sensation when viewing the work of Didier William, a 36-year-old Haitian-American artist who will be exhibiting for the first time at Art Basel Miami Beach. His three enormous paintings destined for the fair, which are part of a larger series he has tentatively titled “Broken Skies: Vertières,” all depict huge, amorphous bodies whose skin is covered with narrow, piercing eyes.

The James Fuentes Gallery in New York will present these pieces in the Nova section against a backdrop that is also dotted with eyes. For Mr. William, this repeating symbol is both a shield from — and a response to — an onlooker’s curious appraisal.

“The eye motif developed around 2014 or 2015 as a way to return some of that gaze back onto the viewer,” he said in an interview in his studio here.

As a gay black immigrant, Mr. William knows what it is like to be stared at. Born in Port-au-Prince, he came as a Creole-speaking 6-year-old to Miami, where he lived with his parents and two older brothers. He spent his youth “closeted,” he said, in a city where “Haitians were relegated to a kind of second-class citizenry.”

At the same time, Miami was also where teachers recognized his talent and steered him toward the New World School of the Arts, a specialized public school that served as a springboard to a degree in painting from the Maryland Institute College of Art and a master of fine arts from Yale. The significance of his debut at Art Basel — where each of his paintings will be priced at $65,000 — is not lost on him or his dealer, who submitted his work there partly because “of the importance of Miami in shaping his identity and narrative,” said James Fuentes, the gallery owner.

Mr. William’s art, however, is never about just one place or person. “This idea that we don’t exist as singular bodies or singular identities, I think, has always been very much part of my work,” he said. In these paintings, “the overwhelming amount of eyes serves that.”

The figures are important, too. Mr. William, whose career in academia led him to move to Philadelphia three years ago to become chair of the M.F.A. program at the Pennsylvania Academy of the Fine Arts — a position he recently left — embraced abstraction for a while. But he returned to more figurative work after the 2012 killing of Trayvon Martin, an unarmed black teenager who was shot to death in Sanford, Fla., by George Zimmerman, a neighborhood watch volunteer who was ultimately acquitted of second-degree murder. In Mr. William’s view, those events began with one man’s act of looking — and assuming. The bodies Mr. William has introduced into his work are deliberately unidentifiable, neither male nor female nor even always human.

“The viewer,” he said, “is never really let off the hook in terms of becoming specifically aware of how their gaze is gendering or racializing the figures.”

In other ways, however, Mr. William’s work teems with specific symbols. His paintings at Art Basel are filled with clouds, a new motif that he sees as both “an extraterrestrial space” and a reference to archives of information. The art features luminous colors and dotted patterns, whose staccato effects evoke “Broken Skies,” a title that alludes to the fractures caused by colonialism. The title’s other half, Vertières, is the name of the 1803 battle in which Haiti finally wrested its independence from France, a historical moment that is further reflected in the machete and shovels in the painting “Broken Skies: Nou poko fini,” whose Creole words translate as “We aren’t done yet.”

The shovel, in particular, represents the relationship of Mr. William’s forebears to their land, “one of the main reasons why Haitians were able to defeat the French in the first place,” he said. “For me it’s like this Excalibur.”

Haitian culture and mythology also infuse the other Art Basel works. “Broken Skies: Ouve pot la pou yo” takes its Creole title from the chorus of the song “Tande” (“Listen”) by the Haitian band Boukan Ginen. The phrase means “Open the door for them,” “them” being the loa, or voodoo spirits.

“Broken Skies: Tè a mi,” whose title translates as “The ground is fertile,” is “sort of a painting for my husband,” said Mr. William, who is married to Justin William, a psychotherapist. The two are planning to become parents, and a vibrant, fiery band on the work’s surface is subtly printed with the symbol for the loa’s fierce matriarch.

The art is layered materially, too. Preferring to work on wooden panels rather than stretched canvas, Mr. William carves each unblinking eye directly into the surface, a technique that connects painting with printing. (He is now an assistant professor of expanded print at the Mason Gross School of the Arts at Rutgers, a post whose odd title indicates the extension of the medium.) His works incorporate collage, oil paint and acrylic as well, making them as multifarious as the Afro-Caribbean diaspora itself.

Seeing this complex painting as a text, Mr. William does not expect everyone to read it the same way. “If my mom, an art historian, a master printer and an oil painter were discussing the work, and they came to four different conclusions about it, I would be O.K. with that,” he said. “One of the joys for me is layering as much information into the paintings as possible, and allowing my viewer to excavate any part of that they wish.”

Those who have bought Mr. William’s work include the Carnegie Museum of Art, the Minneapolis Institute of Art, private collectors and a British pop star who did not want his name published — all testimony to what Mr. Fuentes called its “universal appeal.”

It is art with “iconography that everyone can understand,” he said, “even though it has a particular intention and concept.”

For Mr. William, that intention is always to explore the diasporan experience and, he said, “to get closer to a truth that makes sense for black and brown people.” But he takes special pride in bringing this work to Miami in what feels like a homecoming.

“Home is never quite a singular locale,” Mr. William said, “which for me I think is a source of agency rather than a traumatic condition.”

From Nudes to the Nervous System, Studies of the Human Body