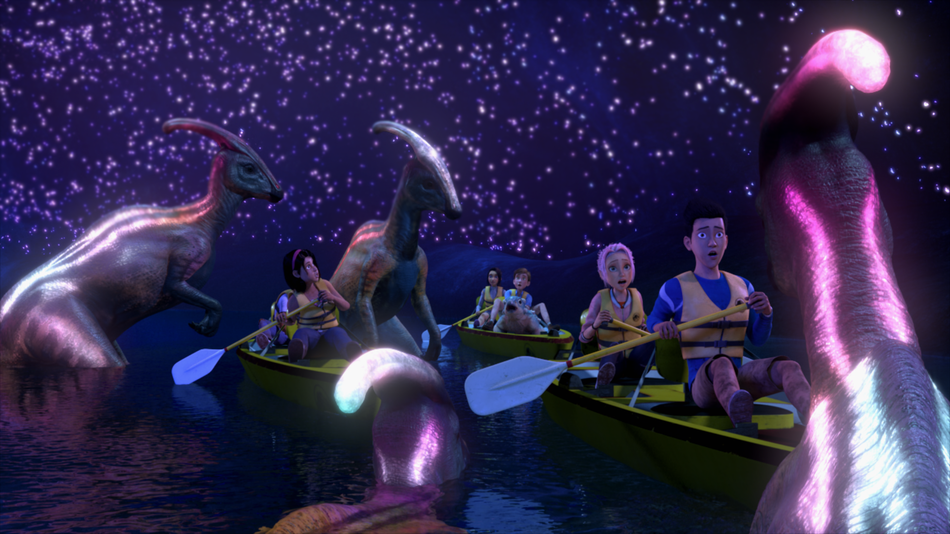 Welcome to Camp Cretaceous — the first-ever animated series to stomp its way into the Jurassic Park franchise and the name of the new adventure camp on Isla Nublar that’s featured within it. It’s got fierce dinosaurs, exciting locations, and a couple of incompetent counselors who are constantly losing track of the campers they aim to protect. And while this colossal kid show is predictable, it has enough entertaining action and humor to hold the attention of the young audience it was intended for.

The plot centers on Darius (Paul-Mikél Williams), a dino-savvy teenager who earns his way to Camp Cretaceous by being the first person to win a VR video game. There, he meets five other teens who, for varied reasons, also get to experience the adventure camp before the rest of the world does. There’s Kenji (Ryan Potter), a cocky rich kid who tries to take control; Brooklynn (Jenna Ortega), a famous social media streamer who is attached to her phone; Sammy (Raini Rodriguez), an enthusiastic camper who is used to ranch life; Yaz (Kausar Mohammed), an elite athlete who keeps to herself; and Ben (Sean Giambrone), an on-edge scardey-cat who struggles to acclimate to the jungle.  Read more…

Everything coming to Netflix in November 2020

‘Borat 2’ reviews are in. Here’s what critics think of it.

‘Borat’ is still good for some laughs, but he can’t shock us anymore

New in Paperback: ‘Speaking American’ and ‘The Seine’

On Jennifer Lawrence’s 30th Birthday, Revisit The Role That Made Her A Star

Lil Marlo, a Rising Atlanta Rapper, Is Shot and Killed at 30