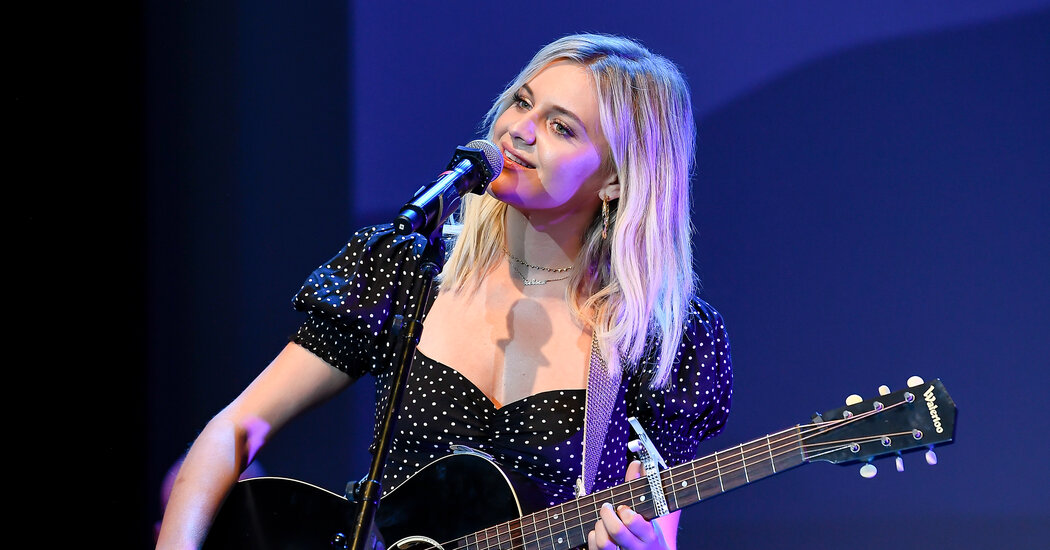 “Sometimes I’m a princess, dressed all ribbons and all curls,” Kelsea Ballerini sang on “In Between,” a searching ballad off her 2017 album “Unapologetically.” “And sometimes I just wanna scream, ‘I’m not a little girl.’”

Duality and stuck-between-ness have long been recurring themes in Ballerini’s music, and in her career itself — she’s not a cowgirl, but not yet a pop star. Still, the 26-year-old country singer and songwriter hasn’t explored her depths and contradictions as effectively as she does on a pair of loose, introspective albums from this year: “Kelsea,” the eclectic, pop-oriented record she released in March, and its stripped-down sequel, “Ballerini,” which comes out on Friday.

Ballerini has been straddling genre lines even before she started writing songs at age 13. Though she grew up on a farm in East Tennessee, her formative musical love was Top 40 pop. She has often been described as country music’s first post-Taylor-Swift-era female star, which in itself is something of a double-edged sword: Swift’s pop aspirations, fully realized on her 2014 record “1989,” eventually took her far beyond Nashville, and certain traditionally minded country gatekeepers have never quite forgiven the prodigy who sang “Tim McGraw” for the de-twang-ification of her sound.

Some of those traditionalists saw Ballerini — whose songs appealed to young girls while remaining respectfully grounded in the genre’s history — as an aptly timed replacement. Ballerini signed a record deal the year “1989” was released, and her debut single, “Love Me Like You Mean It,” went to No. 1 on the Country Airplay charts — something no female artist had done since Carrie Underwood in 2006.

But as time went on, Ballerini proved too complicated an artist to be slotted into someone else’s shoes. Plus, she was also coming into her own at a moment when controversy was raging about country radio’s systemic lack of support for female artists, and as crossover stars like Kacey Musgraves and Maren Morris were learning that mainstream accolades did not always translate to airplay or homegrown support.

Ballerini has fared relatively well in this environment (last year she racked up her fifth No. 1 on the country chart), but, as a female artist who has remained on an independent label, certain milestones have suspiciously evaded her. Last week, for example, she tweeted her disappointment at being shut out of C.M.A. Award nominations for a second year in a row. She also revealed what she’d done with her sadness when she’d been snubbed the previous year: She channeled it into writing “Homecoming Queen?,” the excellent first single from “Kelsea.”

Ballerini’s best songs often interrogate a private, particularly feminine space between image and reality: “I wear my pain like stilettos,” she sang on her first album, “as bad as it may hurt, no, you’ll never know.” “Homecoming Queen?” is a more mature and poignant variation on the same theme: “What if I told you the world wouldn’t end if you started showing what’s under your skin?” she sings on the chorus, her voice taking flight on a soaring melody. It sounds like a challenge to herself.

The rest of “Kelsea” makes good on that. The bubbly opener “Overshare” spills over with endearingly articulated insecurities; “The Way I Used To” is a blur of twangy licks and slurry, tequila-aided confessions. For all the comparisons to Swift, the contemporary pop release “Kelsea” most closely resembles, in spirit, is Ariana Grande’s 2019 “Thank U, Next,” another record that speaks in lowercase text-message cadences and deconstructs pop structures to make more space for idiosyncratic personality and direct-to-fan vulnerability.

To release a second, quieter version of an upbeat 2020 pop album might sound like a quarantine-era gimmick, and Ballerini has conceded that it is something of a response to the times; “Ballerini” represents, she told The Tennessean, “what the songs sound like now,” while “really having the time to listen to things differently.”

But there’s another reason to rerelease these songs in less flashy attire: The new versions assert the sometimes unfairly overlooked strength of her artistry and songcraft.

“If I let down my hair in the ocean air, will Tennessee be mad at me?” Ballerini wonders on the candid closer “L.A.” On “Kelsea” it’s a muted, acoustic musing that explores her “love-and-hate” relationship with a town that some consider the anti-Nashville. The version on “Ballerini,” though, features a bluesy electric guitar and a little more defiant swagger in her voice: “I’m on my third glass of wine trying to find conversation in a room with bigger names,” she confesses. “But other days I’m looking out for real estate.”

“Ballerini” is most effective when it dips a toe into aesthetics Ballerini hasn’t explored much on her previous albums. “Hole in the Bottle” has a light and rowdy honky-tonk verve, while “Love and Hate,” a ballad she co-wrote with Ed Sheeran, is transformed into a warmhearted bluegrass number.

Ballerini has emphasized that these re-recordings are not merely “acoustic versions” of “Kelsea” songs but complete reimaginings often featuring different keys and melodies. That’s what makes it feel less essential than the previous album, though: The best compositions on “Kelsea” didn’t need any new whistles.

Still, “Ballerini” is a welcome invitation to revisit a strong record that may have gotten lost in the cacophony of this year, or just fallen between the cracks of the country and pop worlds. Even if she’s too Los Angeles for Nashville, or too Nashville for Los Angeles, Ballerini is, fortunately, living in a time when many of those old dualities are beginning to blur.

After all, the genre-agnostic “Folklore” — Swift’s not-country, not-quite-pop quarantine release — is on track to be the year’s biggest, and likely most influential, success. Maybe Ballerini’s onetime forebear can again carve out a place for her, in the space between extremes.

On the Anniversary of 9/11, Lincoln Center Awakens With Hope

The clear winner of the 2020 election: Drugs

Almost 20 years on, Ivanisevic’s Wimbledon story is just as inspirational

Stunt artists who claim they’re behind the alien monoliths sell new ones for $45,000