Ken Jennings Wins ‘Greatest of All Time’ Title on ‘Jeopardy!’ 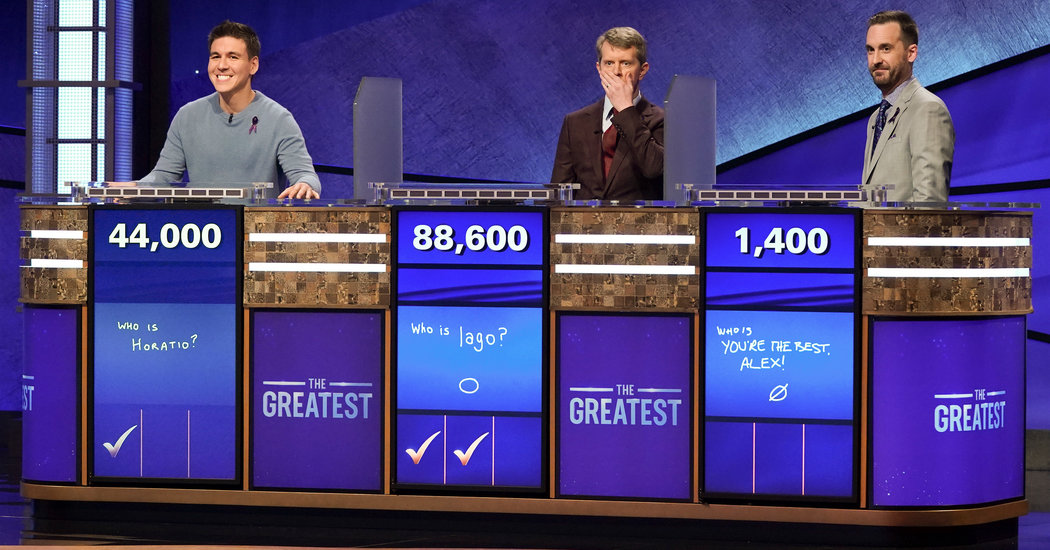 In spirited debates over who is the greatest athlete in the history of a sport, there is rarely the possibility for a definitive answer.

You can compare the scoring totals of LeBron James, Michael Jordan and Wilt Chamberlain, or the home run ledgers of Babe Ruth, Barry Bonds and Hank Aaron. But you’re never going to get all three players in their prime battling for bragging rights.

In “Jeopardy!,” the three most celebrated buzzer-hitters did just that.

Starting last week, James Holzhauer, Ken Jennings and Brad Rutter, who each have won millions of dollars on “Jeopardy!,” faced off in what the show called its “greatest of all time” tournament. And on Tuesday night, it came up with a final answer, as Jennings, 45, became the first of the powerhouse players to win three matches and thus, the title.

“It has taken 15 years for Ken Jennings to finally answer the question, ‘Is he as good as he appeared to be in that great run on Jeopardy?’” the host, Alex Trebek, said after his victory.

The key to Jennings’s victory on Tuesday, as it was throughout the tournament, was his willingness to bet large on Daily Doubles and his success in answering them correctly.

First, he bet all of his points on a clue about the Egyptian god of medicine. (“Who is Imhotep?”) Then, he doubled his points to 30,400 by producing the name of the 1951 play in which the main character’s dead husband has a tattoo of the title word on his chest. (“What is ‘The Rose Tattoo’?”)

In the first Final Jeopardy of the night, Jennings made a bold bet, shooting ahead of his competitors with a clue about an area of Greece that is synonymous with a rural paradise. (“What is Arcadia?”)

In the second game of the two-game match, Jennings appeared to be protecting his lead, betting less than all of his points on a Daily Double clue about United States vice presidents. But the outcome of the match was in question after Holzhauer doubled his points on his own Daily Double.

It was up to Final Jeopardy, a clue about Shakespeare: He has 272 speeches, the most of any non-title character in a Shakespeare tragedy. (The correct response is at the bottom for the article.)

With Rutter out of the running, he used his space on the board to write an appreciative note to Trebek. Jennings, who is usually comfortable in literature categories, responded correctly.

Since Holzhauer’s strong second game put him in position to win the match if he got the response right, Jennings’s wager was as conservative as could be: $0. But Holzhauer produced the name of a character in the wrong Shakespeare play, handing the victory to Jennings.

[Can you answer the clues that all three contestants missed?]

With the win, Jennings took home a $1 million prize. Holzhauer, 35, who won one match, and Rutter, 41, who won none and was largely outbuzzed and outguessed by his opponents, each received $250,000.

Jennings came in with a reputation for unmatched endurance: He won 74 games in a row in 2004 and, in the years since, no contestant has come close to that streak. After his extraordinary run, he was able fund a career as an author, writing books on topics like trivia and comedy. He’d pop his head back in to the world of “Jeopardy!” every so often to participate in a tournament and line his pockets even more.

When Holzhauer first appeared on the show last year and began winning by margins rarely seen before, fans speculated on how his big-betting strategy would match up to Jennings’s game play. When the “greatest of all time” tournament was announced, there was no question that in order to win, Jennings would have to bet as big as Holzhauer, who won 32 games during his streak and holds the top 16 spots for single-game winnings. The most he won in one game, $131,127, is more than $50,000 greater than the record that stood before he showed up in April.

Jennings’s seasoned trivia chops combined with a riskier betting strategy turned out to be a lethal combination. In the four matches, he found eight Daily Doubles, bet all of his points on seven of them and got seven right.

For his first Daily Double of the tournament, a particularly tricky clue that actually comprised three separate clues, Jennings looked mildly nauseous after betting all he had, then heaved a sigh of relief when Trebek, told him that his response was correct. Later on, Jennings looked more comfortable, and even once used Holzhauer’s trademark hand gesture, in which he mimes pushing all his poker chips to the middle of the table.

Holzhauer seemed to recognize his own impact on Jennings’s betting strategy, poking fun at his competitor on Twitter.

The three competitors had been playfully sparring over Twitter for the past week. Because the episodes were recorded in December, the players knew the outcome of the tournament the whole time — all they could do is sit back, banter and watch their best and worst moments play out on prime time. Holzhauer’s favorite target appeared to be Rutter, whom he often jabbed for his relative underperformance, once joking that Rutter had received a “certificate of participation” after the first three matches, because he wasn’t able to notch a single win.

The tournament, airing on ABC in prime time, attracted a wide and enthusiastic viewership. Last week, the tournament was the highest ranked television event on prime time television apart from N.F.L. playoff games, according to Nielsen data. The viewership climbed with each episode: from 14.4 million viewers for Tuesday’s opening match, to 14.9 million on Wednesday and 15.5 million on Thursday. By contrast, the season premiere of ABC’s “The Bachelor,” which had the same 8 p.m. Eastern time slot on Jan. 6, before the tournament started, received 6.1 million viewers.

The clues were seeded with subtle ABC plugs. One of the celebrities recruited to read clues on Tuesday, Ryan Reynolds, is an executive producer on an upcoming ABC game show. Another, Kareem Abdul-Jabbar, was on ABC’s “Dancing With the Stars.” Categories during the fourth match referenced ABC shows like “Modern Family,” “The Bachelor” and “The Good Doctor.”

While the tournament has been a hit, the regular season of the show, which has continued airing in its regular time slots, got a rare bit of unpleasant attention on Friday after unwittingly dipping its toe into the Israeli-Palestinian conflict. A clue about churches asked the contestants to name the location of the Church of the Nativity, and when one contestant responded, “What is Palestine?,” Trebek said she was incorrect. Another contestant’s response — “What is Israel?” — was deemed correct, sparking outrage online from people who didn’t think the game show should have been weighing in on a decades-old territorial dispute.

On Monday, “Jeopardy!” released a statement saying that it had realized while taping the show that the clue was “flawed” and “determining an acceptable response would be problematic,” so it voided the clue and replaced it with another. But, the show said, the original taping of the clue was broadcast accidentally.

Jennings’s victory bumped his all-time winnings up to $4.4 million, still $568,000 short of Rutter’s total. While neither Rutter nor Holzhauer can claim the title of “greatest of all time,” they still maintained their own records.

(The correct response: Who is Iago?)

What’s on TV Wednesday: An Adventure Series and ‘68 Whiskey’

What’s on TV Sunday: ‘The L Word: Generation Q’ and the Grammys

What’s on TV Wednesday: An Adventure Series and ‘68 Whiskey’

5 Classical Music Concerts to See in N.Y.C. This Weekend