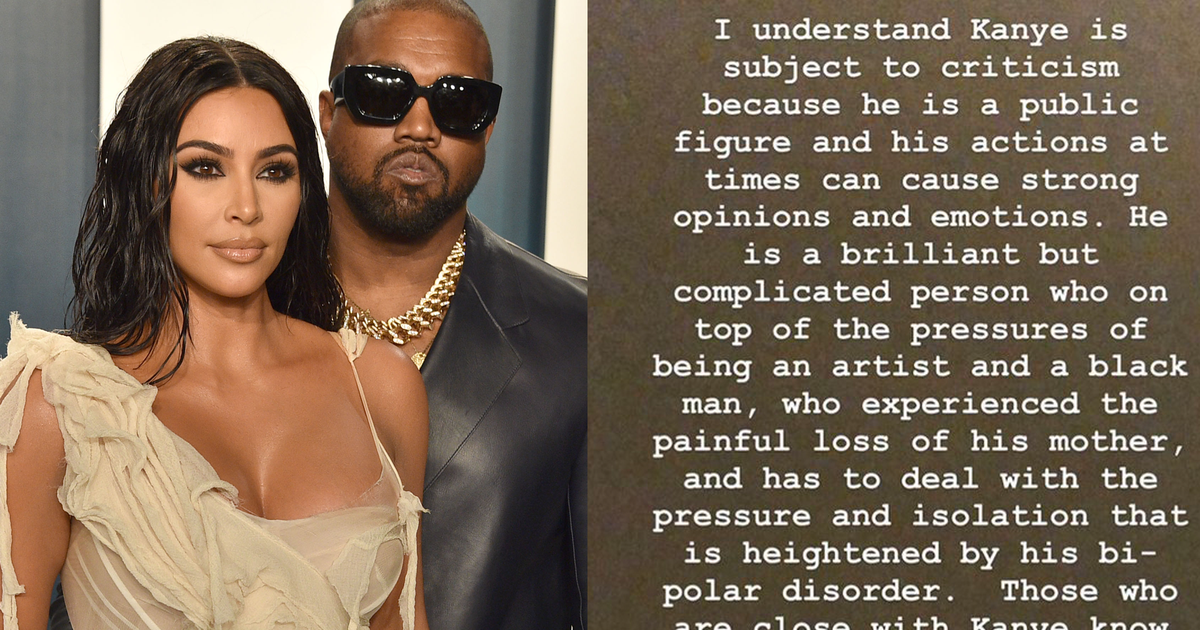 Following his surprise campaign announcement for the 2020 election, Kanye West has been drumming up controversy with statements on race and politics. But West has also been speaking out about his private life with his wife, Kim Kardashian.

West posted a series of now-deleted tweets in which he said he’s been trying to divorce Kardashian for two years. Hours later on Wednesday, Kardashian released a statement via Instagram stories concerning her husband:

While she doesn’t explicitly mention West’s recent behavior, Kardashian addresses how the stigma surrounding mental illness affects those who live with it and their loved ones. (West has bipolar disorder and first confirmed it publicly with the release of his album Ye in 2018.)

“I’ve never spoken publicly about how this has affected us at home because I’m very protective of our children and Kanye’s right to privacy when it comes to his health,” she wrote. “But today, I feel like I should comment on it because of the stigma and misconceptions about his mental health.”

Up until now, Kardashian has been largely supportive of West in public. When he announced his presidential candidacy, for example, she showed subtle support on Twitter:

Other times, she’s denied controversy surrounding West — such as when she refuted that West said that “slavery was a choice” on TMZ Live in 2018.

She has publicly discussed his bipolar disorder before. In her Vogue cover interview last year, Kardashian said that she and West were “in a pretty good place” with his diagnosis.

In her Instagram statement, Kardashian pleads for compassion and empathy. “Those that understand mental illness or even compulsive behavior know that the family is powerless unless the member is a minor,” she wrote.

She continued, “People who are unaware or far removed from this experience can be judgmental and not understand that the individual themselves have to engage in the process of getting help no matter how hard friends and family try.”

While the statement makes vague mention of Kanye’s “big dreams,” it was not immediately clear what the status of his presidential candidacy actually is. Whether the family will actually handle this privately — and whether the public will allow them to do so — also remains to be seen.

The best tweets of the week, including Pink Floyd, Gritty, and a massive skeleton

Wilford Brimley, Cocoon and The Natural actor, dies at 85

Shere Hite, Who Challenged Myths of Female Sexuality, Dies at 77

19 deals on desks, chairs, and accessories for your home office