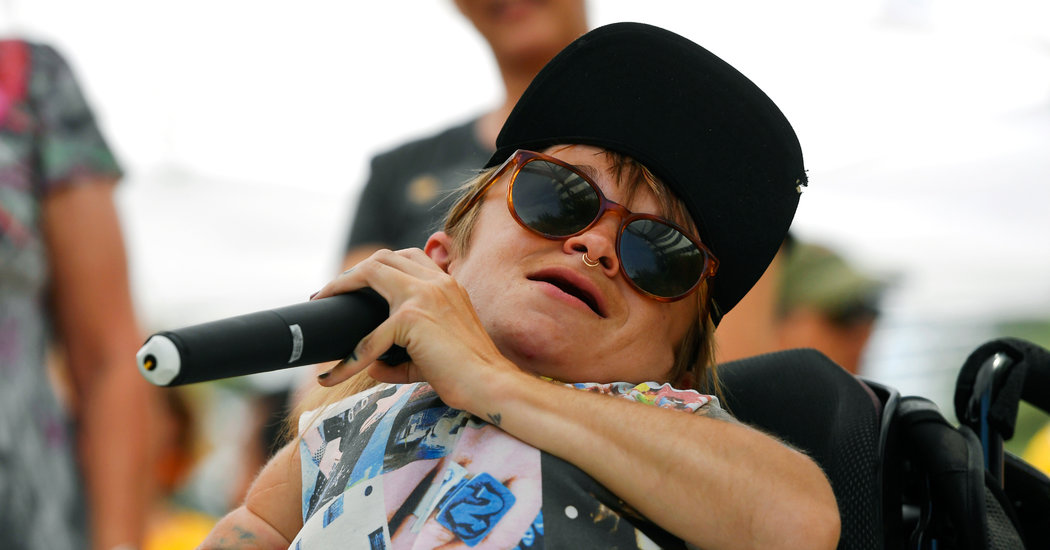 This playlist is part of a series exploring how the Americans With Disabilities Act has shaped modern life for disabled people. Share your stories or email us at ada@nytimes.com.

Since 2007, Krip-Hop Nation has been releasing mixtapes that showcase a worldwide network of hip-hop artists with disabilities. Here are five songs by members of its extended family that have appeared on them over the years.

Wheelchair Sports Camp, ‘Hard Out Here for a Gimp’

On “Hard Out Here for a Gimp,” Denver’s Kalyn Heffernan drops a deft, cocksure, assonant emo rap about perceptions and medical debt over a staccato art-rap twinkle (courtesy of the keyboardist Ikey Owens of the rock band the Mars Volta). Forty-two inches tall and born with brittle bone disease, Heffernan skewers otherizing media depictions that serve to make nondisabled people feel better about themselves. “Ah ‘my cute wheelchair?’” she raps. “It costs as much your sports car.”

Prinz-D the First Deaf Rapper, ‘You Were My Everything’

The rapper Prinz-D, born Darius McCall and based in Washington, wraps a whirlwind of emotion into his lovelorn raps. “When I’m recording, I love to hear the bass and melodies a lot but I have to give that up because my hearing aids filter all the meaty portions of the beat out,” he told the music blog D.C. Music Download. “The engineers can’t turn up the beat because my aids will squeal.”

Over a metal guitar crunch, the Cleveland rapper and Nine Inch Nails fan Deacon Burns of “alternative punk hop” duo Kounterclockwise confronts police brutality in rapid-fire bursts: “Profiled by the beast, if your skin ain’t bleached be discreet or get beat.” The group stars in colorful animated music videos and released a short film in 2014, “Kounterclockwise in Forever-Land.” “Other then Joe Swanson on ‘Family Guy’ you rarely get to see a kick-ass wheelchair character in a cartoon,” Burns said in a 2014 interview, “so the fact that I go to another dimension and start a revolution and defeat a might[y] ruler all in a wheelchair is pretty dope.”

The musician, activist, consultant, public speaker and Krip-Hop co-founder Keith “Fezo da Mad One” Jones made deeply funky ’90s-flecked boom-bap on a series of CDs. Born with cerebral palsy, Fezo uses his toes to make beats. On “Alter Ego” he raps that blessings “keep my feet on the right path and MP drum pads.”

King Kaution, ‘How I Feel’

King Caution, who is from Grand Rapids, Mich., “grinds hard from a wheelchair” after being paralyzed in a car crash in 2006. “How I Feel” mixes stories of his accident and recovery with hard braggadocio.

Got a DIY painting project planned? These rim covers reduce the mess.

Ugh, fine. I ‘get’ Twitch now. All it took was ‘Ghost of Tsushima’ and a pandemic.