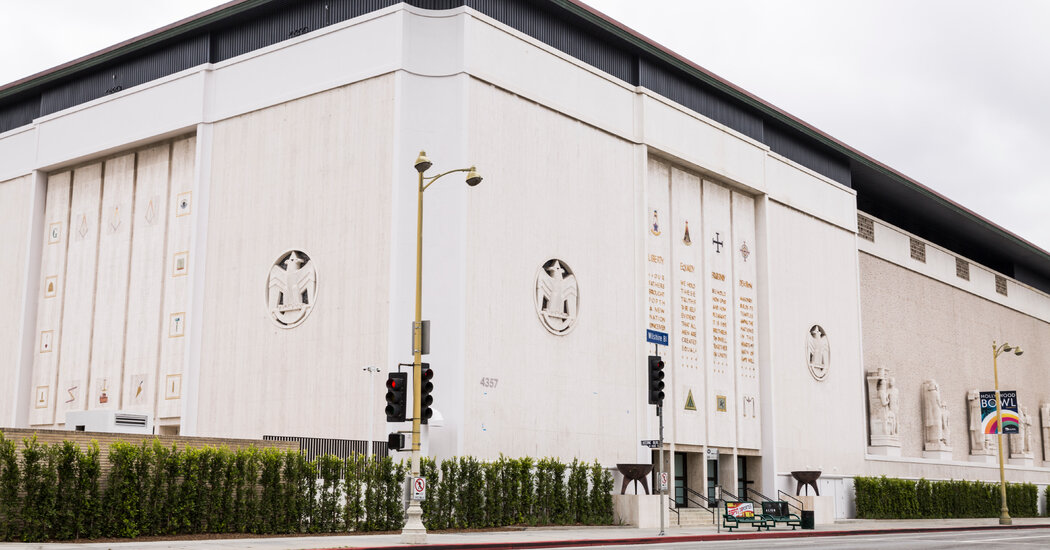 The Marciano Art Foundation in Los Angeles, which closed its doors last year in the midst of a labor dispute, has settled a lawsuit saying it broke the law by laying off 70 part-time employees, union officials said on Wednesday.

The dismissals came abruptly in November, after District Council 36 of the American Federation of State, County and Municipal Employees filed a petition with the National Labor Relations Board seeking to represent docents and visitors services employees at the privately owned museum, which was opened in 2017 by two brothers who had co-founded the Guess jeans empire.

Soon after the layoffs, a former employee filed a lawsuit in California Superior Court in Los Angeles. The complaint asked for class certification and said that the foundation and the brothers, Paul and Maurice Marciano, had violated a law that requires certain employers to provide employees and government officials at least 60 days written notice before ordering a mass layoff.

A document provided by the plaintiffs in the case said the foundation had agreed to pay just over $205,000 to the 70 former employees and $70,000 in legal fees, a portion of those accrued. Each of the former workers is expected to receive about 10 weeks of pay, said Daniel B. Rojas, one of the lawyers who represented them.

“We are confident that further litigation would have demonstrated that the Marcianos’ conduct was unlawful and motivated, at least in part, by illegal, anti-union animus,” Mr. Rojas said in a statement, adding: “The reality of our legal system is that the ultrawealthy can drag the process out to the detriment of parties with lesser means.”

A lawyer for the foundation and its owners did not immediately respond to a request for comment.

The former employee who brought the suit, Kenneth Moffitt, said that he hoped the Marciano brothers would learn “empathy for other people” but added, “I’m not convinced it’s possible.”

As part of the settlement agreement, District Council 36 dropped a charge of unfair labor practices filed with the labor board, said a union official, Lylwyn Esangga.

The foundation, which is housed inside a 90,000-square-foot former Masonic Temple on Wilshire Boulevard and whose collection includes works by Cindy Sherman, David Hammons and Damien Hirst, has been closed to the public since the dispute began.

When the employees announced their plans for a union last fall, they said they wanted to address pay conditions at the museum, where the starting wage for visitors services associates was set at the Los Angeles minimum of $14.25 an hour.

That unionization attempt was seen as part of a wave of similar efforts at institutions including the New Museum and the Guggenheim in New York, and the Frye Art Museum in Seattle.

The foundation responded initially with a statement saying it was supportive of ideas to improve the workplace and would “give this careful attention as we begin our discussions.”

Four days later, however, employees received email messages from the foundation announcing that current exhibitions would close early and adding: “We will be laying off all of the Visitors Services Associates.”

The foundation cited “low attendance the past few weeks” in those emails. But union officials called the dismissals “retaliatory” and asked the labor board to order the foundation to reinstate the employees and reopen the museum.

Some former museum employees said the layoffs and closing echoed a series of events in the 1990s when Guess fired garment workers in Los Angeles who had tried to start a union.

The company took back those workers to head off a complaint by the labor board, which was about to accuse Guess of illegally firing the workers in retaliation for their union activities, according to reporting at the time. Under the terms of a settlement the company acknowledged no wrongdoing.

Around the same time, Guess said it was moving most of its manufacturing from Southern California to Mexico and South America.

Soon after the Marciano foundation layoffs, ex-workers held demonstrations outside, demanding to be allowed back in. But the museum’s website stated: “The foundation will remain closed to the public until further notice.”

Then, in early December, the foundation said that it had no intention of reopening.

“The Marciano Art Foundation will remain closed permanently,” the foundation said in an email message to reporters, adding that its “only goal was to give back to Greater Los Angeles by fostering an appreciation of the arts accessible to everyone and free to the public.”

The Technical Stars Who Help Pull Off a Christopher Nolan Narrative

In a Book About Trauma, She Hopes to Show What Survival Looks Like

In ‘Intimations,’ Zadie Smith Applies Her Even Temper to Tumultuous Times

The South’s Fight for White Supremacy