Michelle Wolf Doesn’t Want to Be Your Folk Hero 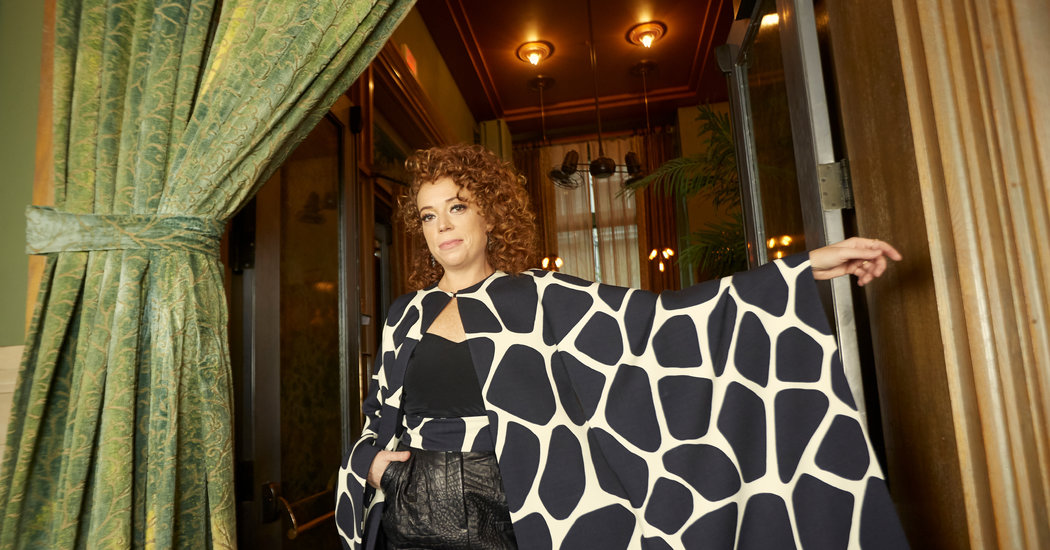 It seems like every comic has a routine that deals with outrage culture. But when Michelle Wolf addresses it, you can be sure she is speaking from experience.

She opens her new Netflix stand-up special, “Joke Show,” with an observation. “Over the past couple of years,” she says, “we’ve developed this amazing ability to get mad at anyone for any reason.”

This is Wolf’s way of setting up a joke that leads her into the unpredictable minefield of comments on her Instagram feed. But as she said in a recent interview, her lesson about a culture that has become quick to anger is also a sly acknowledgment of all the tumult that’s recently transpired in her comedy career.

It was April 2018 when Wolf, an audacious if not yet widely known performer from “Late Night With Seth Meyers” and “The Daily Show With Trevor Noah,” delivered a now-famous routine at the White House Correspondents’ Dinner.

Treating the event like a comedy roast, as past performers have, Wolf said Sarah Huckabee Sanders, the White House press secretary at the time, “burns facts, and then she uses that ash to create a perfect smoky eye,” and said of CNN, “You guys love breaking news, and you did it, you broke it.”

Some viewers found it a hilarious exercise in speaking truth to power, but there was also swift and vocal condemnation of the routine from other constituencies. Wolf was disparaged by journalists, former White House officials and President Trump himself, who wrote in a tweet that she was “filthy” and that she had “totally bombed.” And the White House Correspondents’ Association said in a statement, “Unfortunately, the entertainer’s monologue was not in the spirit of that evening.”

The next month, Netflix introduced Wolf’s weekly topical comedy series, “The Break” — only to cancel the show that summer, providing more ammunition to the comedian’s detractors.

A year and a half later, Wolf is hardly chastened by these events. “Joke Show,” which Netflix will release Dec. 10, is not a direct response to her recent brush with notoriety but it is brimming with the same fierce candor that inspired it.

In this hourlong set, which only briefly addresses the correspondents’ dinner, Wolf dives headlong into topics that she expects will inflame some viewers, including her story about having an abortion.

With her newfound visibility, Wolf wants to show people who she really is as a stand-up: not a political comedian, but one who doesn’t mind being provocative to prove that she can find the humor in almost any subject.

“I say this all the time: Don’t bring your baggage into my joke,” Wolf told me. “A comic’s job isn’t to be right or wrong. They’re just supposed to be funny.”

On an afternoon in early November, Wolf, 34, was in Manhattan’s West Village, enjoying a breather from a barrage of stand-up dates that have lately taken her from Rochester, N.Y., to Sacramento, Calif.

She has only been working as a comedian for about a decade after leaving a career in finance. As in her act, the authentic Wolf has a wryness to her, but she also allows herself to take genuine pleasure in things. She said she enjoyed traveling widely and challenging the preconceptions of her audiences, whatever their political persuasions.

“It’s been making comedy really fun to do that,” she said with no evident sarcasm. “People have such strong beliefs, and you’re like, ‘All right, but — .’ That tension is perfect for comedy.”

If her scorched-earth approach to the correspondents’ dinner irritated so many of its attendees, Wolf wondered why she had been asked to address them in the first place.

“What did they think I was going to do?” she said. “I genuinely think they were like, ‘We’ll hire a woman, there’s no way this can go terribly — she’ll be soft.’ And I’m like, ‘Oh, you hired the wrong woman.’”

Looking back on that set, Wolf said she had only one regret — “I would maybe go harder” — and felt that the firestorm of reaction had given her a new boldness. “It’s made me a lot less scared of opinions,” she said. “A lot of people hate me, and I’m alive. It’s fine.”

But she also said the controversy took some of her focus off “The Break,” a mix of stand-up and sketches, and that the show had suffered as a result. “It wasn’t the right time,” she said. “I don’t think I had a clear enough idea of what I really wanted to do.”

Wolf said she sensed early on in the 10-episode run of her show that Netflix wouldn’t extend its order. “After the first two,” she said, “I was pretty sure they weren’t going to give us more, because we didn’t get any sort of pop.”

Still, the abrupt cancellation of “The Break” generated headlines — some of them arriving before Wolf could share the announcement with staff members — and seemed to leave the impression that Netflix was siding with critics of her correspondents’ dinner performance.

“It really gave people a lot of ammunition to be like, ‘Look at you, you’ll never work again,’” Wolf said. Even so, she said the end of the series was hardly a death sentence for her career. “A lot of great people have had shows canceled,” she said. “But also, so what? Now I just go back to doing stand-up? My favorite thing in the world? Too bad.”

Netflix declined to respond to Wolf’s comments on “The Break,” but Robbie Praw, the streaming service’s director of original stand-up comedy programming, said that he and his colleagues were committed to “making sure that our stand-up slate has the world’s most important voices and the world’s funniest people.” Wolf, he said, is “both of those things.”

He continued, “It’s not enough for her to be the funniest person in the room. It’s also important to her that every premise within that set is unbelievably unique. And then when it comes to putting a special together, you can be sure that every inch of material that she uses, she’s workshopped over 100 times. Every word, every inflection.”

Jared Freid, a friend and fellow comic who often opens for Wolf, said he had seen her become more energized and focused since she resumed touring.

Invoking Wolf’s passions for track and field and distance running, Freid said, “Michelle’s an athlete. I feel like that became motivating for her.”

Sam Morril, a stand-up comic who has known Wolf since the start of her career, said that Netflix had mistreated her in its handling of “The Break” and the show’s cancellation.

“She didn’t want to make a political show, and after the correspondents’ dinner, they completely kneecapped her with that,” said Morril, who did not work on the show.

Wolf, he said, has never been interested in being reaffirmed by any group that already shares her viewpoints and would much rather venture into unknown territory to win over skeptics.

“She’s become a folk hero to Burlington, Vt., and Portland, Ore., but she doesn’t want to be told that you’re my hero,” Morril said. “She wants to hear, ‘You’re so funny.’”

Wolf said she also wanted to feel that she could talk onstage about any of her opinions or experiences, no matter how potentially polarizing. That includes her abortion. In “Joke Show,” she says she believes women “should be able to get an abortion for any reason you want” and recounts how simple and uneventful the experience was for her.

As she says in the bit, “I left work. I got an abortion. I drank half a LaCroix and then I went back to work. Not a big deal and I also think a pretty good advertisement for LaCroix.”

Wolf told me that “as someone who is very, very much pro-choice,” she would have been a hypocrite if she hadn’t addressed this in her act.

She added that by sharing her own story, she hoped to make it easier for other women to do the same. “Women try to be very stoic and strong about it,” she said, “when we should talk about it and be very open, because it’s such a big part of life.”

Freid, who toured with Wolf as she worked on the set for “Joke Show,” said her abortion material was not recklessly provocative. “Whether you agree or disagree with anything she says, that bit was created with care while checking, in every part of the country, that it’ll get laughs,” he said.

And then, just at that moment in “Joke Show” when viewers might feel certain they have a handle on Wolf’s perspectives, she veers off into a routine in which she states that men are inherently stronger and faster than women, and how she expects to catch flak for saying this.

Wolf told me, “I think trying to make it seem like women are the same as men takes away from women. Stop trying to compare the two.” After a short pause, she chuckled and added, “Also, it’s just fun to make people a little mad.”

She can cite statistics that she says prove her point about the athletic superiority of men. Whether you accept her premise, it would seem a strange symptom of modern life that a comedian’s act must now be as thoroughly sourced and footnoted as a Wikipedia page.

Wolf said she actually enjoyed fact-checking her routine, awaiting the inevitable pushback from her audience and “arguing it like a legal case.”

“It’s fun to do, but I also make sure I have the logic and the facts to back me up,” she said. “Where you’re like, ‘You’re wrong about that’ and I’m like, ‘I’m actually very right.’ You might feel a certain way but I’m still correct.”

Not every routine has to be a political treatise or a term paper — it can also be an expression of pure silliness, and Wolf said she would like to get back to more of this type of comedy. “There’s plenty of jokes that are absurd and crazy and aren’t in the real world, and those are also really fun too,” she said.

“Hopefully I’ll get more and more confident and not feel like I need to back up all my jokes like that,” she said. “Just sometimes say something ridiculous and be like, well, if I’m wrong, I’m wrong.”

Silicon Valley: The series finale splits the difference between the show's beginnings and what it eventually became. - Slate

‘The Ferrante Effect’: In Italy, Women Writers Are Ascendant

‘The Ferrante Effect’: In Italy, Women Writers Are Ascendant

‘By the people, for the people’: Mi’kmaw brand fuses tradition with fashion

‘I Lost My Body’ is the Netflix Oscar nominee you likely haven’t seen, but need to

Audrey Withers: The editor who led Vogue through the war