New in Paperback: ‘Speaking American’ and ‘The Seine’ 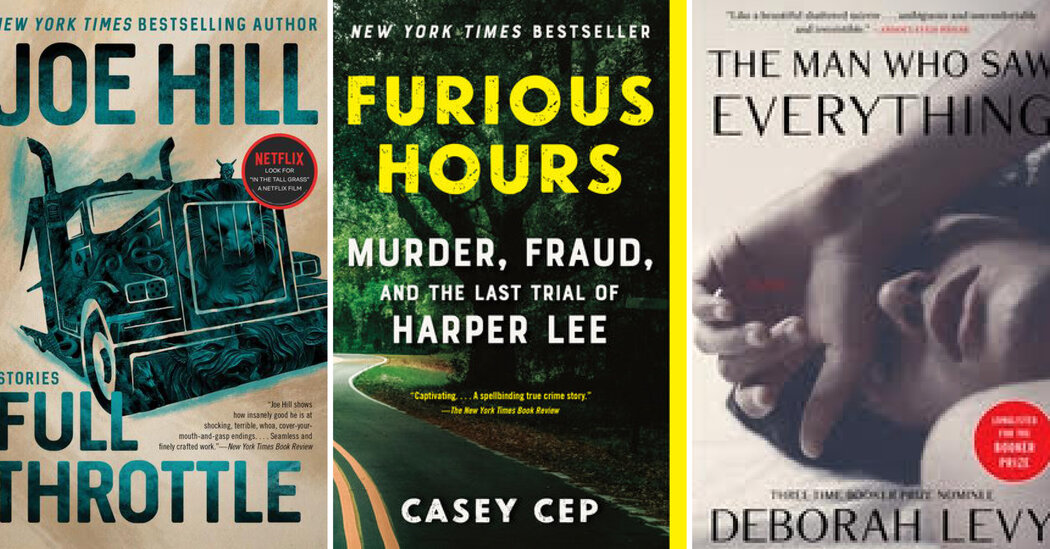 FULL THROTTLE: Stories, by Joe Hill. (Morrow, 496 pp., $18.99.) In these scary stories, two of which the author wrote with his father, Stephen King, “the gruesome skin of horror” — as our reviewer, Charles Yu, put it — “wraps around a darker psychological root: the horrors of everyday life.”

FURIOUS HOURS: Murder, Fraud, and the Last Trial of Harper Lee, by Casey Cep. (Vintage, 352 pp., $16.95.) More than a decade after “To Kill a Mockingbird” was published, Lee began research on an Alabama preacher who got away with murdering and collecting life insurance on multiple wives and relatives. Picking up the true-crime story where Lee left off, as an excuse to study Lee’s ultimate silence, Cep “lays bare the inner life of a woman who had a world-class gift for hiding,” our reviewer, Michael Lewis, wrote.

SPEAKING AMERICAN: How Y’all, Youse, and You Guys Talk: A Visual Guide, by Josh Katz. (Mariner, 224 pp., $17.99.) This map-filled survey of American regional dialects, by a Times graphics editor, is a spinoff of the popular quiz he developed for The Upshot in 2013 after collecting data from more than 350,000 people across the country.

THE SEINE: The River That Made Paris, by Elaine Sciolino. (Norton, 400 pp., $17.95.) Our reviewer, Edmund White, called Sciolino — a former Paris bureau chief for The Times — “a graceful and companionable writer, someone who speaks about France in the most enjoyably American way,” “gently informing even as she entertains.” White pronounced her book another “beautiful and amusing wreath” laid “on the altar of the City of Light.”

SELF-PORTRAIT IN BLACK AND WHITE: Family, Fatherhood, and Rethinking Race, by Thomas Chatterton Williams. (Norton, 208 pp., $15.95.) The son of a Black father and a white mother, Williams grew up identifying as Black, per his father’s wishes; but since his marriage to a white woman and the birth of their children, he has eschewed race categories. Our reviewer, Andrew Solomon, lauded Williams for reaching “both ways across the aisle of racism” and theorizing “the temperate peace” of which we’re all “sorely in need.”

THE MAN WHO SAW EVERYTHING, by Deborah Levy. (Bloomsbury, 208 pp., $16.) One of the “noirish” marvels of Levy’s third Booker Prize nominee, the Times critic Parul Sehgal noted, is the idea that her hero’s strange visions, after he is hit by a car, produce “unwanted knowledge” he needs to “confront.”

The Ballet Photo-Sharing Scandal Enters a New Phase in Court

How to Start Making Collages

11 New Books We Recommend This Week