New in Paperback: ‘The Topeka School’ and ‘Brown White Black’ 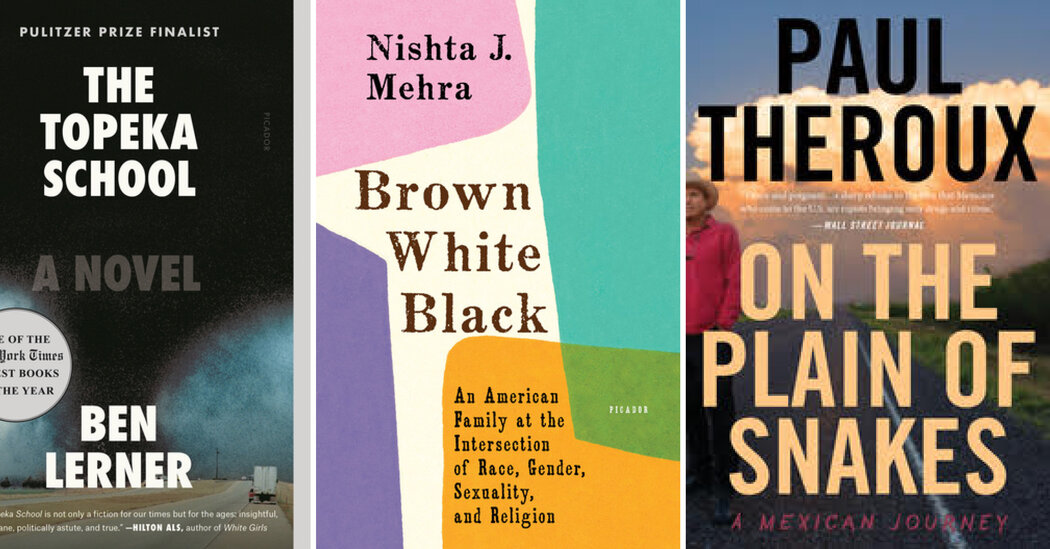 THE ESCAPE ARTIST: A Memoir, by Helen Fremont. (Gallery, 352 pp., $16.99.) Fremont’s previous memoir, revealing that her parents were Jewish rather than Catholic, led her father, who has since died, to update his will and declare her dead. He “metaphorically killed her for it,” our reviewer, Alexandra Styron, reasoned. What’s a writer to do but write another memoir to “understand why”?

THE TOPEKA SCHOOL, by Ben Lerner. (Picador, 304 pp., $17.) One of the Book Review’s 10 Best Books of 2019 and a Pulitzer Prize finalist, Lerner’s third novel again features Adam Gordon, the protagonist of his first, here a high school senior seen through the eyes of his psychologist parents and a former preschool classmate with cognitive deficits. Our reviewer, Garth Risk Hallberg, deemed it “a high-water mark in recent American fiction.”

BROWN WHITE BLACK: An American Family at the Intersection of Race, Gender, Sexuality, and Religion, by Nishta J. Mehra. (Picador, 240 pp., $17.) These essays, covering topics such as growing up Indian amid the black/white dynamic of Memphis, the death of the author’s father, her early relationship with her wife and the adoption of her son, “mine deep and distinct emotional terrain” in prose that’s “clear and heartfelt,” our reviewer, Camille Acker, observed.

A DOOR IN THE EARTH, by Amy Waldman. (Back Bay, 400 pp., $16.99.) “Few contemporary authors have shown so expertly that well-intentioned intervention can be the most dangerous kind of all,” our reviewer, Lara Feigel, wrote of this novel by a former Times South Asia bureau chief about America’s “endless war” in Afghanistan.

THE CHAIN, by Adrian McKinty. (Mulholland, 368 pp., $16.99.) The tension of this “frightening” thriller, inspired by “the era of poisonous chain letters” in 1970s Ireland, “builds whenever the mother and daughter appear,” our reviewer, Tina Jordan, noted. “Rachel’s actions,” spurred by maternal instinct, “remain completely relatable, even as she whipsaws between terror and determination, morphing from victim to perpetrator.”

ON THE PLAIN OF SNAKES: A Mexican Journey, by Paul Theroux. (Mariner, 464 pp., $17.99.) In this “sprawling” road trip that our reviewer, Monica Drake, called “an unvarnished depiction of reality,” Theroux plunges headlong into the immigration debate as he “crisscrosses” Mexico, starting with “the symbiotic communities lining each side of the United States border.”

The Incredible Influence of James A. Baker III

A ‘Smart District’ Takes Shape in the Netherlands

15 small businesses that are having great sales this Black Friday