New Looks in ‘Frozen 2’ for Sisters on an Adventure 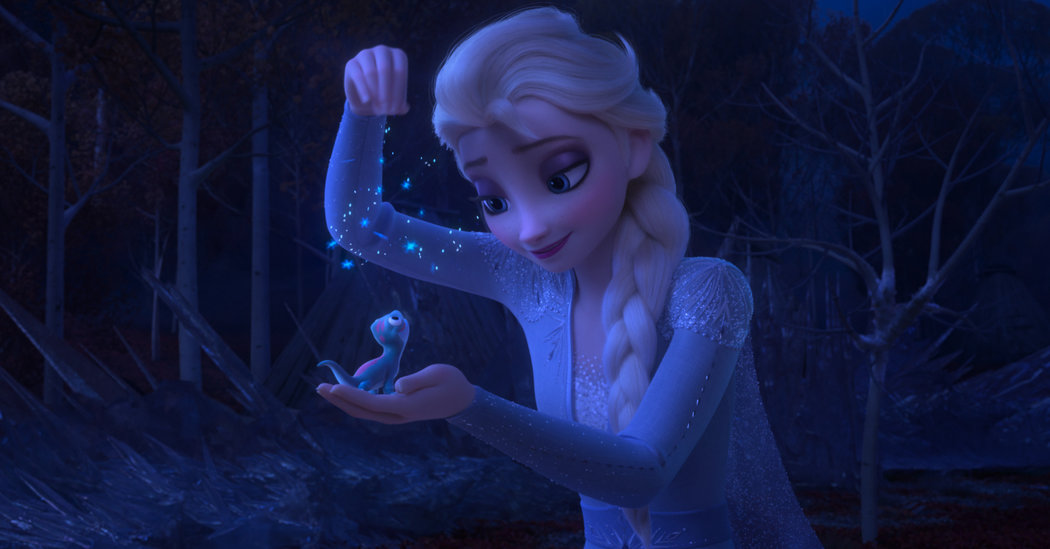 For two years, the visual development artists Griselda Sastrawinata-Lemay and Brittney Lee designed and refined the costumes for Anna and Elsa, the heroines of Disney’s “Frozen 2,” due Nov. 22. The original “Frozen” outfits have been seen by millions, in movie theaters and on Broadway, in cosplay contests and on Halloween. So there was more than a little pressure to get the new looks right. On something as seemingly simple as Anna’s travel dress and accompanying cloak, the creators went through numerous versions, working out everything from fabric colors to armhole placement. “This is actually No. 122,” Sastrawinata-Lemay said. “There are 121 iterations of it that you’ll never see.”

A fairy-tale character calls for a classic fairy-tale silhouette: A-shaped, with a bell-shaped skirt. Anna’s travel dress draws inspiration from the bunad, a Norwegian folk costume, as well as the now-classic silhouettes of Christian Dior’s “New Look” of the 1940s and ’50s. Sastrawinata-Lemay spent days on the smallest of details, like the decorative embroidery and tiny loops of the cuffs and the delicate buttons running up the back. With the state of computer-generated imagery a few years ago, “we couldn’t do any of this,” she said. “But now we can, so why not go crazy?” There are also tiny crocuses (the official symbol of Arendelle) on the buttons in the front, and miniature stalks of wheat along the hem.

For the sequel’s colder climes, Sastrawinata-Lemay created a travel cloak of rich purple wool, clasped at the collar with a gold chain of interlocking wheat-patterned links. She agonized over the scalloped hem. “The scallops are really squared off,” she said. “Every time we made them rounder, it made her look younger, but by squaring them off, she feels a little bit more mature.” For a more refined, elegant feel, she added a sawtooth edge to the fabric. “It gives line and structure,” Sastrawinata-Lemay said. “But we also just think it’s really cool!” To keep the outfit from going too somber, she made the silk lining a brilliant magenta, “so there’s a pop of color whenever she moves.”

“Frozen 2” takes the sisters through woods and water, which means that Anna, at least, needs a travel bag, hopefully something durable. Both functional and stylish, Anna’s satchel is based on a traditional Norwegian bag constructed of small, interwoven strips of birch bark. “The pattern on it is the one you see on Kristoff’s sash,” Sastrawinata-Lemay said, referring to the likable ice harvester who shares a kiss with Anna in the first film. A Norwegian satchel in their reference materials caught her eye. Sastrawinata-Lemay said, “I loved the texture. Anna is very textural and very earthy, so it just fits.”

Elsa is the queen, so her travel dress has to communicate her exalted position. In many ways, it also functions as a uniform, with military-style epaulets. Adorned with snowflakes, the pale blue dress is set off by a flowing cape split in two in the back. “We got a little pushback from the directors, who were skeptical about how it might perform,” said Lee, but her husband, David Suroviec, a character technical director on the film, vouched for it. Onscreen, the halves of the cape look like wings. “We wanted something that would play in the wind, because fall wind was going to be a big element in the movie,” Lee said.

Lee has loved illusion necklines — often a strapless look that involves sheer fabric — ever since she saw the actress Mandy Moore sport one on the red carpet at the 2011 Oscars. “It was just stunning,” she recalled. Lee designed one for Elsa in the first movie that went unused; in “Frozen 2,” she finally got her wish. This one is fairly straight and cuts across her clavicle. “It’s a very sheer tulle,” Lee said, “but then layers of sequins and other beaded materials cascade down so it creates this seamless gradient up her body.” To Lee, the look of an illusion neckline is magical, and it seemed perfect for Elsa, a magical figure herself: “She makes her own clothes out of ice, so that was a no-brainer for me.”

With Elsa’s raised hemline and travels across various terrains, “boots seemed the obvious direction to go,” Lee said. And not just any boots: ice boots with shimmering snowflake patterns from top to toe. She looked at all sorts of inspirations, including a thigh-high, jewel-encrusted pair from Alexander McQueen. “It seemed like almost the entire leg of this model was covered in crystals,” she said. “I thought if anyone deserves to wear something like that, it’s Elsa.” The heel is solid ice (like her snow queen shoes in the first film), but the rest of the boot bends and moves like suede. Lee wanted to give Elsa a look and feeling of strength, but added, “The first question we ask whenever we’re designing something is, ‘Would I really want to wear this?’” Lee said. “And yes, I would wear ice boots. Or I would try, at least.”

Anna, Elsa and the Costume Designers Who Create Their Looks

Anna, Elsa and the Costume Designers Who Create Their Looks

Why the Oscars, Emmys and Tonys Are Not Ready for They and Them

‘Star Trek: Picard’ Recap: Out in the Cold