On ‘Smile,’ Katy Perry Finds Purpose (and Pitfalls) in the Past 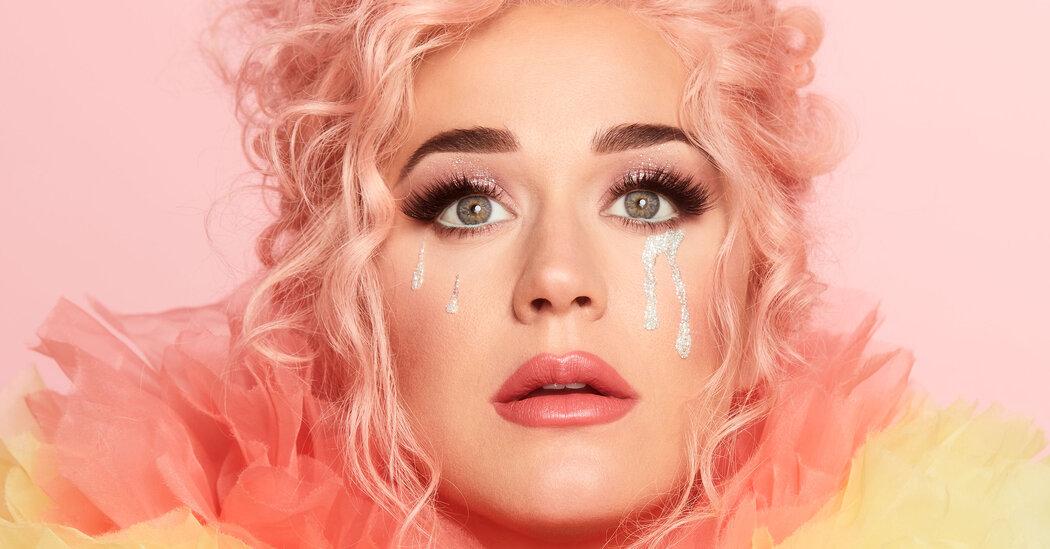 It is either auspicious, or unfortunate, that Katy Perry is releasing her sixth album, “Smile,” the same week that her titanically successful 2010 record “Teenage Dream” is celebrating its 10th birthday.

On the one hand, the anniversary reminiscences have been especially rosy; who right now is not nostalgic for what their life sounded like 10 years (let alone 10 months) ago? But reflecting on the staggering commercial success of that eight-times-platinum record puts into stark focus just how far, in the last several years, Perry has strayed from the gravitational center of American pop music.

“Teenage Dream” spawned a record-tying five No. 1 singles; the only other album to achieve such a mass-cultural feat was Michael Jackson’s “Bad.” By contrast, of the last five singles Perry, 35, has released — all in the yearlong, spaghetti-against-the-wall lead-up to “Smile” — none exceeded No. 40 on the Billboard chart. Three of them failed to crack the Hot 100 at all.

Most of Perry’s biggest hits, and four of the five No. 1 songs on “Teenage Dream,” were collaborations with the star producers Max Martin and Dr. Luke, who, by the mid-aughts, had boiled pop hitmaking down to a science. (Or maybe an arithmetic: Martin has famously referred to songwriting as “melodic math.”) But science and math don’t sell concert tickets or magazine covers, so the ebullient personality and quirky co-written lyrics Perry, a daughter of Pentecostal ministers gone saucily secular, brought to these songs was crucial. She was the fluttering heart inside the algorithm — wacky, seductive and full of fallible humanity.

But hitmaking has become less predictable. In the age of TikTok virality and stan-army-uniting super-duets — the era of “Old Town Road” and “WAP” — the code that producers like Dr. Luke and Martin once cracked no longer guarantees entry. Working with Dr. Luke, too, has now become a professional liability in the wake of his bitter legal battle with his former artist Kesha.

Earlier this summer, Perry released the cover art for “Smile,” which shows her frowning cartoonishly in a harlequin collar and clown nose. Certain corners of the internet reacted as though she had shown up to a funeral in Daisy Dukes and a bikini top. “Smile?! In this economy?!” Much like her bloated 2017 album “Witness,” which promised but could not quite deliver the fuzzily defined commodity she called “purposeful pop,” Perry was once again accused of being out of step with the times — the Left Shark in pop culture’s otherwise precisely choreographed Super Bowl Halftime Show.

But, at least this time around, such kneejerk criticism was too harsh. “Smile” doesn’t have much of an agenda beyond a general feeling of uplift, and it has a lightness that makes it a better and more nimble record than its predecessor. All I’m asking of a Katy Perry song is for it to make me feel marginally happier than I did three and a half minutes prior. There are a handful of songs on “Smile” that do the trick.

Though the singles have flopped, “Smile” provides an excuse to revisit them — most are better than they got credit for. The crystalline Zedd production “Never Really Over” is a propulsive opener, and the bouncy, wedding funk of the title track harkens back to “Birthday,” one of the best songs off Perry’s 2013 album “Prism.”

“Smile” often feels like it is testing out a few different concepts as to what Perry’s music might sound like in the future, once she’s accepted that she is no longer chasing world-dominating hits. The sweet, twangy closer “What Makes a Woman” provides one possibility, while the appealing, guitar-driven beach pop of “Tucked” offers a more familiar one.

At its low points, though, “Smile” still feels tethered to the cold, steely, semi-desperately radio-chasing aesthetic of “Witness.” The try-hard anthem “Not the End of the World” shuffles through several different expensively cleared hooks (an interpolation of “Na Na Hey Hey Kiss Him Goodbye,” a years-late nod to Drake’s “What a Time to Be Alive”), but none of them click. There are also two (consecutive!) songs about the well-worn pop tableau of crying on the dance floor, and while one (“Teary Eyes”) is better than the other (“Cry About It Later”), zero would have also sufficed. “Harleys in Hawaii” and “Champagne Problems” fail to make being rich, famous and in love sound particularly relatable, or interesting.

The most surprising strength of “Smile,” though, is the way it circles back to the earliest days of Perry’s recording career. Years before she became Katy Perry, the 16-year-old Katy Hudson released an angsty but ecstatic Christian-rock record — think mid-90s Alanis, had she been addressing her songs to Christ instead of Dave Coulier. While “Smile” lacks that alt-rock edge, its most deeply felt material has a familiar devotional quality about it. “I am resilient, born to be brilliant,” she sings with soulful conviction on “Resilient,” a reunion with her “Firework” producers Stargate. On the title track, she posits that “rejection can be God’s protection.”

Most striking, though, is the Amy Grant-style gospel pop of the penultimate track, “Only Love.” Atop openhearted keyboard chords, Perry, a new mother, extends an olive branch to her parents: “If I had nothing to lose, I’d call my mother and tell her I’m sorry,” she sings. “I’d pour my heart and soul into a letter and send it to my dad.”

Their version of faith may look different from hers, but Perry sounds like she has not given up searching for a force greater than herself. In these moments, however fleeting, she seems at last to have figured out what “purposeful pop” actually means to her.

Barbra Streisand, Patti LaBelle and Dolly Parton on Their Most Memorable Performances

A Novel That Unfolds in a Day, and Other Historical Fiction

After Delay, Ticket Holders Are Getting Refunds for Two Concerts