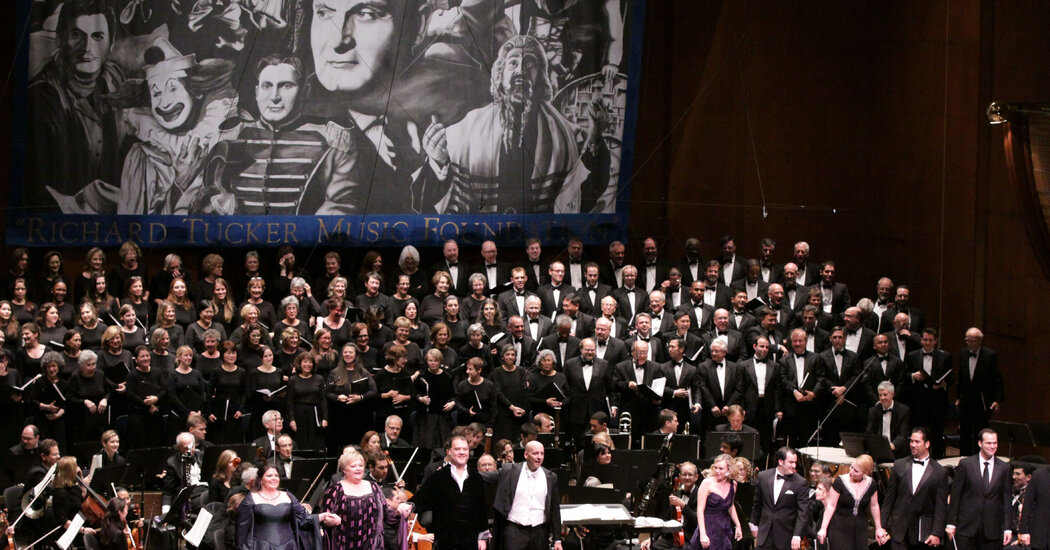 The Richard Tucker Music Foundation, which grants prestigious awards to young singers, removed David N. Tucker from its board of directors on Monday evening. Mr. Tucker, a son of the distinguished tenor for whom the foundation is named, was removed after an uproar over racially charged comments that he made on a Black singer’s Facebook page.

“The Richard Tucker Music Foundation condemns the hurtful and offensive comments made by one of our board members, David Tucker,” Jeffrey Manocherian, the foundation’s chairman, and Barry Tucker, its president and another of Richard Tucker’s sons, said in a statement.

On Saturday, Julia Bullock, a Black soprano, shared a Washington Post story on her Facebook page that quoted protesters in Portland, Ore., who said they had been detained by federal officers in unmarked vans. In response, Mr. Tucker commented, “Good. Get rid of these thugs and I don’t care where you send them. They are a Pox on our society.”

In another comment, he wrote, “About time someone tough will try to crush the mob before they destroy and kill more innocent people. Bravo to Trump to send in Federal troops.”

When Russell Thomas, a Black tenor, replied in a comment that the Tucker Foundation had given its top prize, the Richard Tucker Award, to only one Black artist since it was first granted in 1978, Mr. Tucker wrote that “pulling the race card is another convenient excuse to modify excellent standards of vocal artistry.”

A spokeswoman for the foundation said on Monday that while there had been a single Black winner of the Tucker Award — Lawrence Brownlee, in 2006 — the foundation had awarded a dozen smaller career and study grants to Black artists over the past decade.

Mr. Brownlee called Mr. Tucker’s comments “racist” and “deeply disappointing” in a Facebook post on Monday. He said that while he was the only Black artist to have received the prize, there were many other Black singers whose talent would have made them worthy recipients.

The Black Opera Alliance, an organization founded last month that aims to expose racial inequity in opera, wrote an open letter to the foundation’s board on Sunday calling for Mr. Tucker’s removal.

“We are deeply disturbed,” Derrell Acon, the founder of the group and the director of engagement and equity at Long Beach Opera in California, wrote in the letter, to which other members of the group also contributed. “It is impossible for someone who holds these views to contribute productively to any organization that seeks to cultivate a culture of respect, equity and justice.”

The group called for the foundation to publicly condemn Mr. Tucker’s comments, to do more to combat potential racial bias in its leadership and to embrace Black performers.

Since the letter was published, several past winners of the foundation’s top prize also condemned Mr. Tucker’s comments and called for his removal.

Last year’s winner, the soprano Lisette Oropesa, tweeted on Sunday evening that Mr. Tucker’s comments were “disappointing” and “racist.” The mezzo-soprano Joyce DiDonato, who won the 2002 prize and currently serves on the foundation’s board, tweeted on Monday that she had told the foundation that she could not continue to serve unless it removed Mr. Tucker.

The mezzo Stephanie Blythe, who won the award in 1999, wrote on Facebook on Monday that she was “horrified” by Mr. Tucker’s comments, and also called for his removal. “These statements were not some spur of the moment, off the cuff comments,” she wrote. “They were full of indoctrinated hate.”

Mr. Acon said in an interview that his goal in forming the Black Opera Alliance was to empower Black singers and administrators to speak out against injustice in the industry. “We don’t want to allow the system to just absorb injustice and for it to become yesterday’s news,” he said. “We want to put companies and institutions to task and make sure they respond in an equitable way.”

Mr. Tucker’s removal comes amid a broader reckoning in the opera world over the lack of diversity in classical music. A New York Times story published last week revealed that the Metropolitan Opera has only three Black managing directors on its 45-member board, and just two Black members of its 90-person orchestra. The Met has not presented an opera by a Black composer in its 137-year history.

Peter Carwell, the Tucker Foundation’s executive director, said in an interview on Monday evening that the foundation is assembling a diversity task force. “We’ve discussed these issues in the past,” Mr. Carwell said. “And now we feel the need to not only discuss, but prioritize them.”