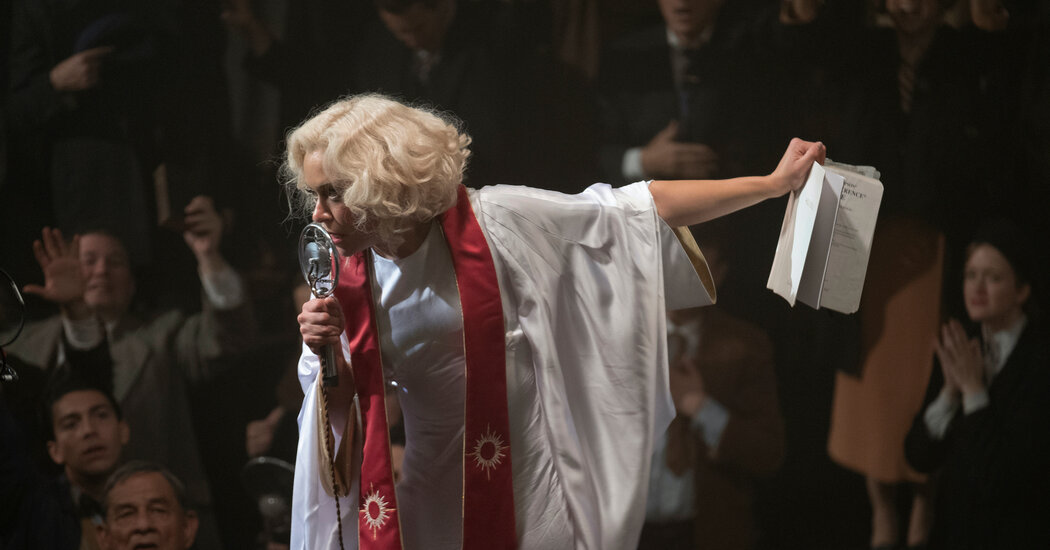 It begins with the death of a lawyer and ends with the anointing of a new one. In between, this episode of “Perry Mason” covers a good deal of ground with nearly all of its characters, from the fed-up Black cop, Paul Drake, to the true-believer evangelist, Sister Alice, to the dogged legal secretary, Della Street, to the title character. It’s the hour when “Perry Mason” stops being an origin story and starts becoming the first proper Perry Mason case.

In that regard, the episode’s approach is refreshingly simple and unlabored. After the death by suicide of E.B. Jonathan — duly covered up by Della and Perry in order to make it look as if he died of natural causes, thus preserving both his reputation and his life insurance payout — the falsely accused Emily Dodson is in need of new representation. But no one in town, not even E.B.’s former partner Lyle (Mark Harelik), will touch the case for love or money. The cold reception to Della’s entreaties mirrors that of E.B.’s son (played by the actor John Lithgow’s real-life son, Ian Lithgow), who dutifully entombs his father in the family mausoleum but refuses to mince words about his absentee father’s lack of devotion to his kin.

But as another great fictional detective, Sherlock Holmes, often said, “When you have eliminated the impossible, whatever remains, however improbable, must be the truth.” And the truth of the matter is this: No one is more committed to Emily Dodson’s defense than Perry Mason. You can all but see the thought form in Della’s mind as Perry rants and raves about Emily’s innocence and the bogus legal system that’s railroading her (sample quote: “If you walk out of that door and you think for one second that you are entering into a nation of laws, you are a complete [expletive] idiot”): Perhaps the right representation was right in front of them all along.

So Della does what any enterprising legal secretary might do, hewing to Perry’s mantra, “There’s what’s legal, and there’s what’s right.” She forges E.B.’s signature on a document attesting that E.B. was mentoring Perry. Then she secures the help of a deputy district attorney who is out to unseat the ambitious D.A. Maynard Barnes, who helps Perry cheat his way through the bar exam and become a defense attorney practically overnight.

“So help me God,” Perry repeats in his sacred oath to uphold the law and his duty to it; you just know he sees it as a calling that transcends the letter of the law and hews to its spirit instead.

In this respect he’s not all that far removed from Sister Alice, the woman to whom Emily, who’s now out on bail, clings as a refuge from the knowledge that the man with whom she was having an affair is at least partially responsible for the death of her child. Against the advice of her mother, Birdy, and the outcry led by her former backer, Elder Brown (David Wilson Barnes), she has decided to revive her outmoded practice of faith healing as a sort of warm-up to resurrecting little Charlie Dodson, a miracle she feels has been vouchsafed to her by God Himself.

It’s fascinating to watch the actor, Tatiana Maslany, play Sister Alice as straight as she can. There’s something very earthy and human about her character’s approach to the work she does: Unlike the typical bible-thumping TV evangelist, she all but shames a crippled congregant into rising up from his wheelchair and walking (with a lot of help from other believers) at her behest. She shares Perry’s adamant belief in Emily’s innocence — she simply relies on the Lord, not the law, to make things right.

I wonder where Paul Drake fits into the damn-the-torpedoes, full-speed-ahead approach to justice embraced by both Perry and Sister Alice. Perry is buoyed by evidence, including his partner Pete Strickland’s discovery that the killer cop Sgt. Ennis has been bribing, bullying, and shortcutting his way to the forefront of every investigation related to the Dodson case. Alice has her unflappable faith that God is speaking to her. Drake has something even more existential: his state of Blackness, which gives the white police free rein to run him and his wife and friends off a beach for no good reason other than racism. It’s this same culture of white supremacy that forced him to fudge his report on the Dodson kidnappers’ murder scene at Sgt. Ennis and Detective Holcomb’s behest.

One gets the sense from his bedtime conversation with his wife, Clara, that his tolerance for standing around and taking this kind of abuse from his white colleagues has been all but exhausted. If so, he could become a key player in the Dodson affair.

But I think the thing I’m most impressed by in this episode is the rapidity with which Perry makes the leap from private dick to attorney-at-law. There’s no prolonged, multi-episode arc. There’s not even a “Rocky”-style training montage. One minute he’s being introduced by Stella to the deputy district attorney who will coach him through the bar exam; the next minute he’s swearing his oath as an officer of the court.

And for Perry, the stakes are personal as well as legal. In this episode he pays a visit to his ex-wife, Linda — played by Gretchen Mol, an alumnus of “Boardwalk Empire” like her castmate Shea Whigham, and a sign of just how deep a bench of actors “Perry Mason” has. She is justifiably skeptical of his overtures to her and their son.

Will that change when he becomes something other than, to borrow Della’s words, a cynical and slothful private eye? Will the Dodson case mark a new beginning — provided, of course, that Perry is successful in defending his very first client?

From the case files:

What’s on TV Monday: ‘Ip Man 4: The Finale’ and ‘Intervention’

Netflix’s ‘Rebecca’ can’t hold a candle to its predecessor

Paul Fusco, Photographer on a Funeral Train, Dies at 89