‘Radioactive’ Review: Marie Curie and the Science of Autonomy 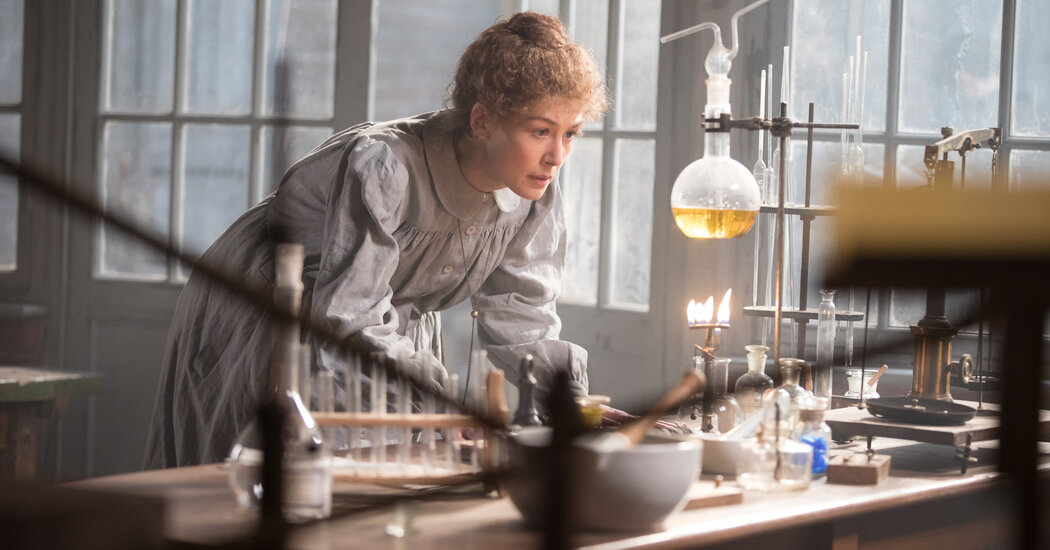 “Radioactive,” a thoughtful, very watchable fictionalized portrait of Marie Curie, tries hard to nudge the halo off its subject. Given her endeavors and accolades — including two Nobel Prizes — this simple, humanizing effort proves tough but also feels necessary. One of the most celebrated scientists of the 20th century, Curie has long been lauded as a pioneer and is the only woman to win a Nobel twice, having first shared the prize for physics in 1903. Eight years later, she won for chemistry, defying a scandal to pick up her award and remind the world that she merited a claim on history.

“Radioactive” gives Curie her due while complicating her legacy. She and her husband, Pierre, discovered polonium and radium — she coined the word radioactivity — work which led to medical advances and the atomic bomb. In his 1903 Nobel lecture, Pierre Curie alluded to the ominous import of their findings, asking “whether mankind benefits from knowing the secrets of Nature, whether it is ready to profit from it or whether this knowledge will not be harmful for it.” (The antediluvian Nobel speaker who introduced the Curies at the 1903 ceremony referred to Marie as a help meet, citing Genesis.)

It takes a little while for “Radioactive” to find its groove. It opens with Marie — Rosamund Pike, in sunglasses and under a schmear of jowly wrinkles — collapsing and being carted off to a hospital. The mists of time quickly clear and Marie is soon in Paris in 1893, where she bumps into the flirty, goateed Pierre (Sam Riley), who marvels that she is reading about microbiology. It’s a strained meet cute, but the director Marjane Satrapi has more than romance in mind, and you’re soon racing with Marie to a showdown with some Sorbonne graybeards. This brisk pace largely continues for the rest of the movie as Marie hurtles through time, making history, trouble and babies.

Satrapi spends too much time on needless place-setting and thematic telegraphing: “I will find my own way,” Marie declaims before she buries her head in a book, the Eiffel Tower prettily framed in a window. More productive and illustrative of Satrapi’s strengths is a quick montage sequence that juxtaposes images of male colleagues shaking their heads at Marie (men, they do not like her) with visuals of Loïe Fuller (Drew Jacoby) twirling onstage (she, they like). A fascinating figure, Fuller created a popular dance called the Serpentine that she performed on a darkened stage while wearing a flowing white costume illuminated by deeply colored changing lights.

In real life, Fuller socialized with the Curies and apparently asked for some radium for a costume (they said non). One contemporary observer likened Fuller to “a ray of life,” a metaphor that finds an echo in one of Marie Curie’s descriptions of her and her husband’s night visits to their lab. “We could see their slightly luminous silhouettes,” she wrote of their discoveries, “and these gleamings, which seemed suspended in the darkness, stirred us with ever new emotion and enchantment.” Together, Fuller (with her rotations and hues) and Marie (with her seductive and dangerous luminescences) create a complicated, contradictory emblem of women in the new age.

With a script by Jack Thorne, “Radioactive” revisits Curie’s milestones and, per biopic usual, glosses over facts, going for mood and tart looks — Pike’s astringency complements Satrapi’s generally unsentimental portrayal — and what it means to be so forward-thinking that you’re out of step with your world. There’s little about Marie’s childhood, for instance, but you get a sense of her steeliness and her priorities from the way she briskly ignores gossip and coolly cares for her daughters. The eldest, Irène (played as an adult by Anya Taylor-Joy), would eventually follow her parents into the lab, later sharing a Nobel with her husband for their work with radioactive elements.

I wish that Satrapi had cut loose more boldly with her colors and hallucinatory visions. “Radioactive” is more provocative and satisfying than the average waxworks, but Satrapi’s visual strategies also point to the even more fully adventurous movie that could have been. Even so, it pulls you in and sometimes knocks you sideways, most notably with the scenes illustrating the terrors that Curie’s discoveries led to, a reminder that this isn’t just about one life but many. Bluntly effective and dialectical, these interludes reinforce one of the movie’s refrains: science is invariably political and, in the right hands, can be a force for good and, in the wrong, a weapon of evil.

If It’s Fiction, Can It Be an Invasion of Privacy?

Quibi: Why did the video app go so wrong?

‘Mulan’ Review: In Disney’s Movie, A Flower Blooms in Adversity (and Kicks Butt)