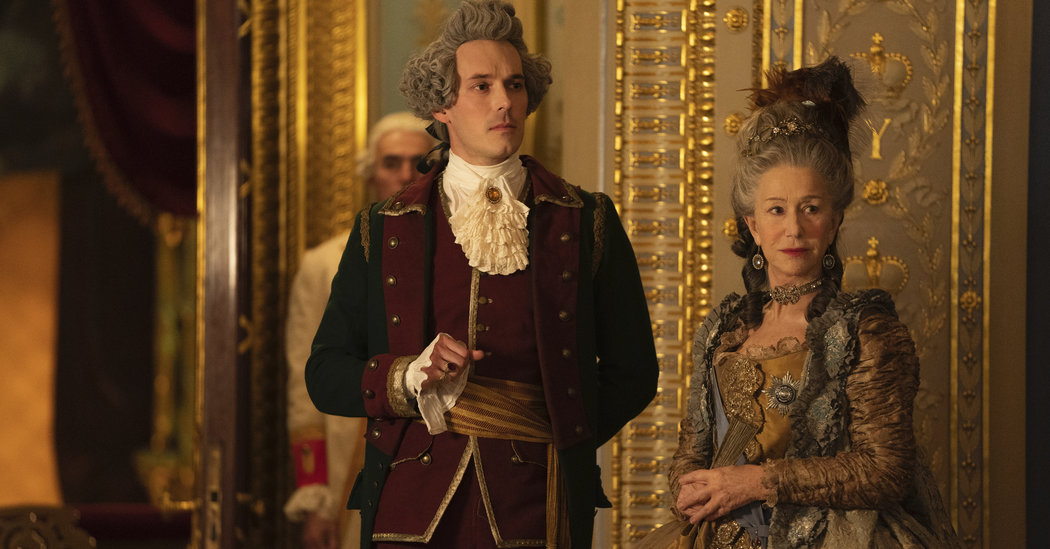 Helen Mirren won an Oscar, deservedly, for playing Elizabeth II in “The Queen” in 2007. Beginning Monday on HBO, she plays another misunderstood woman occupying a throne — though a notably less lonely one this time — in the mini-series “Catherine the Great.”

She’s brought along her extraordinary gifts of subtlety and intelligence, and there are moments throughout the series when a wicked look or stifled emotion illuminates the Russian empress. She hasn’t brought along the writer Peter Morgan or the director Stephen Frears from “The Queen,” however, and in “Catherine the Great” she’s stranded, like a Fabergé egg in an airport gift shop.

Morgan, of course, has moved on to “The Crown,” where he has seemingly endless time to tell the story of Elizabeth II. Nigel Williams and Philip Martin, the writer and director of “Catherine the Great” (Williams wrote the mini-series “Elizabeth I” for Mirren; Martin has directed seven episodes of “The Crown”), don’t have that luxury. To encompass Catherine’s 34-year reign (1762-96) in four hours, they turn it into a love story: the tempestuous tale of Catherine and the courtier and general Grigory Potemkin (Jason Clarke), two crazy kids who can’t quit each other while they’re annexing Crimea, slaughtering Turks and neglecting to free the serfs.

It’s a reasonable decision (if not entirely true to the historical record), but even with performers as capable as Mirren and Clarke, the relationship never approaches the romantic velocity it needs to carry the series. There’s a lot of yelling and passionate making up, but it’s all a little distant and slightly embarrassing, like watching a couple you don’t know arguing in a parking lot. And despite gorgeous interiors and impressive backdrops, the show as a whole doesn’t have the sweep or grandeur that would let you overlook the glibness and superficiality of the script. It plays like a dime-store “Dangerous Liaisons,” with a touch of “Amadeus” in Joseph Quinn’s twitchy performance as Catherine’s ineffectual son.

There is a feminist and revisionist aspect to the series, which intends to rescue Catherine from the more extreme fabrications about her carnality while still celebrating the sexual boldness that accompanied her (relatively) enlightened attitudes and masterly exercise of power. Like innumerable male protagonists before her, she has a strong sex drive and craving for the attention of the opposite sex, accompanied by the power to obtain them, and men compete for her favor or groom other men, younger and more beautiful, to serve as their proxies.

It’s great in concept, and it’s there onscreen in textbook fashion, but the script doesn’t do much to enliven it, to give us an authentic or visceral sense of the character’s exceptionality. “I’m not interested in debauchery,” Catherine says, adding “I’m interested in love, and honesty,” as if she’s writing an 18th-century Tinder profile. And Mirren’s performance, skillful as it is, doesn’t close the gap. There’s the occasional sharp moment to remind us of the character’s inner fires, but mostly she plays it cool and oddly small-scale, like an overly qualified schoolmistress who happens to find herself ruling an empire.

The casting of Mirren (who reportedly originated the project) achieves another reversal of typical entertainment-industry practice: At 74, she plays a character who. for most of the series. is in her 30s to 50s, a privilege usually reserved for men. She’s 24 years older than her romantic co-star, Clarke, even though Catherine was just a decade older than Potemkin. More power to her, and she’s more convincing (and seductive) than actors like Jack Nicholson and Warren Beatty have been in similar situations. Which isn’t to say that her age in the role is never a distraction, depending on what your expectations are for swoony historical epics.

Other accomplished British and Australian actors (the series was produced for the Sky network) do perfectly competent work as bewigged and slightly caricatured Russians, including Clarke as the petulant Potemkin, Rory Kinnear as the scheming foreign minister Nikita Panin, and Richard Roxburgh as the hotheaded Grigory Orlov, Catherine’s principal lover before Potemkin. Like Mirren, they’re swept along on the tide of history and big-budget costume drama.

Michelle Pfeiffer reveals she had #MeToo moment at age 20 with 'high-powered' Hollywood figure: 'I look back and cringe' - Yahoo Celebrity

Michelle Pfeiffer reveals she had #MeToo moment at age 20 with 'high-powered' Hollywood figure: 'I look back and cringe' - Yahoo Celebrity