Review: This ‘Elephant Room’ Sequel Is a Goofball Epic

by VIPortal Team
in Arts, Theater
0 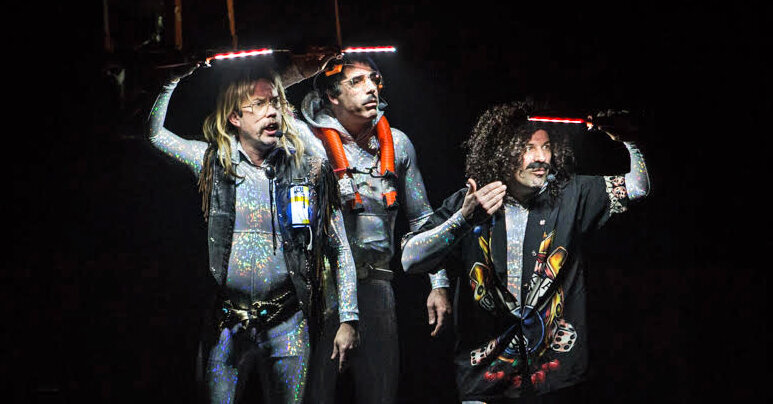 If even the mildest, most intimate play struggles to translate online, you’d think a comic interstellar adventure would be impossible to pull off. And yet.

In the goofball epic “Elephant Room: Dust From the Stars,” three endearingly dorky magicians travel from their basement rec rooms to outer space, where they end up discovering a mysterious “gathering place.” It’s “Wayne’s World” crossbred with “Spinal Tap” and “2001: A Space Odyssey,” simultaneously very funny and unexpectedly touching.

The show, part of the Fringe Festival in Philadelphia, packs a lot in just over an hour and is the most resourceful, gleefully entertaining new theater piece I have seen during the pandemic. Yes, it all happens on Zoom. Yes, there are tricks, some of them involving the audience. And yes, it’s possible to laugh alone in front of your computer.

New Yorkers might remember said magicians from their appearance at St. Ann’s Warehouse in 2012. “Elephant Room” — the new show gets a grandiose subtitle, as sequels tend to do — introduced Dennis Diamond (played by Geoff Sobelle), Daryl Hannah (Trey Lyford) and Louie Magic (Steve Cuiffo) as dorky-cool suburbanites with a fixation on sleight-of-hand and 1980s male hair stunts.

These foundational elements are still present eight years later, as the trio welcome us, their fellow illusionists, to our magic society’s monthly meeting. “I hope you have a ticket for both,” Dennis told one of the Zoom attendees, who was watching with her cat.

We went through the agenda: minutes; dues; Louie, who appeared to be in a wood-paneled basement, executing a trick with five mugs and a billiard ball, followed by one with ESP cards like those used by Bill Murray in “Ghostbusters.” The feats of mentalism elicited all-cap messages like “WHOAH” and “STOP IT” in the chat window — the Zoom equivalents of gasps.

Directed, like the earlier one, by Paul Lazar, the show deftly mixes the lo-fi aesthetics of budget science fiction (Louie’s communication device looks suspiciously like a shower attachment) with dopey humor and experimental theater’s sensibility. The last does not come as a surprise: Sobelle is a regular on arty stages, both on his own (“The Object Lesson” and “Home”) and with Lyford (“All Wear Bowlers”); Cuiffo is an actual magician who has performed verbatim re-creations of Lenny Bruce’s acts. (The sets are by Julian Crouch, whose work has been seen on Broadway and at the Metropolitan Opera.)

After Daryl recounts a nighttime encounter involving flashing lights and mysterious creatures, we switch to a galaxy where Louie “was volunteered to make first contact.” He disappears and his buddies set out “to find him in our land buggy that flies and stuff.” At this point, the show starts integrating the actors into elaborate backdrops and videos (the films are credited to Derrick Belcham and Lyford), peaking in an astonishing final scene in which the galactic travelers find themselves in a ghostly locale. It is, like what preceded, very funny, but this time the laughs may catch in your throat.

Elephant Room: Dust From the Stars
Live performances on Zoom through Sept. 26.

How Do We See Each Other in a ‘Market Society’?