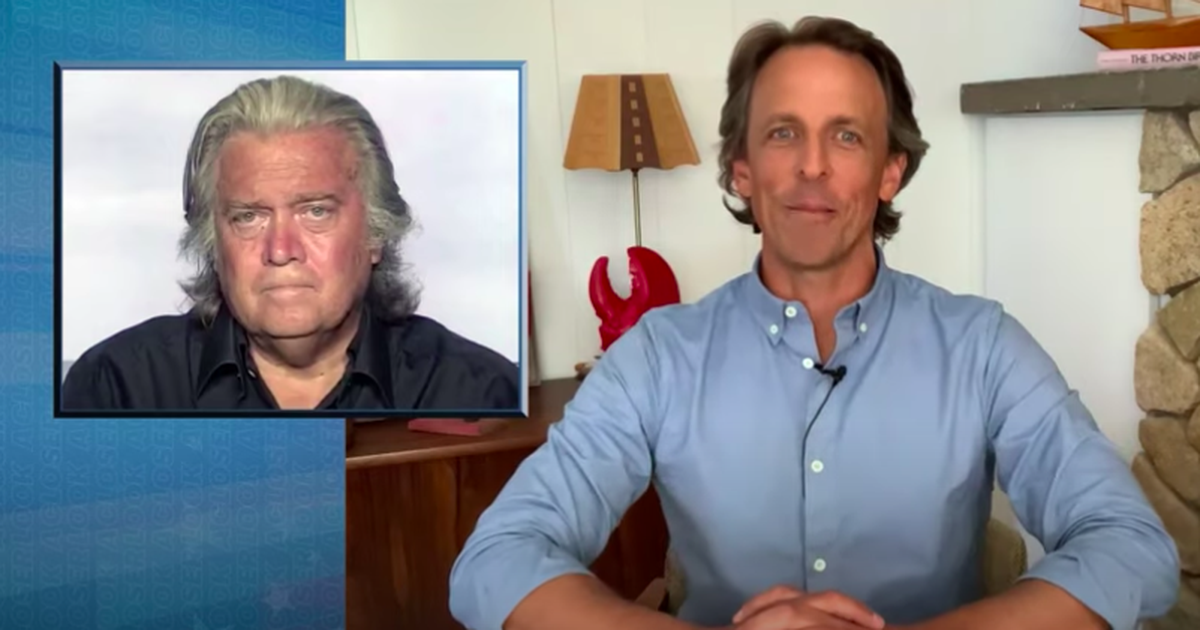 “I don’t need to tell you guys that everything’s bad and good news is very rare,” began Seth Meyers on Thursday night. “But when it does come along, why not gorge ourselves on it, even when it comes later in the day, causing you to rip up a finished Closer Look and start from scratch?”

For his last show at home before returning to the studio, Meyers and his team got to really sink their teeth into the breaking news that former Trump advisor Steve Bannon had been indicted in New York for fraud — the sixth Team Trump alumnus to face court on major criminal charges.

“It’s been a brutal six months, so I’m going to mainline some schadenfreude,” Meyers jokes. “Line that up on a mirror and give me $1 bill to snort it with. Seriously, did prosecutors know this was our last summer show in [Meyers’ in-laws’ home]? Because this is a fantastic parting gift.”

Bannon allegedly skimmed significant amounts of money — at least $1 million — for his personal use from the non-profit We Build The Wall, which raised $25 million in funds from supporters of Donald Trump’s planned border wall with Mexico in order to build portions of the structure on private land. A sunburned, characteristically disheveled Bannon was arrested on a yacht in Connecticut by law enforcement, including from the U.S. Postal Service, and was arraigned in New York City on Thursday.

“The details of this arrest are just absolutely incredible — every little tidbit is better than the last,” crowed Meyers. “For example, according to CNN, Bannon was arrested on a boat Thursday off the eastern coast of Connecticut by federal agents along with officials from the United States Postal Inspection Service. He got arrested on a boat, by the Postal Service. The Postal Service has a Navy! Please tell me it’s just a mail truck with a giant cannon. Nothing is more fun than imagining a bunch of Postal Service inspectors in their short shorts boarding a yacht and arresting Steve Bannon in a dramatic high seas sting operation, swinging down on a rope carrying letter-openers like swords.”

Three others were also alleged to have defrauded donors. Trump said only that it was “sad.”

“This is the perfect encapsulation of the Trump era,” Meyers said. “From beginning to end the wall was a nonstop scam. Trump scammed his supporters by telling them Mexico would pay for it. Then we ended up paying for it. Then this sweet potato Fabio over here said he’d raise money for it. Then he scammed everyone again by allegedly skimming money from it.

Make a plan: How getting out the vote has become 2020’s biggest viral challenge

Here's what you actually need to make better cocktails at home