A Narnia-Inspired Design, on Long Island 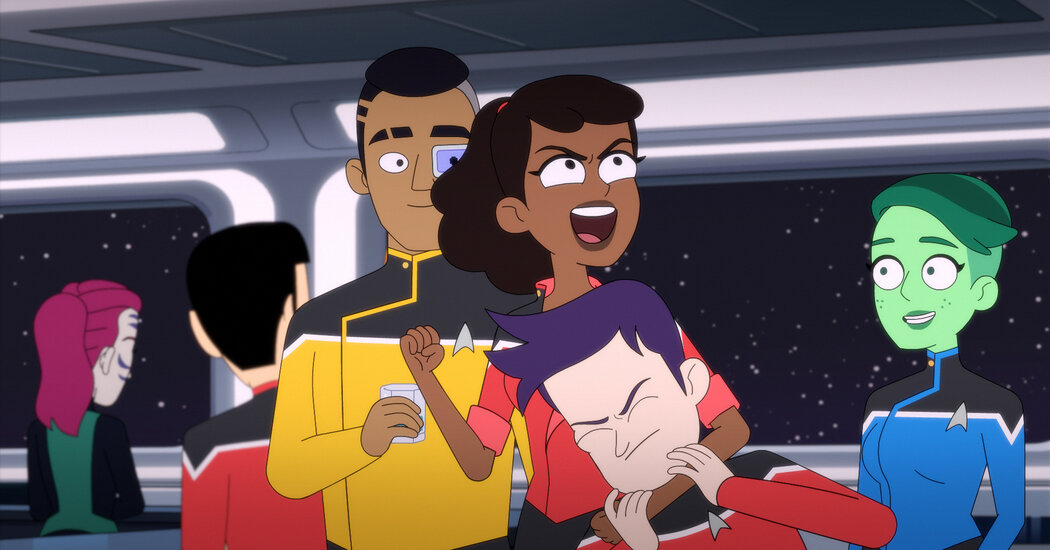 “Star Trek: Lower Decks,” the latest “Trek” extension from CBS All Access (following “Discovery” and “Picard”), goes where no series in the franchise has gone before, at least not intentionally: full-time laughs. The “Trek” shows have had their playful elements from the start. But when your primary source of humor over the years has been making fun of Vulcans or androids who have no sense of humor — well, you see the issue.

“Lower Decks,” whose 10 episodes appear weekly beginning Thursday, also stands out for being animated, but that’s not a first. The earliest “Star Trek” spinoff, back in 1973, was “Star Trek: The Animated Series,” a straightforward continuation of the original for which most of its cast supplied voices. (Its two seasons are also available from All Access.)

The new show goes its own way, in keeping with the somewhat freewheeling vibe the television side of the franchise has exhibited under the supervision of Alex Kurtzman. Developed by Mike McMahan, a specialist in animated, adult-oriented science-fiction comedy — he was a creator of Hulu’s “Solar Opposites” and an executive producer of the category’s ne plus ultra, “Rick and Morty” — it’s about half “Star Trek” fan service and half smutty workplace sitcom.

Apparently, that’s not an easy formula. Through four episodes, “Lower Decks” feels caught in between. It’s a smooth and zippy package, but it doesn’t register very strongly as either a geekfest or a transgressive satire. Which is another way of saying it’s not all that funny. Wherever it’s going, it’s not doing it very boldly.

Its premise, stated in the title, is a bit obvious but certainly workable: After six decades of series and movies celebrating the heroic officers on the bridge, “Lower Decks” focuses on the phaser fodder, the people we usually see in the background running through the corridors or being sucked into space through a hull breach.

The heroes, all ensigns, include Boimler (Jack Quaid), a Starfleet true believer who records his own mock captain’s log each day, and Mariner (Tawny Newsome), an insubordinate badass whose millennial self-absorption may have something to do with her mother’s being the ship’s captain. The ship, like the ensigns, has an inferiority complex: Given the less than heroic name Cerritos, it’s a “second contact” vessel, traveling to planets to handle the paperwork after someone else has sought out a new civilization.

Plots abide by “Star Trek” norms as misunderstandings with funny-looking aliens or viruses picked up on-planet lead to pitched battles that look catastrophic until suddenly everything’s OK again. Boimler gets to spend a lot of time screeching about the rules, much in the style of the touchy teenager Morty on “Rick and Morty.”

As background music, there’s a continual hum of “Trek” nostalgia and gentle mockery, for which viewers’ appetites will vary. Much of this comes in enthusiastic outbursts from Mariner, a Starfleet history buff, though her facts are shaky. (The legendary Spock “fought Khan and some space whales.”) Reference is made to the “most important person in Starfleet history,” an in-joke that will delight fans of “The Next Generation” and “Deep Space Nine.”

In counterpoint, the show tweaks the franchise’s tradition of hyper-virility, with a Kirk- and Riker-like first officer, Ransom (Jerry O’Connell), who can dispatch green giants in hand-to-hand combat and is given to pronouncements like, “Nothing compares to the firm, hot pulse of a joystick in your hand.” The determination to take the “adult” in adult animation seriously can take even less subtle directions, as when a crew member mistakenly offers a token of timber, rather than crystal, to an alien leader and the dignitary recoils and cries, “He’s got wood!” There are several Prime Directives being violated there, one having to do with lazy joke writing.

A Narnia-Inspired Design, on Long Island

Beyond Nature vs. Nurture, What Makes Us Ourselves?

A Woman Escapes Her Kidnapper. Will She Live Happily Ever After?

Managing the Bedbugs, Bathroom Shortages and Big Egos at Yalta

Experiencing War Far From the Battlefield

The best memes from the 2020 Republican National Convention