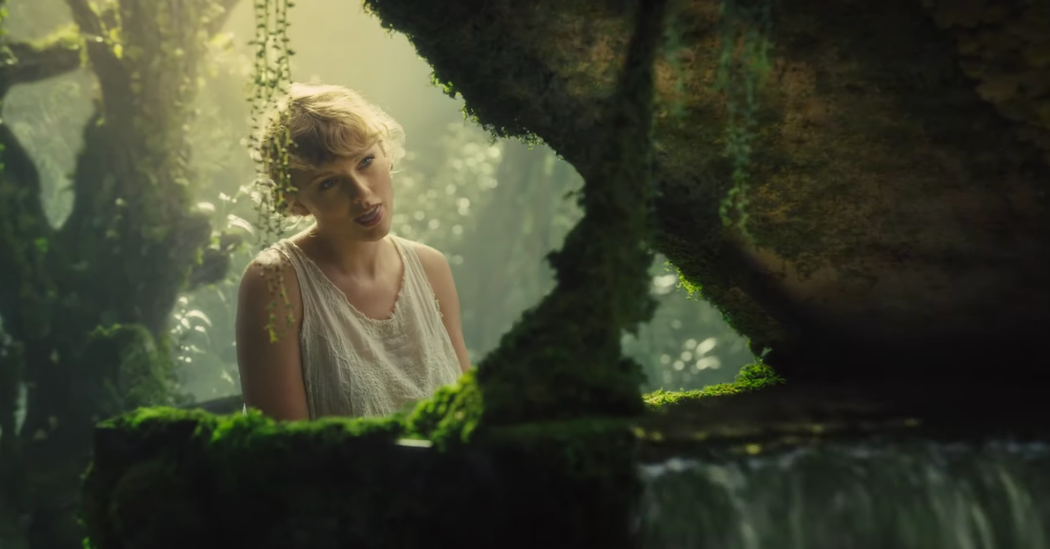 Taylor Swift is officially a grown-up now; she’s 30. She has a past, personal and historical. She offers perspective on her eighth album, “Folklore”: somber and pensive with the producer Aaron Dessner (from the National) and slightly more banging but still somber with the producer Jack Antonoff. Her gift for capturing a moment and an emotion in staccato, concrete one- or two-syllable images comes through her collaborations like “Cardigan” (with Dessner): “Dancing in your Levi’s, drunk under a streetlight.” She sings about how little she knew “when I was young,” letting someone deceive her about how “I was your favorite.” More important, she shows that she has lived through it. JON PARELES

Deaton Chris Anthony, ‘I Love All My Friends’

Here’s a palate cleanser: a dreamy, elegiac, sweet song about hanging with your well-dressed buddies that blends electro-R&B thump and indie rock desolation and ends somewhere near “My Boo.” CARAMANICA

A vocalist with roots in East Africa teams up with a big band from Germany under the guest direction of a Louisianian arranger, to sing an original song about a woman in Turkey that was first recorded on an album inspired by Nigerian music. It’s easy to lose your place on the map when listening to Somi; maybe that’s the idea. On “Ankara Sundays,” over a 21-beat pattern teased out by a finger-plucked guitar and tinkling cymbals, her plum-like alto unfurls the story of an immigrant who finds respite from weekdays of thankless toil in a Sunday celebration. As the groove deepens, the reeds and brass of the Frankfurt Radio Big Band swarm around Somi’s voice, rendering it almost weightless, until finally, singing in wordless harmony with the flutes, it evaporates into air. GIOVANNI RUSSONELLO

The better of a pair of songs J. Cole released this week (early singles from an upcoming album, “The Fall Off”), “The Climb Back” is thick with clever metaphors not heard since the 1990s over a self-produced beat that’s both agitated and exasperated. Cole is a charmingly patient rapper, imagistic, nimble — and very keen to display all of those skills. His metrics are internal, his references are outmoded, his approach is deliberate — this is a song to satisfy one’s own itch, which is how most things should be. JON CARAMANICA

A clip-clopping cumbia beat and jovial horns back up the Chilean rapper and singer Ana Tijoux and the Puerto Rican rapper PJ Sin Suela as they address “la nueva normalidad” — “the new normal” — of pandemic, protests and poverty. The end revs up to a frantic, defiant merengue, as if their patience has evaporated. The song is from Tijoux’s coming album, which is pointedly titled “Antifa Dance.” PARELES

The South African songwriter Vusi Mahlasela’s live album, due in August, is named “Shebeen Queen” in memory of his grandmother, who ran a shebeen — a speakeasy — at her home in the township of Mamelodi. Mahlasela recorded it by putting on a concert of South African oldies in the street where her shebeen was. The mbaqanga song “Umcolo” — “music” in Zulu — is pure upbeat three-chord euphoria; the rhythm guitars are having a party of their own. PARELES

Headie One and Drake, ‘Only You Freestyle’

Over on TikTok, Drake’s toe-dip into Arabic on this song is triggering several types of responses. Some of the funniest are ones that arch eyebrows at his pronunciation. And some of the purest are ones where young people play the lyrics for their mothers, who blush. CARAMANICA

The Avalanches featuring Jamie XX, Clypso and Neneh Cherry, ‘Wherever You Go’

The Avalanches have sampled the “golden album” traveling through interstellar space on Voyager, perhaps toward alien listeners. The track moves from buzzy, beeping, tinkling abstraction to a thumping dance floor where Neneh Cherry is rhyming about how “everyone’s so agitated.” En route is a high-voiced chorus — from the Sydney-based producer and singer Clyps — that’s both perky and threatening: “Wherever you go, you go, we go too.” PARELES

Named for the year of the London-based drummer Kamaal Williams’s birth, “1989” starts out sounding like a straight-up homage to the slung-back grooves and sparkling synth sounds of classic ’80s slow jams. But in comes Miguel Atwood-Ferguson, the violinist and arranger, who turns the track into a rainforest of rich string harmonies. Throughout, Williams’s distinctive, clip-clopping drums never let up on the pocket. RUSSONELLO

The Ballet Photo-Sharing Scandal Enters a New Phase in Court

Best mattresses for side sleepers looking to get cozy