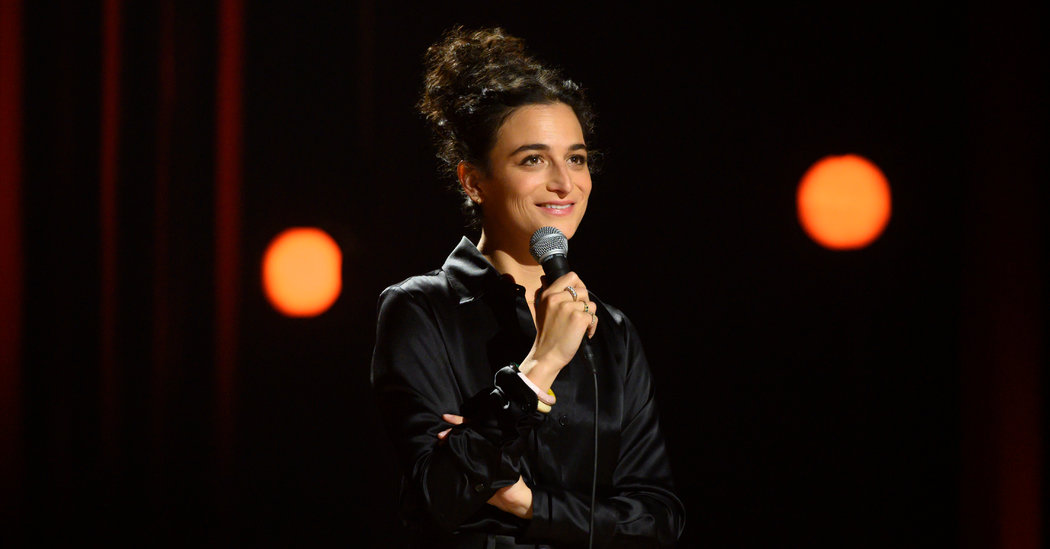 If the news is too stressful, and you’re looking for some jokes to distract you as the weather gets colder, here are some very funny and varied stand-up specials that have come out this fall and are online right now.

It’s currently in vogue to fuse stand-up special and documentary, alternating the comics telling jokes onstage with footage from their lives, including interviews with family members. Only a few weeks after Gary Gulman invited audiences into his childhood home, Jenny Slate does the same in this special, which arrived on Tuesday: She tells jokes before showing interviews with her parents, grandmother and two sisters. (Craig Ferguson adds to the subgenre next month with “Hobo Fabulous.”) These personal scenes echo the humor in unpredictable, even oblique ways. After showing us old notes she wrote about a high school crush named Trevor, that name pops up in a later bit. Slate makes jokes about how her childhood home in Massachusetts was haunted, and there is a clever way that the scenes with her family provide clues to her subconscious. She calls herself an optimist early on, but her peppy charisma has hints of melancholy, an undercurrent that emerges more explicitly when she talks about divorce and dating. At its best, the documentary footage feels revelatory. At its worst, it seems like filler. The special is not dense with jokes, but her fans will be charmed.

Nikki Glaser can write a joke that’s so economical and perfectly calibrated that it’s bulletproof. Take this one from her new special: “I was diagnosed as an ugly child by a caricature artist at a Six Flags.” Pretty much anyone can get a nice laugh from that gem.

In the noble tradition of Dave Attell, Glaser specializes in the lean and harried joke. But in her addictive radio show on Sirius, where she conducts juicy conversations with comics about the stuff you usually say in private, the punch lines emerge in a looser mode. In one episode, she explains to an ex-boyfriend, the comic Pete Lee, that only when she had a new ex to loathe could they be friends. “I’m monogamous with hate and polyamorous with love,” she says.

What makes her new Netflix hour, “Bangin’,” so much fun is that she somehow manages to merge these two styles, talking to the audience as if it were an old friend that it’s time to level with. By beginning with a long riff on oral sex, she invites comparisons with Jacqueline Novak’s recent show on the subject, “Get on Your Knees,” which finds laughs by waxing poetic and philosophizing. Glaser is much more down-to-earth. Her setups talk about puberty or sober sex with zero titillation. She’s aiming for giggling sighs, not giddy shocks. As anyone who has seen her ferocious roast of Alec Baldwin will attest, she can go on the attack with force, but her default is warm self-deprecation that occasionally bleeds into vulnerability. (She says one compliment made her do stand-up for 15 years.) She’s built a honed act that feels like a late-night debrief after everyone has left the party.

There is a quick but affecting moment in Bill Burr’s new special when he describes how heartbreaking it is to see his 2-year-old daughter notice his anger. He has tried to muffle it. But now, he says, he’s got to change, to avoid passing down the “demon in my family tree.”

It’s startling how much Burr talks about finding calm and forgiveness in “Paper Tiger,” a robustly funny special. Bristling anger has long been his hallmark. (His impromptu rant about Philadelphia is one of the most operatic temper tantrums in comedy history.) But Burr has always been more complex than he appears. Onstage or in his podcast, he comes off as the ultimate macho blowhard at the bar, but his greatest jokes are about the prison of masculinity. His new bit about how men can’t take baths is a fine addition to this genre. “There’s no way as a man to take a bath and not think about killing yourself,” he says. “There’s something about slipping into that coffinlike thing.”

He’s very smart but constantly calls himself dumb. His cockiness pivots into vulnerability. As strong as his point of view is, Burr gravitates toward arguments and shifting perspectives. His jokes are finely engineered, and presented in an order to increase their contradictions, to add incongruities. This comes into stark relief when he addresses #MeToo. He insults feminists, delights in trolling and trots out the predictable complaints about cancel culture and people who are triggered. But listen closely and you can find enough material to argue that he gives a passionate defense of #MeToo, one far more personal than any A-list male comic has. And yet he also delivers a broadside against its excesses that seems to make a case for forgiveness. It’s a sign of the quality of this comedy that it can feel like a polemic and its opposite at the same time.

Straight male comics have been telling gay panic jokes for decades, so it’s only fair that a gay comic has turned the tables. Describing a mixed-martial-arts class, Jaboukie Young-White says his instructor told him that when he’s put in a chokehold, he must do whatever it takes to escape. As he mimes being choked, Young-White moans, “Daddy!” After he explains that this strategy worked, he builds on the punch line with a shrugging delivery: “Sometimes love wins.”

Already a rising star, Young-White makes a breezy and assured stand-up special debut (available online at cc.com) in “Comedy Central Stand-Up Presents,” a series of half-hours. Most of the jokes here will be familiar to his die-hard fans, but for others, this is a winning if low-key introduction that shows off a variety of comic modes, starting in a “bro”-y character and moving into multimedia with the help of a slide show about which insects are gay. The special hits its stride when it gets to the point where he tells jokes in his own voice, without visual aids. Loping around the stage with eyelids at half-mast, he hides his swagger behind an offhand style, but he’s smart enough to let the mask slip periodically. He knows he’s not ugly: “On a 1 to 10 scale, I don’t think I could model, but I could definitely end a Republican senator’s career.”

A Former TV Critic Puts Himself Under the Microscope

A Former TV Critic Puts Himself Under the Microscope