‘The Last American Aristocrat: The Brilliant Life and Improbable Education of Henry Adams,’ by David S. Brown: An Excerpt

New & Noteworthy Poetry, From Eavan Boland to the African-American Canon 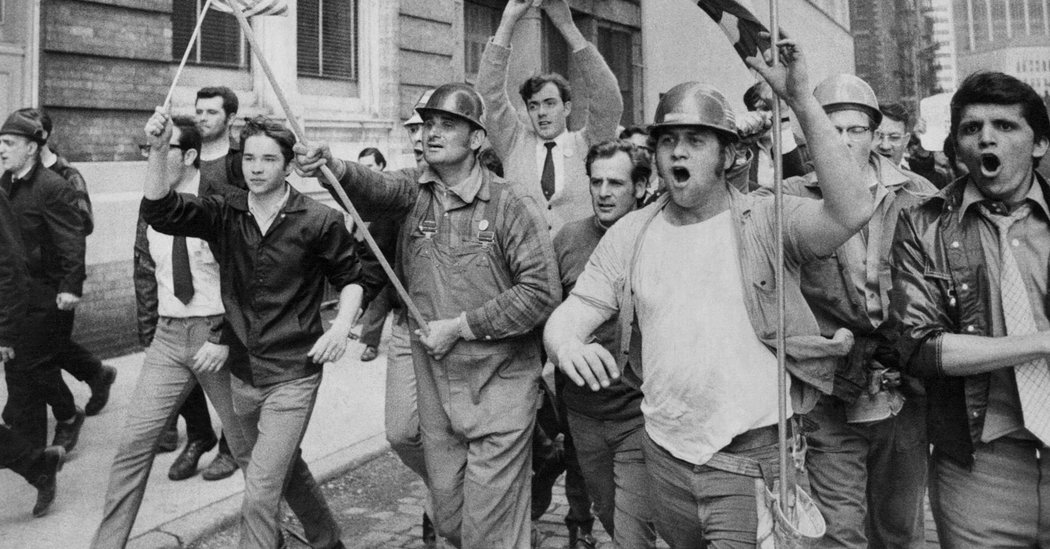 THE HARDHAT RIOT
Nixon, New York City, and the Dawn of the White Working-Class Revolution
By David Paul Kuhn

The nation, we keep hearing on television and in social media blather, is politically divided as never before. Nonsense. The ostensibly united states have been disunited many, many times, and “The Hardhat Riot,” by David Paul Kuhn, vividly evokes an especially ugly moment half a century ago, when the misbegotten Vietnam War and a malformed notion of patriotism combined volatilely. They produced a blue-collar rampage whose effects still ripple, not the least of them being Donald Trump’s improbable ascension to the presidency.

Let’s remember what the United States was like in 1970: a country torn apart after years of political assassination, unpopular war, economic dislocation, race rioting and class disharmony. The last thing it needed in 1970 was more open fighting in the streets. But that’s what it got on May 8, days after President Richard Nixon had expanded America’s Southeast Asia misadventure into Cambodia and Ohio National Guardsmen shot dead four students during antiwar protests at Kent State University.

Kuhn, who has written before about white working-class Americans, builds his book on long-ago police records and witness statements to recreate in painful detail a May day of rage, menace and blood. Antiwar demonstrators had massed at Federal Hall and other Lower Manhattan locations, only to be set upon brutally, and cravenly, by hundreds of steamfitters, ironworkers, plumbers and other laborers from nearby construction sites like the nascent World Trade Center. Many of those men had served in past wars and viscerally despised the protesters as a bunch of pampered, longhaired, draft-dodging, flag-desecrating snotnoses.

It was a clash of irreconcilable tribes and battle cries: “We don’t want your war” versus “America, love it or leave it.” And it was bewildering to millions of other Americans, including my younger self, newly back home after a two-year Army stretch, most of it in West Germany. My sympathies were with the demonstrators. But I also understood the working stiffs and why they felt held in contempt by the youngsters and popular culture.

New social policies like affirmative action and school busing affected white blue-collar families far more than they did the more privileged classes that spawned many antiwar activists. For Hollywood, the workingman seemed barely a step above a Neanderthal, as in the 1970 movies “Joe,” about a brutish factory worker, and “Five Easy Pieces,” in which a diner waitress is set up to be the target of audience scorn. (Come 1971, we also had “All in the Family” and television’s avatar of working-class bigotry, Archie Bunker.)

It was, too, an era when New York was changing fast and not for the better. Corporations decamped for the suburbs and warm-weather states. Kuhn notes how between 1967 and 1974 the number of Fortune 500 headquarters in the city fell to 98 from 139. Whites moved out in droves. Crime rose, and if you proposed getting tough on felons you risked being labeled a racist. Roughly one in three city residents was on public assistance. Municipal finances were in tatters. In short, 1970 New York was a caldron of misery, one rare bright spot being its basketball team, the Knicks, neatly integrated and en route to its first championship.

Kuhn quotes the estimable Pete Hamill as observing back then that the workingman “feels trapped and, even worse, in a society that purports to be democratic, ignored.” One could go further. Many blue-collar workers felt scorned — by the wealthy, by the college-educated, by the lucky ones with draft deferments, by every group that qualified as elite. They sneered back, especially at the patrician New York mayor. The way many of them referred to Lindsay, you’d have thought his first name was not John but, rather, an all-too-familiar obscenity.

Understanding hard-hat resentment, however, does not translate into excusing the violence that hundreds of them inflicted that May 8, the 25th anniversary of the Allied victory over Germany in World War II. Self-styled paragons of law and order, they became a mob, pounding and kicking any antiwar youngster they could grab, doing the same to bystanders who tried to stop the mayhem and justifying it in the name of America. Kuhn ably and amply documents the cowardly beating of women, the gratuitous cold-cocking of men and the storming of a shakily protected City Hall, where the mayor’s people, to the hard hats’ rage, had lowered the flag in honor of the Kent State dead.

“A tribal tension had infused downtown,” Kuhn observes. Among the tribes were the police, who were anything but New York’s finest that day. Mostly, they stood aside while the hard hats ran amok; examples of their nonfeasance abound. Some of them even egged on the thuggery. When a group of hard hats moved menacingly toward a Wall Street plaza, a patrolman shouted: “Give ’em hell, boys. Give ’em one for me!” Yet the police were never held accountable for failing to stop the marauding, and “few hard hats owned up to the extent of their violence.”

Kuhn favors straightforward journalistic prose, with few grand flourishes. In setting scenes, he tends toward a staccato, some of it overdone: One speaker “exuded Establishment. The jacket and tie. A WASP face with a Roman nose. The side-swept hair, straight and trim with delicate bangs, a tidy mustache, pinkish skin.” Hardly every antiwar protester merits his go-to characterization of them as potty-mouthed hippies.

But over all, this is a compelling narrative about a horrific day. In their fury, the hard hats left more than 100 wounded, the typical victim being a 22-year-old white male collegian, though one in four was a woman; seven police officers were also hurt. Kuhn concludes that while the workers plainly came loaded for bear, their tantrum was essentially spontaneous and not, as some believed, part of a grand conspiracy.

That said, they were just what some conservative strategists were looking for. Patrick Buchanan, then a Nixon aide, said of blue-collar Americans in a memo to the boss, “These, quite candidly, are our people now.” He wasn’t wrong. Republicans have since catered as ever to the rich but they have also curried favor with working-class whites, while Democrats seem more focused on others: racial minorities, gays, immigrants. Thanks in good measure to white blue-collar disaffection, Trump in 2016 narrowly won Pennsylvania, Michigan and Wisconsin, a hat trick he may yet pull off again in November.

In a way, Vietnam continues to cast its shadow. A short walk from those 1970 streets of chaos, there is a memorial to the 1,741 New Yorkers who died in the war. Its dominant feature is a wall of thick glass etched with reflections on combat, including part of a haunting letter sent home from Vietnam in 1968. “One thing worries me — will people believe me?” The Navy lieutenant Richard W. Strandberg wrote. “Will they want to hear about it, or will they want to forget the whole thing ever happened?”

Indeed, most Americans forgot about Vietnam long ago. The same has been true about the shameful hard-hat riot of 1970. Until now.

‘The Last American Aristocrat: The Brilliant Life and Improbable Education of Henry Adams,’ by David S. Brown: An Excerpt

New & Noteworthy Poetry, From Eavan Boland to the African-American Canon

When A.I. Falls in Love

Do You Have a Conflict of Interest? This Robotic Assistant May Find It First

Joy Williams and Her Unique Views of America

New in Paperback: ‘The Grammarians’ and ‘Edison’

‘A Conflicted Cultural Force’: What It’s Like to Be Black in Publishing

What our staff bought in September