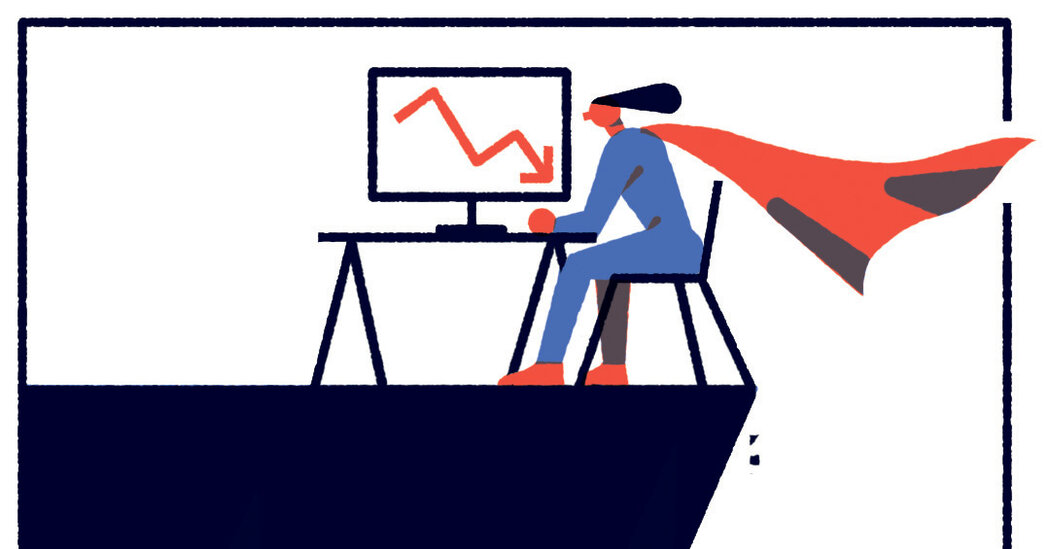 Anna Tromedlov is a freelancer employed through a temp agency. She does mostly data entry, lives on the margins, shows up for interviews in ill-fitting clothes. No benefits, of course. No insurance. She doesn’t have enough money for groceries and struggles to “ward off scurvy.” Millennials, man.

The catch is that Anna is a villain’s henchman, or a “hench,” one of the countless factotums, gofers, grunts, peons, warm bodies that villains use to do their evil bidding. In Natalie Zina Walschots’s witty and inventive first novel, these workers are treated as expendable, often melted or bisected in crossfire, ground under the boots of superheroes in the name of law and order.

The most powerful of these is Supercollider, a sentient battering ram of blond hair and wide shoulders. While henching for a middling villain called Electric Eel, Anna has a run-in with Supercollider and ends up with a shattered femur. Laid up on a friend’s couch for months, she starts researching the total amount of collateral damage Supercollider has caused others, publishing her findings online. “I realized there was a whole system devised to describe such forces, and what they cost,” Anna thinks. “The currency was years of human life.”

Walschots is penetrating on this currency: “Supercollider had decided that a kid’s little finger and the Eel’s ransom demand held more value than 152 years in hench lives.” Good or bad, those years have been taken from them by a tyrant dressed “in a cape playing judge and executioner.”

Anna’s research attracts the attention of the world’s worst supervillain, an insectoid named Leviathan, “the monster lurking beneath the surface of the world” who recruits her to come work at his sprawling compound. He has phosphorescent armor, a pet iguana with its own staff, and a mouth appendage that bends around a coffee mug “as delicately as the mandibles of a crab.”

Like working for a tech giant with the mandate to Be more evil, a job at Leviathan Corp. comes with perks. His employees live comfortably on campus. There are benefits and opportunities for advancement, free chai in the break room. It’s utopian, creating the expectation of Anna’s eventual disillusionment, of rot at the foundation. But none comes. It’s simply a fine place to work and Leviathan himself is fair and generous, if demanding.

The armor conceals deep hurt, it turns out. Leviathan is a sensitive guy with an old grudge toward Supercollider, and wants Anna and her data to help take him down. The novel works well as a piece of office satire but loses its way in the last third as it refocuses on the undoing of Supercollider. Dragged down by long action sequences, and without a glimpse of the outer world — no panorama of civilian desperation, no Gotham on the verge — it becomes less a subversive take on power and more a straightforward comic book story.

Still, the pleasure of the novel is the slow rollout of the rules. Creating a universe involves inventing lots of little problems, and the solutions here don’t disappoint. What happens to elderly superheroes, for instance, when they are no longer in control of their powers? They’re sequestered in retirement facilities with lead walls. How do superheroes emerge in the first place? Everyone is screened in adolescence as a matter of course.

The ending suggests that a potential solution, at least for Anna, might be a solid job, a nice bright workstation, a handful of likable colleagues and ambition fulfilled. Allegiance is required, Walschots seems to say, to either corporate tech lords or the police state. Bleakly, maybe realistically, the novel does not leave room for a third option: that the only worthy master is no master, and that our unlucky years can, in fact, be our own.

With Stores Closed, Barnes & Noble Does Some Redecorating

Newman from ‘Seinfeld’ releases anti-Trump PSA about the Postal Service