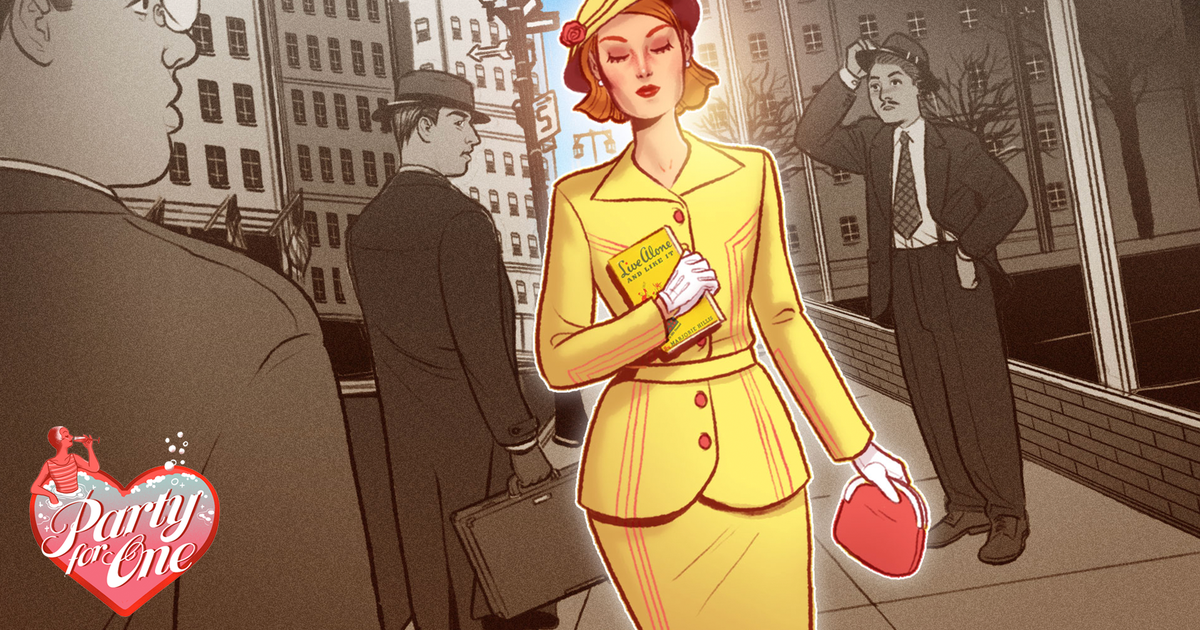 In Party for One, Mashable explores single life in 2020, from Carly Rae Jepsen’s iconic single anthems, to the beauty of alone time, and the fascinating history behind the single positivity movement.

I come from a long line of independent women who’ve quietly shrugged off the mantle of convention. My great grandmother was a teenager working in service when she became pregnant, and subsequently cast out by her employer when her “condition” was discovered. Her name was Ellen Mathilda, and the baby she bore was my grandmother, Annie. Unwed in Ireland in 1915, Ellen singlehandedly raised her daughter in challenging circumstances.

Tales of the quiet dignity and resilience of these two women were regaled to me as a child, and I grew up in awe of both of them. Their lives were not easy, though — both women were poor, vulnerable, and alone in the world. I often wonder how different their lives would have been had they been born a century later and, crucially, if they’d had more financial stability.

One century on, the state of being single has evolved greatly in many respects. Gone are the days of being looked upon as a spinster, blue stocking, fallen woman, or social pariah for breaking with convention — intentionally or otherwise. We now find ourselves living through the age of single positivity, a movement that garnered much discussion when Emma Watson coined the term “self-partnered” as a euphemism for single in late 2019. Around that time, articles began to discuss the “the sudden, surprising rise” of the single positivity movement.

Here’s the thing, though: the single positivity movement is neither new, nor sudden or surprising. In fact, the history of the single positivity movement dates back to the late 19th century and the beginning of the 20th century. Let’s not forget that Watson is not the first woman in history to have ever made a public statement declaring her singledom — for one, in 1558 Queen Elizabeth I batted away parliament’s entreaties to marry, stating, “I have long since made choice of a husband, the kingdom of England.” And I’ll wager that she certainly won’t be the last.

In the late 19th century, the New Woman ideal emerged. The New Woman was educated, earning money, independent, political, sexually liberated, and, naturally, met with fear and criticism. The term, which was first used by Irish writer Sarah Grand in 1894 to describe independent women yearning for a culture change. The trope went on to be popularised by Henry James through his writing — the eponymous heroine of Daisy Miller and Isabel Archer in Portrait of a Lady both embodied the traits of the New Woman. This new version of womanhood came just 20 years after Susan B. Anthony, one of the leaders of the American suffrage movement, predicted “an epoch of single women” in 1877, stating, “if women will not accept marriage with subjugation, nor men proffer it without, there is, there can be, no alternative. The woman who will not be ruled must live without marriage.”

When the 20th century arrived, so too did big change. As author Rebecca Traister notes in her book All The Single Ladies, the 1920s saw a drop in rates of singlehood and the marriage age following a backlash against the New Woman. But the seed for rejecting marriage had been planted. “In 1924 the Yale Review posthumously published a piece by the sociologist William Sumner, who argued that the industrial age’s new opportunities for women had ‘dislodged marriage from its supreme place in their interest and life plan,'” writes Traister.

In 1936, a book was published that proved so popular it sparked a movement. Marjorie Hillis wrote Live Alone and Like It: A Guide for the Extra Woman, an advice book that became a bestseller and turned the idea of women living alone — and all the social attitudes that came along with it — on its head. Joanna Scutts, author of The Extra Woman: How Marjorie Hillis Led a Generation of Women to Live Alone and Like It, tells me Hillis likely would not have seen herself as part of a movement, but “she did urge women to call themselves ‘Live Aloners’ rather than spinsters or single—she wanted them to define themselves by what they’d chosen, rather than what they lacked.”

“She did urge women to call themselves ‘Live Aloners’ rather than spinsters or single.”

“A minister’s daughter turned Vogue editor turned self-help guru for single women like herself,” according to Scutts, Hillis was born in 1889 and grew up in Brooklyn. Hillis “fully expected to get married at a young age, but although she had a few ‘beaux’ it never happened.” But what she did discover was that she really loved working. “At Vogue, she became close friends with the magazine’s longtime editor, Edna Woolman Chase, who was divorced,” says Scutts. “By the time she was in her late 40s, both her parents had passed away, and she was living in an apartment in Manhattan from which she could walk to her office next to Grand Central Station.”

Hillis had the perfect set-up for her life thanks to some careful arrangements she’d made. “In particular, she was at a safe distance from her siblings and their children, so she couldn’t be roped in as a maiden aunt/on-call babysitter,” says Scutts. “She went to the theater often, loved fashion and travel, and had a wide circle of friends, many of whom lived much as she did.” She turned her own stories — and that of her friends — into anonymised case studies for the book.

The book was “a runaway hit, which took everyone by surprise, including the publisher—they sold 100,000 copies before the end of the year.” Scutts says The Depression was “the heyday of self-help publishing in America” but most books didn’t speak to women, and definitely not single women. “The book found readers beyond that demographic, though: First Lady Eleanor Roosevelt was a fan, and the president was spotted reading a copy on his yacht over the summer,” says Scutts. “It even inspired a spoof (Wake Up Alone and Like It) and its title became a catchphrase.”

So, did Marjorie Hillis pave the way for future feminist and single empowerment movements? “One thing she certainly did was make single women visible in the culture in a way they hadn’t been since the suffrage movement, but she was less interested in advancing the collective political status of women than in encouraging them to choose and live the lives they individually wanted,” says Scutts.

A taste of economic independence

The Depression and World War II brought further change by bringing big numbers of women into the workforce. This was a new thing for privileged middle class white women who’d never worked before. “For the many Black women who had always worked, the opportunity for skilled jobs, albeit for less money than their white counterparts, expanded,” writes Traister. As Scutts says, “during the Depression, marriage rates went down and thousands more single women joined the workforce, and got a taste of economic independence. Then with the arrival of World War II, that number vastly increased, and included married women as well.”

After the war, however, there was a drive toward domesticity and marriage. In the 1950s, singlehood becomes an undesirable state to be avoided at all costs. These movements and their roles in shifting attitudes towards marriage and singleness were centred upon white privileged women who had more freedom and choice over their paths in life at that time. “Of course it’s important to note that this narrative of advance and retreat, of career versus family, and of feminist ‘waves,’ is very much a white narrative,” notes Scutts. “In the U.S., Black women have never historically had the choice of whether or not to work, and mostly have not had access to the kinds of professional careers that could bring privileged women like Marjorie Hillis genuine autonomy, security, and fulfillment.”

Hillis ended up getting married in 1939 and, per Scutts, “the newspapers had a field day with the news, although she tried to insist that she’d never said the single life was preferable, just that it could be enjoyable when it came, as it inevitably would.” Hillis’ husband passed away after 10 years together, so she entered the 1950s as a single woman. “She wrote two more books encouraging widows and divorcees to hold onto their independence and forge happy single lives — but her message was a lot less popular in the postwar conservative era.”

The ebb and flow of movements

The single positivity movement did not spring forth suddenly from the ether. Since the 19th century there has been an ebb and flow of movements, trends, and ideas which have evolved how we view the state of being single. Historically, past movements for single women have not been intersectional or inclusive. So, if we’re to learn something from the past, let it be that a movement about single women should be for all single women no matter her race, class, sexuality, or disability.

“I think we always want our movements to be new, and there’s nothing wrong with that — newness is exciting!” says Scutts. “Plus I know that there are historians of the 19th century who would point to the huge importance of single women to political activism, so it’s not like Marjorie Hillis herself was coming out of nowhere.” Rebecca Traister’s book explores this topic in great depth.

“But what I think is still really important about her work is the way she championed pleasure and self-indulgence in a really upfront way, which I think is still radical and subversive for women to do,” adds Scutts. “She doesn’t believe you can buy your way to happiness, but she certainly argues that surrounding yourself with beautiful objects, dressing well, and taking the time and energy to treat yourself well, even if nobody is watching, are vital and valuable.”

As someone who lives alone and likes it (see what I did there), the moniker Live Aloner is certainly one I’ll be adopting henceforth. Another fun fact about Hillis, per Scutts: “She was a big believer in fancy pajamas and breakfast in bed!” That’s certainly a belief I can get on board with.

Pornhub’s lifetime Premium membership is back for Black Friday

What’s on TV This Week: ‘A Cry in the Dark’ and ‘The Masked Singer’

Brown says ‘Alzheimer’s is evil’ in tribute to late grandmother