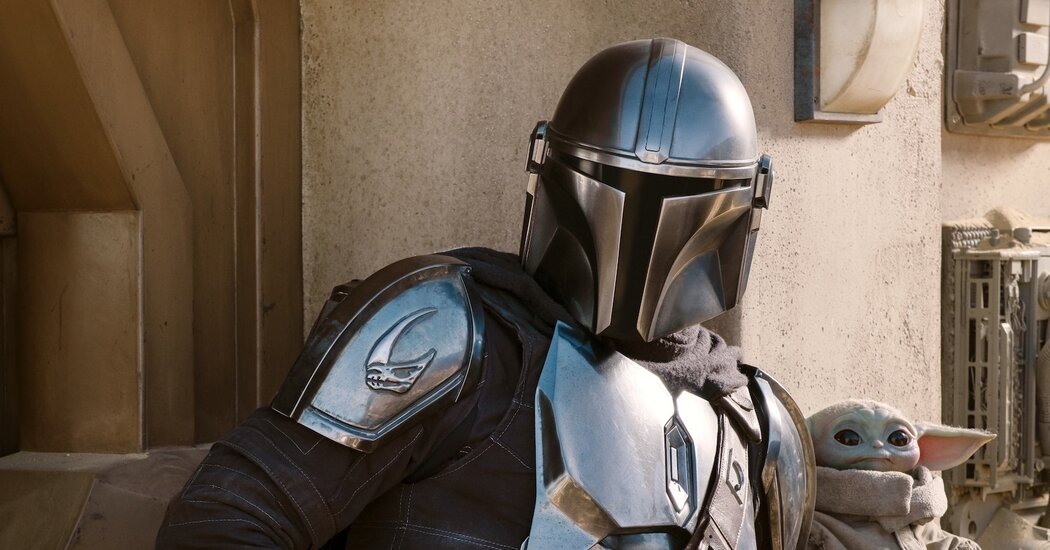 Almost a year ago, the “Star Wars” spinoff series “The Mandalorian” debuted on Disney+ with a first episode that had been kept mostly under wraps — unseen by the critics and largely unspoiled by advertising. That secrecy preserved what turned out to be a wonderful surprise: the introduction a fun new character, called “the Child” on the show but immediately dubbed “Baby Yoda” by the fans. This tiny, adorable, superpowered creature became TV’s breakout star last fall, raising the question of what Jon Favreau, the creator of “The Mandalorian,” might possibly spring on the audience in the second season.

Well, it turns out there’s no equivalent to a toddler-sized Yoda in the Season 2 premiere. But how about a full-sized Timothy Olyphant?

Olyphant plays Cobb Vanth, the title character in this season’s debut episode, “The Marshal.” The show’s hero, Din Djarin (Pedro Pascal) — the Mandalorian himself — meets Cobb when he rides into the Tatooine mining community of Mos Pelgo in search of another member of the Mandalorian order of warriors and bounty hunters. It tuns out that our Mando has been misinformed. There are none of his kind living in Mos Pelgo, only a loping lawman who got hired to protect a town partly because he happened to buy some old Mandalorian armor off some Jawas.

It’s hard to overstate how delightful it is when Olyphant first walks onto the screen as Vanth. Even under a Mandalorian helmet, the actor’s sun-baked California drawl is instantly recognizable. He also gives himself away by the way he stands, with one hip thrust sideways, skinny legs leaning at a steep angle, arms afloat at his sides … as though he’s ready at a moment’s notice to dive to the ground while firing a blaster. Even in the “Star Wars” universe, the man who played Seth Bullock and Raylan Givens looks like … well, like a marshal.

The first season of “The Mandalorian” relied a lot on guest stars like Olyphant, who usually weren’t announced to the press ahead of time. (Favreau and Disney do like their little surprises.) Building the Season 2 premiere around a team up between the Mandalorian and the Marshal is a reassuring sign that this show probably won’t move too far away from what worked last year.

Season 1 built to a satisfyingly epic showdown, featuring most of the series’s major characters. But much of the appeal of “The Mandalorian” has come from its old-fashioned episodic structure. Nearly every chapter so far has followed the hero and the Child on a new adventure in a new location. So while “The Marshal” picks up where last season’s finale left off — with Mando accepting the assignment to reunite the Child with his own people — the story immediately reverts to the task-oriented plotting that made the first season such a joy.

The length of “The Marshal” is somewhat worrisome. Season 1 episodes of “The Mandalorian” typically clocked in at between 30 to 40 minutes. The Season 2 premiere runs 54 minutes, and I can’t say every second is necessary. The bulk of this chapter has to do with Vanth and Djarin working together with a cadre of Tusken Raiders to save their region from a Krayt dragon: a kind of giant underground worm-thing that eats living creatures and vomits up torrents of venom. The climactic action sequence features two steely men of action zipping around in Mandalorian jet-packs. It’s nifty to look at, but it takes a long time to set up a fairly routine man-vs.-monster shootout.

Still, there are plenty of highlights scattered throughout this hour. Favreau is credited as both the writer and director, and he sets the right tone from the start with a good, pulpy opening sequence. When the Mandalorian and the Child visit a shady character named Gor Koresh (John Leguizamo) at an underground ax fight, Favreau lingers over the grubby details of a crumbling neighborhood with graffitied walls and an off-the-books club filled with creepy aliens. The scene pays off well, too, with the Child zipping up into his little floating egg while Mando clobbers his way through every thug in the room.

Once he’s back on Tatooine, the Mandalorian reunites with Season 1’s hilariously energetic Mos Eisley spaceport manager, Peli Motto (Amy Sedaris), who once again coos over the Child and asks if she can have him. (When her offer is rejected, she tells Mando to let her know “if this thing ever divides or buds.”) And then Din is off to Mos Pelgo, mounted on a speeder-bike that rides steadily over the sand dunes … like a horse crossing Monument Valley in old John Ford western.

So sure, “The Marshal” could be a little more taut. But there’s an assuredness to what Favreau and his cast and crew are doing here, calling back once again to classic movie adventures, in much the same way George Lucas did with the first “Star Wars” film.

And there’s something else going on, too — it was reflected both in bits of dialogue, as when Peli gripes that she doesn’t even know “who to complain to” about her creaky R5 unit, and in longer expository interludes, like Cobb’s story about the evil consortium that swooped into Mos Pelgo on the night the Death Star blew up. These are all part of what’s quickly becoming the larger theme of “The Mandalorian,” about what happens when a galaxy falls into disorder and disarray. Nothing works right. No one’s where they’re supposed to be. Even good folks like the Marshal are wearing outfits that don’t belong to them.

It’s up to the Mandalorian and the Child to start putting things back in place. And if this season is as good as the last one was, they’ll keep doing that one small step at a time, side-by-side with some of Hollywood’s greatest character actors.

This Is the Way

Dave Prowse: ‘My first recollection of him was he was enormous’

The Beat at the Heart of ‘Lovers Rock’

He Was a Rising Jazz Pianist. Then His N.Y.C. Dreams Were Shattered.

‘Temping’ Is a Workplace Drama for One. You’re Hired.