The Music and the Mirror 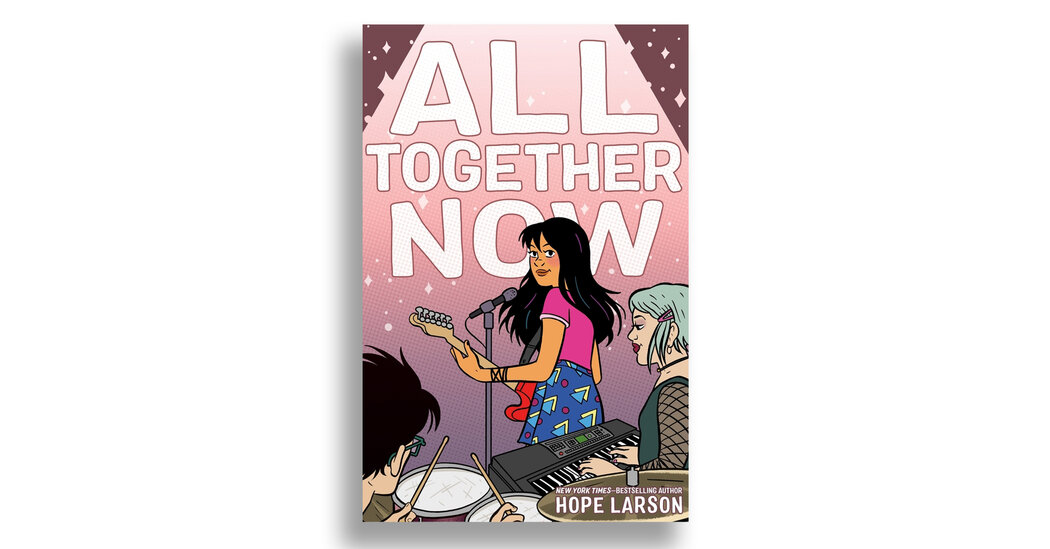 Garage bands, first kisses, broken friendships; it’s a winning combination. ALL TOGETHER NOW (Farrar, Straus & Giroux, 192 pp., $12.99; ages 10 to 14), from the acclaimed comics creator Hope Larson, tackles all these topics and more in a story that feels fresh, and will be immediately relatable to a middle grade audience.

“All Together Now” acts as a sequel to Larson’s 2018 graphic novel “All Summer Long,” but it works perfectly well as a stand-alone book.

Bina, an eighth-grade singer-songwriter, wants to start a band. So far, the fliers she posted around her Los Angeles middle school have netted only one member: Darcy, a Brooklyn transplant and instant best friend who plays keyboard. Together, Bina and Darcy recruit a drummer named Enzo, a smart, shy boy with “cute nerd vibes” who convinces them to change the band’s name from Fast Fashion to the Candids.

Bina soon becomes a third wheel in her own band, as Darcy and Enzo start dating and want to move the band in an edgier direction. When Bina realizes she’s losing her new best friend, her band and her songs all at once, she struggles to find her authentic voice.

The action in “All Together Now” is engaging and fast-paced. Bina takes revenge on her former bandmates (now calling themselves AC/Darcy) in epic fashion and the novel culminates in an opportunity to play a gig at GBGB, an all-ages performance venue behind the local GalaxyBurger.

Subtly woven through these plot points is Bina’s journey as an artist. Larson never speaks down to her audience; she gives Bina’s dedication to her songwriting great respect. Guided by supportive family and friends, Bina comes to understand that artistic fulfillment may not happen on a convenient timeline. As her neighbor Charlie (the sister of her childhood friend Austin) puts it, Bina is “a late bloomer. Or, uh, an at-your-own-speed bloomer.” Finding your authentic voice takes time and patience.

Bina’s father, a painter, offers advice while he’s working on a canvas: “It’s a mess right now, but sooner or later, it’ll come together.” Bina’s mother takes her on a spur-of-the-moment camping trip to Joshua Tree. It’s a lesson in the benefits of pressing “pause” and allowing yourself the time to find inspiration in the wider world.

The importance of taking one’s time also shines through in the relationships between Bina and her friends. Bina finds herself on an unexpected date with Austin. The outing is awkward, but nuanced and complex in its awkwardness. As they sit holding hands, a string of questions runs through her mind: “Do I want to date him? I don’t know! What’s wrong with me? How can I not know that?!”

Like songwriting, relationships are complicated and difficult to navigate, and Bina comes to accept that there’s no set timeline for love, either. As she eventually tells Austin: “I think maybe I want to date you one day, but right now? I just can’t.”

Larson gently reminds her readers — at an age where it can feel like peers’ relationships are moving at lightning speed — that there’s no rush. Music is Bina’s great love right now, and that’s just fine.

Larson’s artwork is crisp and bold; perfectly suited to her story and characters. Like the art in “All Summer Long,” it is monochromatic, relying on graphic blocks of black, white and shades of dusty mauve. The characters themselves are diverse in race, body shape and sexual orientation.

The visual portrayal of Bina’s love of music, and her joy in losing herself in the creative process, is especially wonderful.

Losing and finding oneself is central to the book and its characters. All of us are imperfect; we make mistakes and lose ourselves along the way. With time, patience and honesty, we can admit them and grow.

How to Judge the Booker Prize in a Pandemic

Too Pop? Too Weird? A.G. Cook of PC Music Is Stepping Out on His Own

Jazz Lives in Clubs. The Pandemic Is Threatening Its Future.