The Pop Musical: Go Big (and Loud) or Go Home 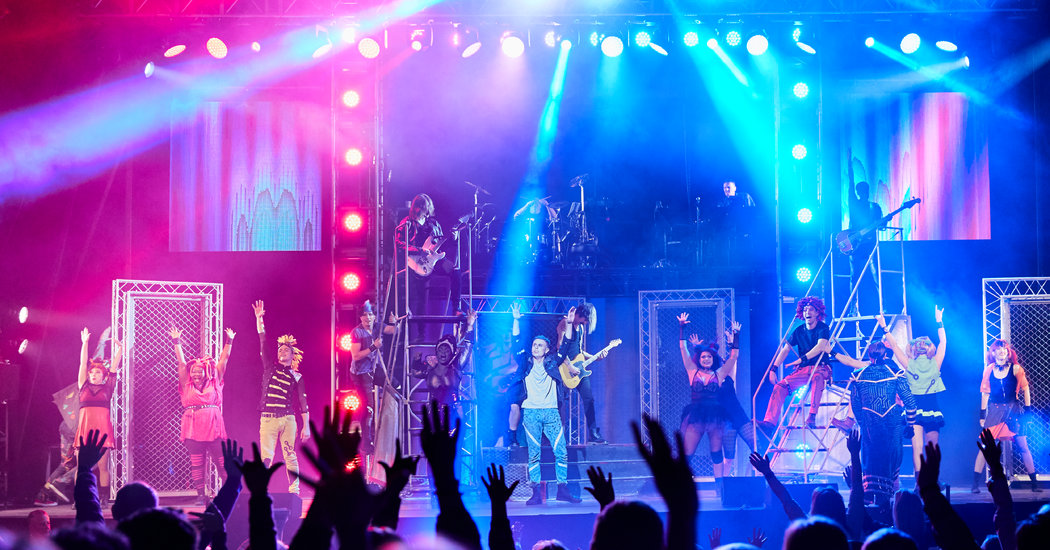 Sometimes, I crave a musical where grandiosity is unencumbered by logic and good taste. I don’t need a book that makes sense when I can feast on eye-popping visuals backed by an eardrum-busting sound system. It’s O.K. for the brain to take a rest while the senses work overtime. Broadway knew that once, or at least Florenz Ziegfeld did.

Musicals have gotten psychologically complex lately, and I appreciate those, too. Dramatically sensitive and tastefully intimate, “Once,” “Fun Home,” “Dear Evan Hansen” and “The Band’s Visit” are credits to the art form.

But once in a while, I don’t want beige; I want a rainbow connection. I want a musical where nutty excess and carefree one-upmanship rule.

A musical in which as many numbers as possible aim straight for the pleasure zone, unperturbed by the need to advance the plot or supply motivation.

A musical where the only possible reaction is: What the hell was that?

Shows based on pop catalogs are well suited to this approach, because those songs tend not to be tethered to a narrative arc, leaving directors and writers the freedom to go wild.

Many such musicals use the songbooks to tell the life stories of the artists that made them famous. They often wrestle with how to make the music fit — or, as Jesse Green put it in his New York Times review of “Tina: The Tina Turner Musical,” “songs bent into improbable shapes to serve a story they weren’t designed for.”

So edifying. So (mostly) dull. Why even bother?

In the past six months, however, New Yorkers have been treated to three productions that don’t shy away from pop and rock excess. The best ones did more: They reveled in it.

The season of clobbering maximalism began with the July opening of “Moulin Rouge!” on Broadway, and continued when the tour of Jim Steinman’s “Bat Out of Hell” made a pit stop at New York City Center the following month. The trifecta was completed when “We Will Rock You,” which retrofits Queen songs, finally made its New York City debut this month with six performances at the Hulu Theater at Madison Square Garden. Appropriately, the show, a huge hit in the West End, had its American premiere in Las Vegas, in 2004.

“Moulin Rouge!,” based on Baz Luhrmann’s 2001 film, is a doomed love story set in a fantastical Paris around the turn of the 20th century. It boasts a Frankenscore made up of bits and pieces from a whopping 70 hits — about a third of them crammed into a medley in which nearly every line is pulled from a different song.

The other two shows rely on single musical sources. Meat Loaf’s original “Bat Out of Hell” album, written by Steinman, came out in 1977, and was based on a concept the songwriter had started working on in the late 1960s. The musical’s book incorporates several other Steinman songs, and happens to be oddly similar to the unabashedly comical one Ben Elton cooked up for “We Will Rock You.” Both are set in a dystopian future where handsome young dudes lead the charge against a repressive order.

Of this trio, the sci-fi-flavored productions got closest to the sweet spot because they fully committed to the cray-cray. “Moulin Rouge!,” on the other hand, distrusts its own musical DNA.

Two out of three ain’t bad, as Steinman once wrote.

Whereas the other productions were touring — safely distant from the withering glare of New York theater critics, who are not, as a whole, known for rocking out — “Moulin Rouge!” is perched on Broadway.

That makes it, on paper at least, the “classy” offering in the bunch. The cast and creative team are stuffed with Tony winners. The sets are jaw-droppingly outlandish; the striking costumes are richly evocative for the men, evocative for the women. The budget for Brazilian waxing alone must be staggering.

Yet to me “Moulin Rouge!” is all wrapper, no candy.

Like the film, the musical adopts a chop-shop approach to its set list. But at least Luhrmann managed to convey a blend of irreverence and affection for his material — a telltale sign was his casting of the pop star Kylie Minogue, known for her own flamboyant spectacles, as the Green Fairy.

There is no such love in the Broadway show. The book writer John Logan and the director Alex Timbers treat the songs as interchangeable parts whose sums don’t matter. A telling detail in The New York Times story about clearing the rights was the production’s attitude expressed in this quote: “We’re willing to walk away. Not one song has to make the show.”

That’s because too often the show doesn’t take the songs seriously. It even works against the performers who, with a few exceptions like Karen Olivo’s belting of “Firework,” never maintain the momentum to make the most of their material.

“Moulin Rouge!” is the first Broadway blockbuster made for the age of Shazam and TikTok, a giant live quiz where audience members gasp in self-congratulatory appreciation each time they identify a snippet. It’s a cruel irony since in the last decade streaming has rejuvenated the art of the pop song, freeing it from the need to fit on an album.

To stage excess well, you have to love it unconditionally. “Moulin Rouge!” is too ambivalent for that, perhaps reflecting Broadway’s ingrained diffidence toward pop music.

“Bat Out of Hell” and “We Will Rock You,” on the other hand, don’t have any qualms. (It’s worth noting that both productions originated in Britain, where the relationship between musical theater and popular music is less fraught — that is the country that also gave us “Mamma Mia!” after all.)

Queen and Steinman always sound big. Then again, these are two acts who bloomed in the 1970s — a fertile decade for the outlandish rock operas that were pop’s answer to two fading (at the time) genres: classical music and musical theater.

Steinman, in particular, has the ability to combine melodic accessibility and saga-like length in his songs — he is the Wagner of the teenage wasteland, his songs bloated and addictive. Whereas “Moulin Rouge!” mines extreme fragmentation, “Bat Out of Hell” bets on extended numbers that constantly blur the line between earnest and tongue-in-cheek.

Steinman and the director Jay Scheib understood that holding back was not an option. (Full disclosure: I have written for Arts at MIT, where Scheib teaches.)

Set in the futuristic city of Obsidian, “Bat Out of Hell” matched the handsome, frequently shirtless Strat with the goth babe Raven. He was the leader of a group of mutants stuck in perpetual adolescence while her father, Falco, ruled Obsidian.

Or maybe he was just some sort of omnipotent business tycoon? It wasn’t all that important. What mattered was that this breathlessly crazy show featured desperate love and doomed motorcycle runs, wall-to-wall arias of lust and despair. It had little regard for the rules of the Broadway musical.

So what if the show was, to quote one of its songs, “all revved up with no place to go”? It’s not where the ride took you, it’s how — and how loudly.

A similar anything-goes philosophy drove “We Will Rock You.” The show took place in a future where Earth, now called iPlanet, is run by an evil conglomerate and its C.E.O., Killer Queen. She’s named Killer Queen because she sings “Killer Queen.” That’s it.

Here, as in “Bat,” a revolution was brewing. The resisters included Galileo Figaro and Scaramouche; other outcasts, called the Bohemians, worshiped the hazy memory of something called rock music via salvaged totemic artifacts like a “vy-day-oh tappee” — they didn’t know how to pronounce it and, dear reader, that made me laugh.

The show moved from song to song with a dreamlike quality, which is a polite way to say it didn’t make much sense. And like all roads lead to Rome, here all plot strands led to a grand finale of “We Will Rock You,” “We Are the Champions” and “Bohemian Rhapsody” — the latter so hard to integrate into a story even this far-fetched that Elton didn’t even try and just tacked it on as an encore.

Tellingly, reviews from the theater press for the Steinman and Queen shows have not been kind — although Alexis Soloski captured the wonderfully loony appeal of “Bat” in the Times.

But these productions are valiant, often valid attempts to reconcile musical theater and the pop format. At their best, they leave room for giddy star turns: In “Bat,” Andrew Polec and Lena Hall blasted their way through the songs’ peaks and valleys like hammy rock gods, while as Killer Queen, Krystle Chance propelled “Another One Bites the Dust” into orbit.

And each show — yes, even “Moulin Rouge!” for a few blessed minutes — reminds us how a singularly crafted pop song can make you feel as if it had been written especially for you, while creating an outsize sense of shared universality. That is no small feat.

Despite my preferences, “Moulin Rouge!” of all three shows is the Broadway smash. But I hold out hope for the next musical that really gets the balance right.

Perhaps it will be “KPOP,” which is holding casting calls for a potential Broadway move, after a successful if brief Off Broadway run in 2017.

The show has an original score (by Helen Park and Max Vernon) and story (by Jason Kim), about the inner workings of a K-pop factory. But what made it stand out was a sophisticated understanding of how pop music functions as sensory overload and emotional release, culminating in a finale that was a gratuitous, indulgent, loud explosion of pure joy.

That’s as good as musical theater can be.

She’s the Queen of Tap. Is Her Moment Now?

Scooter Braun breaks silence on public battle with Taylor Swift: 'There have been numerous death threats directed at my family' - CNBC

The Pain of the Holocaust Echoes Through Three Israeli Novels

Scooter Braun breaks silence on public battle with Taylor Swift: 'There have been numerous death threats directed at my family' - CNBC