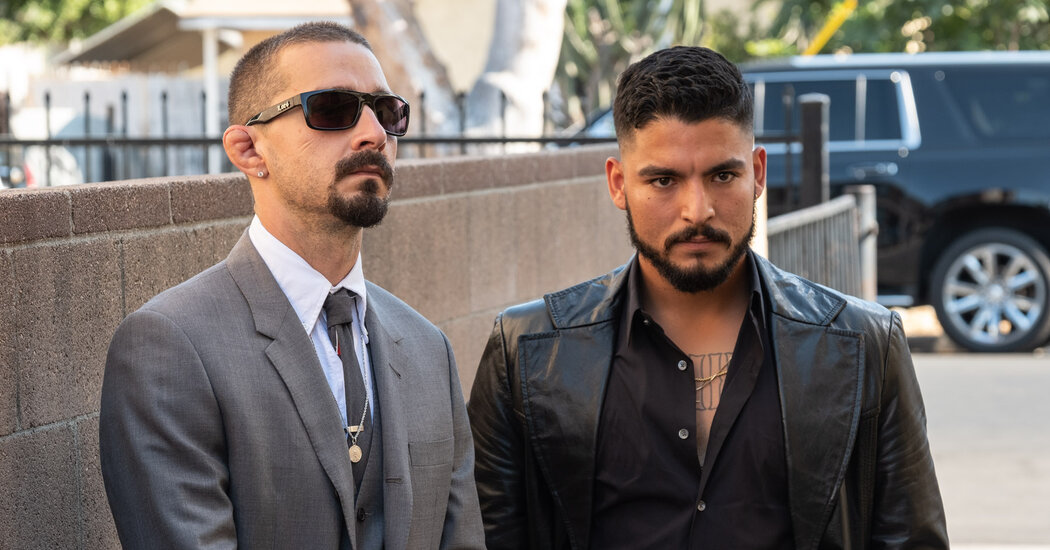 Love. Honor. Loyalty. Family. “The Tax Collector” would have you believe it’s about all these things, as if slapping nouns on the screen (partly in cursive, no less) will convince us there’s a higher purpose to the bloodletting and viciousness that follow. But we’ve all seen “The Sopranos,” and we won’t get fooled again.

Not that this generic gangland banger, written and directed by David Ayer, remotely deserves the comparison. Set in South Los Angeles, the madly illogical plot follows David (Bobby Soto) and his aptly named sidekick, Creeper (Shia LaBeouf). Their job is to collect payments from dozens of street gangs for a protection racket run by the mysterious Wizard, who is currently incarcerated. (Filmed only from behind, or in teasing sideways peeks, the actor playing him is clearly meant to be a secret until the finale, so I’m saying nothing.)

Trouble kicks off when Conejo (Jose Conejo Martin) returns from a sojourn in Mexico and demands that David switch loyalties and work for him. A muscled monster who spends his time day-trading and being doused in the blood of luckless young women, Conejo is a villain so cartoonish we expect a white cat to leap into his lap at any second. Instead, he has a feline female lieutenant (Cheyenne Rae Hernandez), who somehow succeeds in pulverizing foes while sporting an outfit that would seem to preclude the simple act of breathing.

Characters like these, primally motivated and hilariously hackneyed, are emblematic of a movie that underlines every point then repeats it, just to be safe. We know that David is a hood with a heart, because he halts the torture of a thief when he learns the man’s daughter has leukemia. He has an adoring wife (Cinthya Carmona) and cute kiddies; blessings and the Lord’s Prayer feature prominently at his large family dinners. Even the leader of a rival gang (Cle Sloan) is a fan. The only wonder is that Ayer didn’t paint an actual nimbus around his head.

As Creeper, the only non-Hispanic white man among a largely Latino cast, LaBeouf does what he can to convey an outsider who’s desperate to prove his loyalty. (Those accusing Ayer of “brownfacing” by casting a white actor in the role, are mistaken: Creeper is clearly written and performed as white.) But LaBeouf, like his castmates — in particular, the talented Chelsea Rendon from the STARZ drama, “Vida” — is constrained throughout by the weight of the stereotyping and dialogue that doesn’t stand a chance against the violence. Though even I will admit that the scene where a villain gets flattened by a bathroom fixture was pretty cool.

What Happens When Your Baby Isn’t Who You Expected?

Megan Thee Stallion Thanks Her Fans For Their Support