These Radical Black Thrillers Fantasized About Dismantling the Police 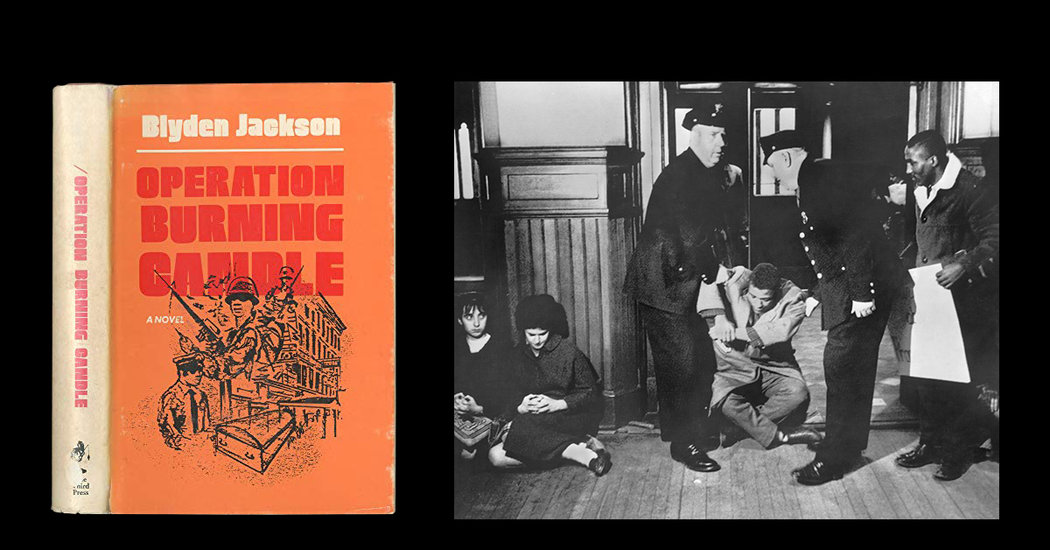 You could almost say these novels predicted their own fates. A telling bit of dialogue appears midway through “Operation Burning Candle,” Blyden Jackson’s 1973 thriller about a Black disciple of Jungian psychoanalysis who fakes his death in Vietnam and returns to America with a group of other veterans to take down the white establishment.

“You may get to write one book, maybe two,” a student activist warns the Jungian revolutionary, Aaron Rogers. “But they’ll get you because they have to. Your ideas are just too damn dangerous for them.”

In this exchange, Jackson foretold not only his character’s future but his own as an author, as well as that of the literary subgenre to which he belonged: the revolutionary Black thriller of the civil rights era. Composed of equal parts pulp fiction and radical politics, a series of novels by Black writers in the late 1960s and early 1970s fantasized about dismantling American police departments, the media and even the government itself — a marriage of form and content that landed them in the small oval of the Venn diagram where Fred Hampton and Frederick Forsyth overlap.

Some of the novels found popular and critical acclaim; one author was hailed in The New York Times as “among the best of contemporary novelists.” But their books soon vanished. Either the audience dried up or publishers got skittish about the radical content and moved on. The authors moved on too — to new topics or, more often, new careers.

These days, the books are tough to find. They’re available as mildewed paperbacks on Bookfinder.com, in small-run reprints from university presses or as hard-to-read bootleg PDFs. Yet their themes and plotlines — featuring corrupt police officers who take their cut from drug dealers’ profits, and institutionalized racism that pays only lip service to equal opportunity — remain distressingly relevant. Together, the trajectories of the books, their heroes and their authors offer a cautionary tale about the struggle to achieve lasting progress on civil rights in America, as well as about the danger of creating speculative fiction that’s a little too truthful for comfort.

Blyden Jackson was a Marine drill instructor who worked in the ’60s as an organizer for a New York branch of the Congress of Racial Equality, where he embraced the tactics of civil disobedience to draw attention to inequities in education. In 1964, he helped stage a sit-down protest, tying up traffic on the Triborough Bridge. For a time, he was romantically involved with Eleanor Holmes Norton, who would become a nonvoting delegate to Congress, representing Washington, D.C. One wonders if she inspired “Elaine,” the young activist in “Operation Burning Candle” who tells Aaron his ideas are too dangerous to get away with more than a book or two.

Elaine’s prophecy proved accurate. Notwithstanding a rave review from Mel Watkins — the first Black editor on the staff of The New York Times Book Review — Jackson published only one more novel: “Totem” (1975), an African quest story that’s even harder to find than his debut. Jackson went on to a comparatively anonymous existence as a husband, father, emergency medical technician and president of an ambulance squad in Middlebury, Vt. When he died in 2012, he left behind an unpublished novel: “For One Day of Freedom.”

Uncanny parallels exist between his first book, “Operation Burning Candle,” and the Black radical thriller “The Spook Who Sat by the Door” (1969), by Sam Greenlee. I was reading Greenlee’s book on a bench in the 103rd Street subway station when I noticed a stocky man looming over me. He had a big beard, long dreads and a United States Army jacket buttoned up all the way. “That’s a good book, man,” he said, then made a solemn Black Power fist and strode off.

This is the sort of book you want to discuss with strangers. In it, Dan Freeman, a seemingly mild-mannered, jazz-loving Chicago intellectual, becomes the C.I.A.’s first Black employee and uses the techniques he learns at the agency to train gang members in his hometown to start a revolution he won’t survive to witness. Greenlee based the novel partly on his experiences as an information officer working overseas for the United States Foreign Service. Even more than 50 years after it was published, the book feels thrillingly incendiary, as if it, like its hero, were only pretending to play by the rules while actually providing a blueprint for revolution. “No one could imagine that Freeman, tame, smug and self-satisfied, would ever rock the boat; much less suspect that he planned to sink it,” Greenlee writes.

Though “The Spook Who Sat by the Door” was adapted into a film in 1973, Greenlee, like Jackson, published only one other novel: “Baghdad Blues,” in 1976. It follows a disillusioned Black Foreign Service worker during a coup in Iraq, where Greenlee was posted in the 1950s. With its suspicion of Western imperialism and its skeptical hero, who finds more in common with the Iraqis than with his fellow Americans, the novel is a spiritual cousin to Graham Greene’s “The Quiet American.” Its attitude is neatly summed up in an observation that appears while the coup is taking place outside the United States Embassy: “I walked through the gloomy halls, watched the frightened white faces and inside I laughed like hell.”

By contrast, Barry Beckham’s 1972 novel “Runner Mack” is much more phantasmagorical and impressionistic. There are echoes of Malamud and portents of “Da Five Bloods” as it tracks the misfortunes of a baseball phenom drafted into the Army. There he meets the charismatic Runnington (Runner) Mack, who hatches a quixotic plan to bomb the White House. But Mack’s fate — dead by suicide — and that of Beckham’s career as a literary writer fit the pattern of the genre’s other radical Black authors and novels. Feted with raves for “Runner Mack,” Beckham had a varied career, editing college guides for Black students, writing nonfiction, teaching creative writing at Brown and Hampton universities and starting his own publishing company. But his next novel, “Will You Be Mine?,” didn’t appear until 2006, and then via his own Beckham Publications Group.

Julian Moreau’s 1967 “The Black Commandos,” in which a group of highly skilled fighters battle bigots, fly a saucer to Washington, D.C., and take over America, is a utopian revenge fantasy that can be seen as a precursor to modern novels, graphic and otherwise, featuring Black superheroes. John Edgar Wideman’s 1973 “The Lynchers,” about a group of Black men who plan to lynch a white police officer, is doleful and ambitiously literary, anticipating Wideman’s distinguished writing career. Both novels share with the others an intensity, an immediacy and a timeliness, despite being consigned to obscurity decades ago.

Near the end of “Operation Burning Candle,” Aaron Rogers flags down a cab. He’s been shot in the gut by a cop after having launched an attack on the Democratic National Convention at Madison Square Garden. The driver wants to take him to the hospital.

“Can’t go to the damn hospital,” Aaron says. “Take me to Harlem!”

The driver drops him off at 116th and Lenox, and he staggers into a playground. Racked with pain, he deliriously imagines that he is being dragged onto a slave ship. But in his dying moments, he looks up: Lights flicker in apartments across the way. People have lit candles, expressing solidarity with the revolution he has started.

“Everywhere there were burning candles!” Jackson writes. “Aaron lay back down. He was glad.”

Today, if you walk to the intersection where Aaron exited his cab, it’s hard to say which playground Jackson had in mind. Two are equidistant from the corner of 116th and Lenox Avenue. One is named for Sojourner Truth, the other for Martin Luther King Jr. On a recent Saturday morning, you couldn’t see any candles in the windows, but on three of the four street corners, vendors sold Black Lives Matter T-shirts and face masks; some had “I CAN’T BREATHE” printed on them. Juneteenth parade marchers chanted slogans and carried black, red and green American flags and pictures of Harriet Tubman and Frederick Douglass. And, if you looked up, you could see signs in some windows. One said “BLM.” Another was a sheet of paper cut into a heart.