This Millennial ‘Emma’ Respects Its Elders 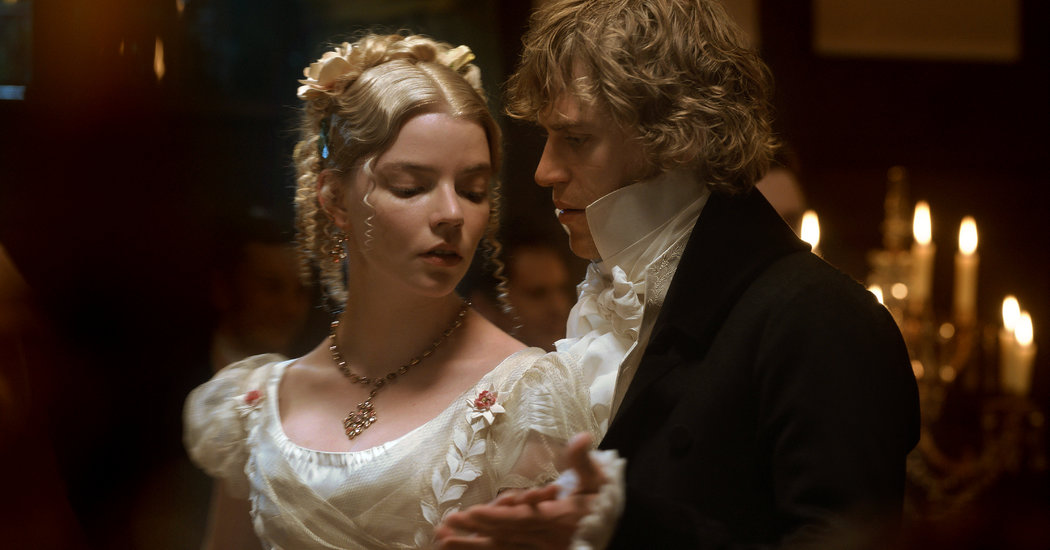 LONDON — When we first see him, Mr. Knightley is completely naked. Later, Emma Woodhouse warms her exposed backside by a roaring fire. In the couple’s climactic romantic scene, blood gushes from Emma’s nose.

In moments like these, the new film adaptation of Jane Austen’s “Emma,” which opens in British theaters on Friday, seems like a bold departure from its restrained source.

The list of names involved in the film is a directory of buzzy millennial talent, suggesting a 21st-century take on the 1815 novel. And the trailer echoes recent spiky, comic period dramas like “The Favourite.” But this new version of Austen’s frequently adapted work is, in fact, a rather faithful and straightforward adaptation.

With a screenplay by the novelist Eleanor Catton, the youngest winner of the Booker Prize, this is the feature film debut for Autumn de Wilde, who’s previously shot an album cover for The White Stripes and a music video for Florence and the Machine. The soundtrack is by Isobel Waller-Bridge, who also wrote the ecclesiastical choral score for the second season of her sister Phoebe’s show “Fleabag.”

Recent period literary adaptations like Greta Gerwig’s “Little Women” and Armando Iannucci’s “The Personal History of David Copperfield” have refreshed their source material by playing with structure and casting a knowing, modern eye over the social constraints of their settings. The characters in them move and speak in ways that seem natural today.

In contrast, this “Emma” unfolds chronologically, with familiar emotional beats and a neat, happy ending. Much of the dialogue is lifted straight from the book, and the period manners remain.

Injecting a modern spirit into this adaptation “wasn’t the first consideration, actually,” Catton said in a telephone interview from her native New Zealand.

“When I read ‘Emma’, I find it endlessly relatable,” she said. It was “so lively and so intimate, and it feels so fresh,” she added, that reappraising it through a contemporary lens felt unnecessary: “It doesn’t at all feel like a book that’s 200 years old.”

In a recent interview in London, de Wilde, the director, agreed: “A great story’s a great story,” she said. “My goal was never to modernize, but only to humanize.”

Adapting a work as well-known as “Emma,” however, has its own challenges. During the wave of Austen adaptations in the mid-90s, dubbed “Austenmania,” there were no fewer than three feature-length takes on the novel: a cinematic release starring Gwyneth Paltrow, a TV film starring Kate Beckinsale, and Amy Heckerling’s high school movie “Clueless.” When a television version aired in Britain in 2009, a critic in The Guardian wondered whether “we need another ‘Emma’ at all.” How do you make a 2020 iteration stand out?

Catton insisted that there has so far been no “iconic period adaptation” of the novel. “We hope that this will be a contender,” she added. (She disliked the Paltrow version, she said, “for a number of reasons,” including the “misogynistic” treatment of Toni Collette’s character.) The new movie’s sense of humor and de Wilde’s “heightened style and absurdist aesthetic” set this “Emma” apart from the rest, she added.

Emma wears a number of modern-looking accessories, from dangly red earrings to a chunky green necklace. Her home is piled high with fabrics, flowers, china and cakes.

“There’s a misconception that everything from that period already looked antique,” de Wilde said. “But color was actually how you showed your wealth. It was very important to me to establish Emma’s place in society by the use of color.”

The actress Anya Taylor-Joy, who brought a dark streak to the doe-eyed innocents she played in “The Witch” and “Thoroughbreds,” foregrounds Emma’s objectionable qualities — after all, this is the heroine Austen said “no one but myself will much like.”

Taylor-Joy’s Emma is poised and quietly scheming: Eyebrows arched, her glassy eyes swivel around the room, scrutinizing her company. She is a vain, manipulative snob. When it suits her, she can be charming, but, to the poor spinster, Mrs. Bates, she is coldly polite at best, and, at worst, openly derisive.

It seems fitting that this Emma is allowed to be a little nastier, at a time when unlikable, self-absorbed, privileged women are being celebrated onscreen.

“There would be no ‘Fleabag’ without ‘Emma’!” Catton said. “It’s a story about someone realizing how self-centered they are,” which felt as urgent in 2020 “as it was in any age of history,” she added.

Then there’s the nudity, and the nosebleed. “I’ve thought a lot about how much the body interfered with some of the most romantic moments of my life,” de Wilde said. “I love the comedy of fighting your body. And a nosebleed is so exposing.”

“It was important to me that Emma seems almost inhuman at the beginning, and then becomes human,” de Wilde said. “We were also human in 1814.”

Jenelle Evans and David Eason Back Living Together, Get New Pet - TMZ

Miley Cyrus Freed the Nipple on Instagram, and Her Fans Are Living for It – Cosmopolitan