This Traffic Jam Is Meant for Rubbernecking 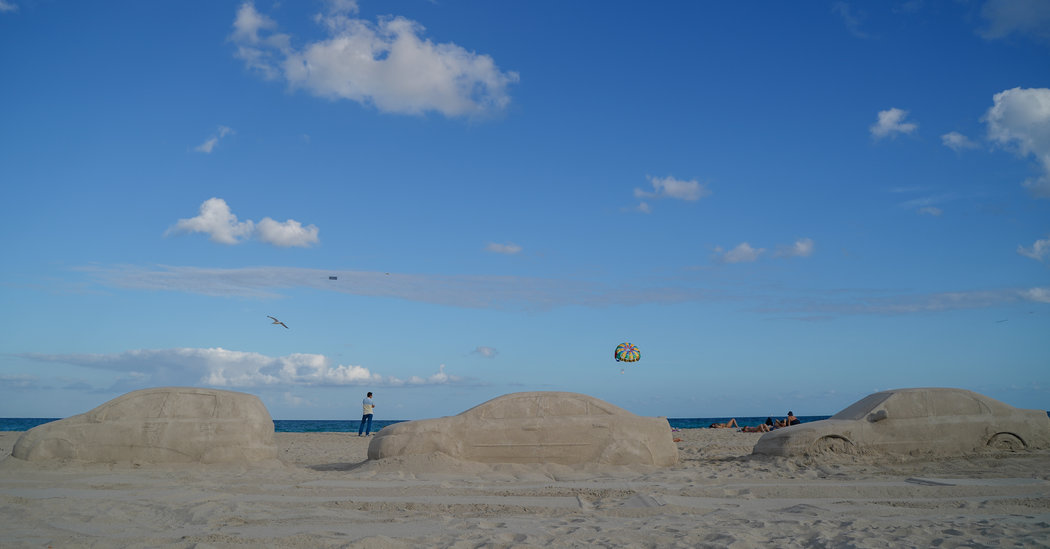 MIAMI BEACH — It is a jarring image: an enormous sprawl of a traffic jam on an idyllic stretch of champagne-colored beach.

It is “Order of Importance,” the latest work of Leandro Erlich, an Argentine artist with a global following, and it will be unveiled shortly before Thursday’s opening of Art Basel Miami Beach.

Mr. Erlich worries about the slow, steady heating of the planet. And his over-the-top traffic jam of life-size cars sculpted in sand is his way of trying to force people to really face the danger.

“We have to do something,” he said. “Miami Beach is on the front line. Sea-level rise is a reality. Here we can see that climate change may affect the order of everything we have built.”

Mr. Erlich, 46, is creating a scene that is somewhat familiar, yet vague. He is modeling his cars and trucks after those made by Mercedes-Benz, BMW, Toyota and others. But making them out of sand — the same color and texture as the beach site just beyond Lincoln Road and Collins Avenue — blurs their features and gives them a ghostly quality.

They are designed to disrupt the landscape and blend with it. Some of the cars will seem to be emerging from the sand, others dissolving into it.

“We make concrete from sand,” he said. “But it also expresses a sense of the ephemeral. Climate change is real. But it can also be difficult to grasp.”

Mr. Erlich is putting more than five dozen cars in his traffic jam, and it will extend over roughly two-thirds the length of a football field. It will be on display to the public through Dec. 15, and be dismantled after that.

The City of Miami Beach commissioned the installation with an allocation of $300,000, as the first of its public art projects with an intentionally short life.

“It feels extra special when you know something is only going to be there for a moment,” said Dan Gelber, the mayor of Miami Beach. “People will remember the moment in our city when they saw this exciting piece of art.”

Mr. Erlich worked closely with Ximena Caminos, an Argentine curator and designer in Miami, on the project’s presentation. They met in Argentina when they were in their 20s.

“I curated an exhibition that showed one of his first pieces,” Ms. Caminos said.

For the traffic jam project, she collaborated with Brandi Reddick, the manager of cultural affairs and public art for Miami Beach.

About a year ago, Ms. Caminos showed Ms. Reddick color renderings of project. “It was amazing,” Ms. Reddick said. “I said, ‘We have to do this.’ ”

But she knew it was going to be an expensive project, costing maybe as much as $1 million. “We went through three or four iterations before we landed on something that was the right price,” Ms. Reddick said.

There were lots of tricky elements. The team could not do anything that would contaminate the beach. And they worried about rain. They had to come up with a special coating to keep the cars from turning to mud. “You don’t want to commission an art work, and the day before it opens, it washes away,” Ms. Reddick said.

Mr. Erlich began painting in his teens. But he shifted to installations and found he especially liked creating illusions and disrupting perceptions. He had grown up walking around construction sites with his father, an architect. In college he studied philosophy.

He got a big break in 2001 when Ms. Caminos, who had become a deputy in Argentina’s department of cultural affairs, recommended him as the country’s representative at the 2001 Venice Biennale, one of the most prestigious global art fairs.

He had been working on a playful illusion, and he took it to Venice. It was a rectangular, above ground swimming pool. It looked full. But it had only a few inches of shimmering water at the top. People walked inside the pool through a side door. From above, they seemed to be in the water. Sometimes they pretended to be swimming.

A Japanese museum bought the installation.

Mr. Ehrlich has since shown his work at biennales around the world and has had solo shows in New York, London, Paris, Beijing, Tokyo, Madrid and other cities.

Mr. Erlich has become fascinated by climate change and the forces of nature. A few years after Hurricane Katrina, he went to a devastated neighborhood in New Orleans and built a framed, second-story window that seemed to be suspended in the air, a tall steel ladder resting on a sill.

“The idea was a rescue,” he said. “But it was too late. The house was already gone.”

Outside the Gare du Nord rail station in Paris, as the 2015 climate change conference was approaching, Mr. Erlich built a stone house with wrought-iron trimmed windows that seemed to be melting in the heat of global warming.

Jorge Pérez, a billionaire developer who has helped shape Miami’s skyline and is the Pérez in the Pérez Art Museum of Miami, owns two of Mr. Erlich’s works.

“The strength of his art is his thought process,” Mr. Pérez said in November at the opening of his own museum in Miami, El Espacio 23. “He creates images that are so realistic and, at the same time, so insanely unrealistic.”

Ms. Caminos said she and Mr. Erlich particularly wanted to create the traffic jam on Miami Beach. “We could have done it in the desert or on a beach in California,” she said. “But we picked Miami Beach because it’s a city facing some of the biggest climate challenges of any American city. And Art Basel brings an amazing international spotlight.”

Why Do Trump Supporters Support Trump?