To Buy This Basquiat, Swipe Right 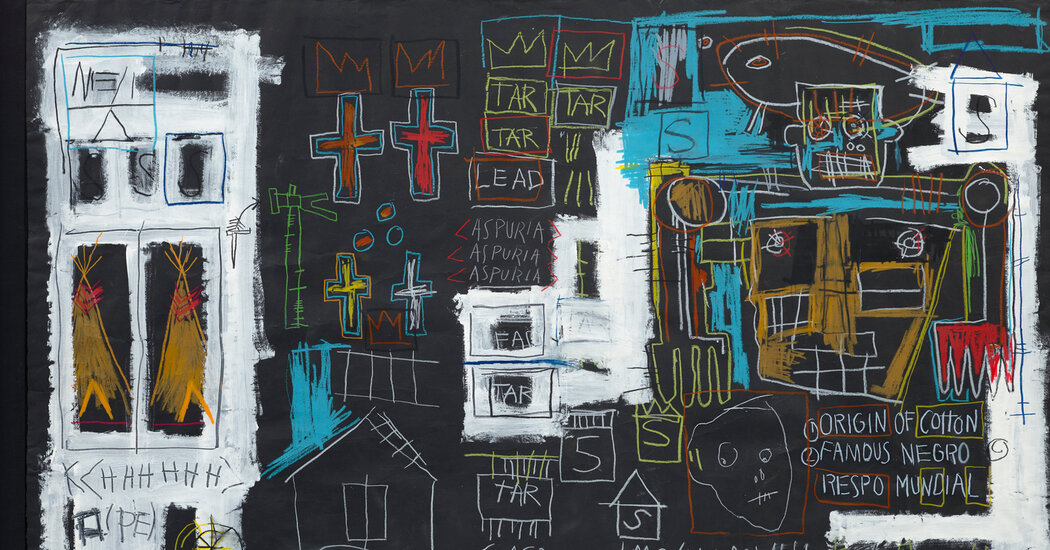 Testing the notion that blue-chip art can be sold with a swipe, the former Christie’s executive Loic Gouzer on Monday will use his new app as the auction block for a large drawing by Jean-Michel Basquiat that is estimated to sell for $8 million to $9 million.

The app, called Fair Warning, started as a lark, Mr. Gouzer said, a way to keep busy under lockdown and to see whether the art world could pivot to online sales in a meaningful way. (Auction houses have since held their first — successful — completely online sales).

“It’s really an experiment,” said Mr. Gouzer, who while at Christie’s built a reputation as a bad-boy rainmaker for coming up with unorthodox sale ideas as well as procuring and positioning big-ticket artworks, most famously Leonardo da Vinci’s “Salvator Mundi” for $450.3 million in 2017.

“The idea was to create a guerrilla type of auction system,” he said, “where you could start moving paintings by using the cloud rather than physical locations.”

So far, the large auction houses seem unconcerned about Mr. Gouzer taking a significant piece of their business. “The availability of only a single lot is a construct easily replicated,” said Marc Porter, the chairman of Christie’s Americas, who called the app “clever and inventive.”

“The key factor will be the breadth of audience,” Mr. Porter added. “In that, he must contend with the worldwide data that the large auction houses, art fairs and mega-dealers have been investing in for years.”

Buyers must apply for admission to the app, where they are evaluated for the seriousness of their collecting. Mr. Gouzer is trying to keep out speculators who would flip the works for higher prices to make a quick profit.

He had hoped to avoid guarantees — lining up a minimum bid in advance — which have become routine among auction houses. But he said sellers demand them these days. (The Basquiat is guaranteed for an undisclosed amount around the low estimate, Mr. Gouzer said.)

The untitled Basquiat — an acrylic and oil stick on black paper that measures about 4 feet by 6 feet — features many of the qualities for which the artist was best known, such as “all the obsessive scribbling and those words that come all the time like ‘tar’ and ‘asbestos,’” Mr. Gouzer said.

He transformed his garage in Montauk into a climate-controlled viewing room where interested buyers can view the Basquiat starting Thursday (he hired security to guard it). The piece will sell on July 30.

At this point, Mr. Gouzer is planning to sell one piece a week — assuming inventory cooperates — with auctions taking place on the app at 5 p.m. sharp on Sundays. The sales are conducted live with the app registering bids. Mr. Gouzer takes a 15 percent flat commission.

While Mr. Gouzer has already been deluged with prospective future lots, he said he is picking and choosing carefully; should he fail to find pieces that satisfy his standards, he will simply wait until he does.

“I only put works that I would buy for my invisible collection — my taste is eclectic but very selective,” he said. “I don’t have pressure, because I don’t have investors. It’s an extension of the curation I did when I was at Christie’s, but with complete freedom.”

What Exactly Is Going On With The Affair‘s Dominic West, Lily James & That Handwritten Note?