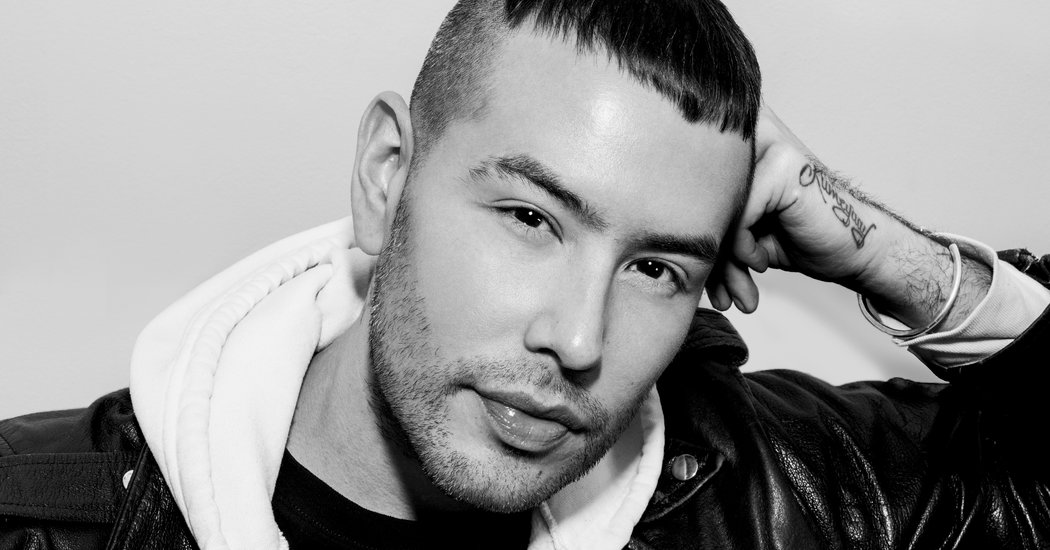 When Tommy Pico published “IRL,” the first of his four smart, chaotic, book-length poems about modern life, the universe and everything, he was an unheralded 20-something gay Kumeyaay Indian (or, as he prefers, NDN) man living uneasily, reflectively, in Brooklyn. Three years and three books later, with “Feed,” he’s still most of those things, but he’s very much heralded in with-it poetry quarters. His mix of verse and prose, diary, comedy and accusation, grimy detail and prophetic announcement, seems to many young and not-so-young writers just what he, and we, need.

All four books chronicle the restless life of a persona, nicknamed Teebs, whose life resembles the poet’s own (@heyteebs is also his Twitter handle). Pico has suggested that they constitute one project, “the Teebs tetralogy.” Yet each has taken on subjects all its own. “IRL” — composed wholly in short, irregular lines — looked at life online: the private, the public and the blurred lines our apps and devices draw between them. “Nature Poem” (2017) addressed ecology and heritage, “a sticky kind of ancestral sadness, bein a NDN person in occupied America,” “when you feel the Earth rotting away on so many home pages.”

Pico’s new one-word title covers varieties of appetite: for sex, for nutrition, for fame, for attention, for news, for gossip, for simple companionship. It also connotes the messiness that Pico lets into his work, and the contemporary information glut (as in social media; as in a Twitter feed) that his style reflects. Pico (or Teebs) turns up the dial on wordplay, introducing hip-hop-inflected syncopations among quick prose blocks. He reflects on his recent success as a touring poet, a writer for our moment, or (as he fears) a writer du jour: “This is a polysaccharide Effective deflection / Rejection heavy, / that he’d forgotten what the feeling / of a good / idea is … Dear reader, / I am a hoar on a book tour.”

“Hoar” can mean old or white (Pico is neither) as well as misspelling more common meanings. Has Pico sold out? Or can he, will he, stay hungry? “Well I’m all appetite,” Pico muses, “siren speeding to another needy feeling … No territory will ever satisfy me.” His comic journeys from place to place (“Portland Oregon is a bunch of white ppl in a brew pub”) frame his search for acceptance, for the right place, the Kumeyaay need for a stable home, and Pico’s own sexual wants and needs: “Lonely / is a desire”; “everything is always hungry / for something.” Sentences, scenes, visions fall apart in shreds, and readers follow, immersing ourselves in the maelstrom of Pico’s mind, almost as we might immerse ourselves in earlier book-length masterpieces of broad-gauge anti-narrative poetry by Walt Whitman, or Allen Ginsberg, or Bernadette Mayer.

If the poem is a book-length meditation, it also presents itself as the notes to a mix tape, beginning with Beyoncé and ending with ‘“Crazy,” by Seal: “Now this song is bombast. But it’s true.” The music accompanies Pico’s sexual yearning and ecological near-despair: “I guess this is a dirge / to the future I thought we could have.” That metaphorical dirge may sound familiar: Pico feels like many of us, privileged and powerless, “listening to a podcast on malnutrition / at the Whole Foods.” What sets him apart? For one thing — as with all genuine poets — his style: Pico is always breaking off, beginning again, weaving rhymes into prose with few other patterns. This agitated irregularity lets Pico portray hungers both spiritual and physical, along with his attempts to remedy them by cruising, by writing, by cooking, “decisive and precise. In what other context do you get to grip a knife like you do when preparing ceviche. Prep is so violent, right?” (Hear those long I’s.)

William Wordsworth, over 200 years ago, sought memories that would give him “life and food” for future years, bulwarks against his own belated angst. Pico’s poems of memory and dailiness, as much as they bring him and his readers up to the minute, take part in that familiar Romantic project, but they find in memory no solutions — not for his sexual craving, not for climate change, not for other newsworthy problems. “Murdered and missing indigenous women / never / ever / ever … get an article a shout out or a headline.” Sex and food — no matter how much we crave them — will not address structural injustice. They may not even transport us, or prevent us from feeling alone. Nor will the sublimity of science, seeking “Earth-like exoplanets” where life could also arise (a repeated Pico theme), assist our lives on earth. It’s as if there were nothing Pico (or Teebs) could do.

Those friends, by the end, feel like a key to the project: both the IRL friends who might read (or kiss) Pico, and the imaginary future friends and soulmates whom Pico, like Whitman, like Beyoncé, finds through words and song. “Dear readers, / Yr easy to love but hard to get close to …. It’s like this whole /thing about being / ‘with’ / somebody is a game of whack-a-mole.” Breaking off, then bringing his terms back together, Pico has found new ways to treat his readers almost (but not quite) as lovers or ex-lovers, close to his skin and close to his fears. “When everything else goes dark,” Pico writes of Beyoncé, “she looks into the faces of the crowd — it’s all she can see … The dark is, in fact teeming with life. The reciprocity.” We are, at least, together for a moment with this poet in his eclectic and restless confidence, and maybe that togetherness will feed our hearts, though it will not heal our earth: “Imagine that you are a circuit,” the volume concludes. “Imagine whirring electricity. / Imagine being fed, and feeding. / Imagine getting what you need.”

‘A Quiet Place Part II’ First Trailer: Why Is It So Noisy?