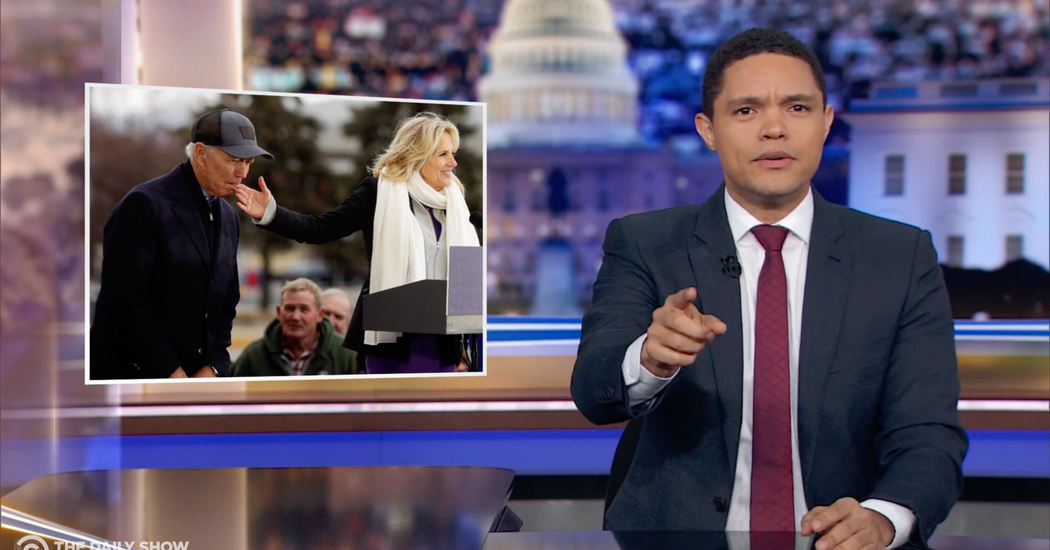 Welcome to Best of Late Night, a rundown of the previous night’s highlights that lets you sleep — and lets us get paid to watch comedy. If you’re interested in hearing from The Times regularly about great TV, sign up for our Watching newsletter and get recommendations straight to your inbox.

Trevor Noah and other late-night hosts made fun of former Vice President Joseph R. Biden Jr.’s new presidential campaign slogan, “No Malarkey,” which Biden unveiled during a tour of Iowa.

It didn’t strike Noah as much of a rallying cry, and besides, he’s not sure what it means.

“Is Joe Biden’s slogan really going to be ‘No Malarkey’? That’s your slogan? ‘Yes we can!’ ‘Make America great again!’ ‘No malarkey’? What does that word even mean? It sounds like the dish your vegan cousin serves at Thanksgiving: ‘It’s not turkey, it’s malarkey! The main ingredient is mold! Namaste.’” — TREVOR NOAH

Noah also took Biden to task for a public display of affection with his wife, Jill, during an Iowa campaign stop. As she addressed a crowd onstage, Biden nibbled at her finger.

“Look, I actually think this was a cute moment between a couple. But it would be cuter if it was at home, instead of in the middle of a rally. That makes it a little bit weird. Nibbling your wife’s fingers, it’s all about context.” — TREVOR NOAH

“Today is Cyber Monday, which is followed tomorrow by Someone-Stole-the-Blender-From-My-Porch Tuesday.” — JIMMY KIMMEL

“Well, you guys, today is Cyber Monday. All across the country, people spent the day ordering a bunch of crap online in their underwear — then remembered it was Cyber Monday.” — JIMMY FALLON

“Amazon had all kinds of great deals on speakers, cameras, smart TVs, voice assistants and a bunch of other stuff that secretly records people having sex.” — JIMMY FALLON

In a poll conducted by The Economist and YouGov, a majority of Republicans said they considered President Trump a better leader than Abraham Lincoln. A number of late-night hosts were appalled, but Kimmel’s response might have taken the cake.

“Trump isn’t even a better president than Daniel Day-Lewis pretending to be Abraham Lincoln.” — JIMMY KIMMEL

“This is a crazy story: In New Jersey, someone found a message in a bottle from 1907. Yeah, the note said: ‘The Jets suck.’” — CONAN O’BRIEN

The Bits Worth Watching

Did you know that the “dark web” has its own version of Cyber Monday? Conan O’Brien and his team are here to educate you about it.

John Mulaney spun the “Tonight Show’s” Wheel of Opinions and offered impromptu takes on random topics. (On mistletoe: It’s a “perverted garnish over the door. I don’t want to see it, I don’t want to hear about it.”)

What We’re Excited About on Tuesday Night

The writer Ta-Nehisi Coates, known for his writings on race and inequality, recently released his first novel, “The Water Dancer.” He will speak to Noah on Tuesday.

Also, Check This Out

Why Do We Keep Matching Rihanna With Random Suitors?