Trump Impeachment: A Dramatic Day, Everywhere but at the Podium 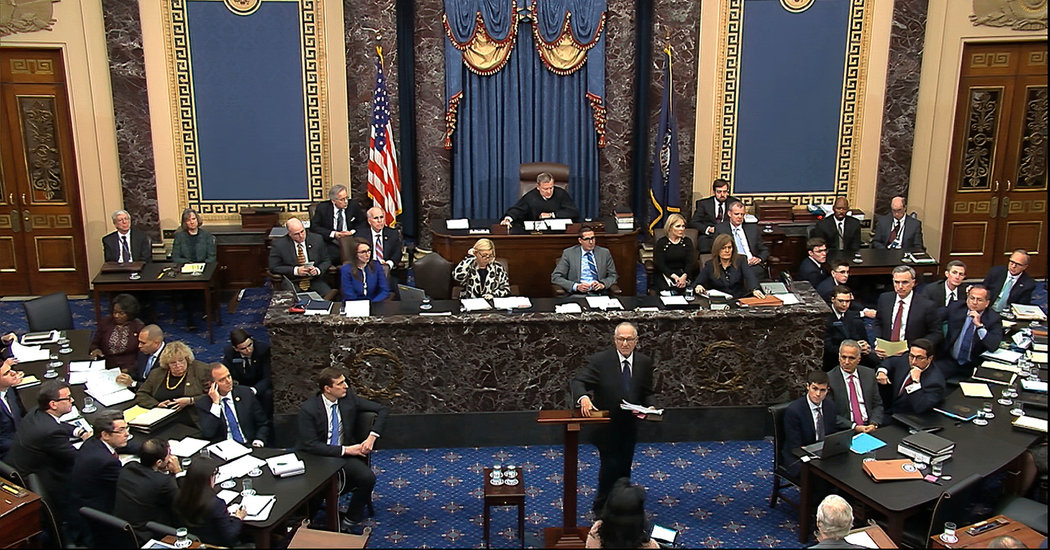 President Trump, reportedly, wanted a telegenic team to make the case for him at his impeachment trial. But the biggest star in the Senate chamber on the first full day of his defense on Monday was The Man Who Wasn’t There.

On Sunday, a report in The New York Times about a book manuscript from the former national security adviser John Bolton upended the trial. As Mr. Bolton tells it, Mr. Trump said directly that he wanted to freeze aid to Ukraine until the country helped with investigations into the Bidens — a central charge in the trial.

But though the news hooked jumper cables to the day’s TV coverage — raising the possibility of an extended trial with witnesses — you wouldn’t have known it from the speakers at the podium. As Jake Tapper put it on CNN, the president’s defense seemed determined to ignore “the giant white mustache in the room.”

There has been a tension, from the beginning, between the telephile president’s desire for a showy, made-for-broadcast defense and his defenders’ wish to get the trial over as quickly and quietly as possible.

The president chose his defense team, in part, from people who impressed him on his favorite shows. He named a congressional spokes-squad of his most vocal defenders during the House hearings. And he hired the likes of Alan Dershowitz, who was not only on the defense in the O.J. Simpson murder trial — that smash daytime drama of the ’90s — but has become a Fox News regular advocating for Mr. Trump.

The Trump team even curtailed its weekend opening session, after the ratings-minded president tweeted that Saturday is “Death Valley in T.V.” So his team made only a short expository opening on that day, skirting the weekend ratings desert.

Then on Sunday, they got hit by a Bolton from the blue.

Suddenly, the story had, for better or worse, a dramatic twist, one that the legal team seemed to have little interest in acknowledging.

Instead, the case on Monday began with one of the president’s celebrity defenders, Ken Starr, arguing that America had fallen into a dangerous “age of impeachment” in which charges against the president were brought too hastily.

Yes, that Ken Starr. You may remember him from such TV hits as the impeachment of Bill Clinton, in which he served as independent counsel — the dawning of the age of impeachment.

It was, at minimum, an eyebrow-raising match of lawyer and argument. You might have thought that Mr. Starr would at least acknowledge the irony. ([Record scratch]: “Yep, that’s me. You’re probably wondering how I got here.”) But if there was a joke, he wasn’t in on it.

“Like war,” he said in all seriousness, “impeachment is hell.”

If the Trump defense was not eager to mention the Bolton news, the network graphics stepped in. While Mr. Starr spoke, an ABC inset summarized the charges in Mr. Bolton’s manuscript and quoted senator Mitt Romney of Utah saying, “It’s pretty fair to say that John Bolton has relevant testimony to provide.”

For its part, the Trump defense team was constrained by the same visual limitations as the House managers: two static camera angles provided by Senate-run cameras. Like the House team, they used video to illustrate their arguments and break up the visual monotony.

But they presented a markedly different picture. Their clips focused on questions from Republican representatives in the House impeachment hearings and red-meat imagery for their party’s base, such as Nancy Pelosi handing out souvenir pens at the signing of impeachment articles. (“A celebratory moment!” exclaimed Mr. Trump’s personal lawyer Jay Sekulow. “Think about that!”)

They made particular use of news clips late in the afternoon, in what amounted to an extended campaign attack ad making Mr. Trump’s case that Hunter Biden, the son of the former vice president, was a legitimate target of investigation. Viewers could be forgiven for thinking they had slipped into a coma and awakened in the middle of the impeachment of President Joe Biden.

At the end of the day, the defense closed with Mr. Trump’s handpicked TV lawyer, Mr. Dershowitz, though Mr. Sekulow introduced him with his academic and Supreme Court–clerk credentials, not his Simpson-trial or cable-news résumé.

And it was the lecture-hall Dershowitz more than the greenroom version who showed up, making a classroom-style argument for a position — that abuse of power is not an impeachable offense — that he conceded went against the academic consensus.

His most striking statement, though, was finally mentioning He Who Must Not Be Named. “If a president, any president, were to have done what The Times reported about the content of the Bolton manuscript, that would not constitute an impeachable offense,” Mr. Dershowitz said.

Even at that, Mr. Trump’s home-team network, Fox News, which bowed out of showing much of the House managers’ arguments last week, left Mr. Dershowitz on mute for most of his presentation. “We’ll duck in live if anything newsworthy happens,” Tucker Carlson said.

As the off-camera developments suggested, there may be more time for that yet.

Oscars: Inside The Academy Award Nominees Luncheon Where Everyone Is A Winner - Deadline

Lil Baby Might Be Rap’s Most Reluctant New Star