‘We Have to Hear Each Other Out’: Two TV Stars on Friendship and Race 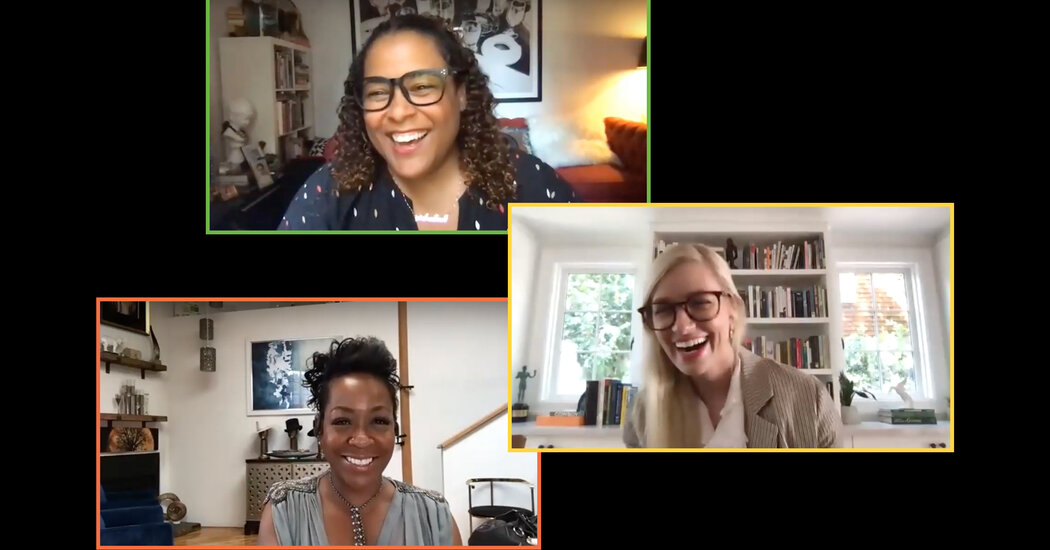 Because of the social and racial divisions across the country, it’s easy to wonder sometimes: Can people who are even the slightest bit different ever understand one another? Tichina Arnold and Beth Behrs do. The actresses, co-stars of “The Neighborhood” on CBS (currently on pause because of the pandemic), spoke with Dodai Stewart, deputy Metro editor, about their friendship in a recent Times Live at Home conversation. Here are excerpts that have been edited for clarity.

It’s been months. What has your quarantining been like? Have you been baking? Do you have new skills? I heard something about a banjo, I’m not saying who.

BETH BEHRS I have been playing the banjo. I have always wanted to and never had the time to pick it up. I was, like, “I am going to garden and learn the banjo.” Because I felt stuck. And fun fact, Tichina, I’m reading a book right now called “The Banjo: America’s African Instrument,” and I’m learning about the roots and how it was the way to communicate, and its history is both heart wrenching and fascinating.

ARNOLD And these are the makings of a really good interracial girlfriend relationship. Honestly. I told Beth, “As your Black friend, I will be doing you a disservice if I do not tell you the truth and if we don’t communicate with each other.” She was, like, “Well, I just need to do this.” I said, “Well, by golly, do it.” That’s what it takes.

We have to communicate with each other. And that’s why I love Beth Behrs so much, because we are able to sit down, look each other in the eye and talk about the most intimate things and the things that irk us. So Beth, thank you, for being such a good friend. It means a lot.

BEHRS I paid her a lot of money before this interview to say that. No, Tichina is a once-in-a-lifetime friend. She’s also like an older sister who has been through everything, sometimes worse than what a woman can go through in this business. But I just look to her as always telling the truth, but also always coming from a really grounded, spiritual place from the heart. We joke about it and we laugh about it, but there’s really truly something special between us.

On the show you are neighbors who become friends, and it’s mostly a Black neighborhood, and here is this white family. Your husbands have their issues, but you as friends get over things very quickly. Did you find that came to you naturally in real life as you started working together?

ARNOLD Yes. We operate on the same frequency. And Beth and I since the inception of the show, when we were together on the set from the time we met, it wasn’t about our color. It wasn’t about us even being women. It was about: “We’re about to bring this damn comedy. We are about to tear these walls up.”

So we met on common ground. And when you meet on common ground, it creates the basis for a wonderful relationship, no matter what color it is. When you start on the same level and you are looking eye to eye with somebody and you are jumping off the cliff with your work, that is the basis of a wonderful relationship. So that’s where Beth and I started out. Out the gate, we were ready to rock.

When you were first starting out, and saying, “I just want to perform, I just want to share this gift,” I’m sure there were so many obstacles. What are some of the ways that you overcame those obstacles?

ARNOLD Beth is afforded certain things that I am still afforded, but how it’s looked upon and how it’s treated and how it’s cultivated, it’s completely different. So our roads are different. And it has not been easy. And there have been a lot of changes made, but we’ve got a long way to go. We are not done.

But I believe that Beth and I on “The Neighborhood,” we represent change. We represent something that’s not even new. It’s always been here. Our relationship, there are a lot of Black women and white women out there that have the same relationship that Beth and I have. But guess what? It gets drowned out by the bull. Sorry to bring it down.

I think it’s interesting that you are on a sitcom about racial issues, and we are having a kind of reckoning going on in all kinds of forms, in entertainment, in academia, a racial reckoning around the police, and it’s pervasive. And you have a show that discusses these issues. Have there been moments while you were filming that you felt really spoke to the atmosphere around you?

BEHRS Yeah. I used to shy away from being uncomfortable. Like, “I don’t want to ruffle feathers.” Now, we have tackled some things on the show that Tichina and I talked about. Tichina and I had an episode where, the moral of the story was a police officer followed her through the store even though I was the one who was doing the stealing. I’m trying to educate myself and also learn how to be an ally and be uncomfortable and step the [expletive] up, because it’s something that I know has been my privilege to shy away from.

As a country, I feel like we have to do better. We have to come together. We cannot be separate anymore. And I’m so grateful for my relationship with Tichina Arnold for helping me grow. And I think it’s our responsibility now to help others. And I don’t know what I just said. I feel like I went on an emotional tangent and Tichina, please help.

But Beth is not going to walk in my shoes. I’m never going to walk in her shoes. So how can we understand each other? We have to hear each other out. Because even as Beth is learning a lot of stuff about Black culture and Black women, I do the same. I have to learn about how she feels and how she processes things.

I’m loving this conversation. We have some questions from the audience. Chelsea asks, “Do you have any advice for how to ask privileged female co-workers to step up and advocate for others in professional spaces?”

ARNOLD When they state “privilege,” what do they mean? Privilege all around or are they using the word privilege for white? I need to differentiate the two, because I will give you two separate answers.

Let’s say that it is white.

Denise asks, “What’s the best advice you have ever received?”

BEHRS Something that I have read in “Untamed,” the book, multiple times. Glennon Doyle says in her book: We can do hard things. And I think about that especially during this time in our country and with the pandemic and everything, and also as women — we can do hard things, and it’s OK to feel your feelings. You have to feel it to heal it. Her book would be the best advice for women and men that I have ever read.

ARNOLD “It’s nice to be important, but it’s more important to be nice.” It’s my motto. Me being nice and me being cordial and me being able to understand and have dialogue with other people have gotten me jobs where somebody else was better than me because of how I handled myself and how I talked to the producers, how I talked to the director, how I engaged. That lives far longer than you just focusing on the job. The job is more than the job. The job is everything that surrounds the job.

Go here to see the full interview, and find out here about upcoming Times Events.

Here’s Everything Coming To UK Netflix In September

Best gifts for under $50: Gift ideas for absolutely everyone

I’m A Celebrity: Behind the scenes at Gwrych Castle