What Happens When Your Baby Isn’t Who You Expected? 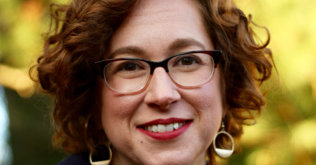 RAISING A RARE GIRL
A Memoir
By Heather Lanier

Heavily pregnant with a second child, Heather Lanier deliberately read a book by a mother whose infant son was dying. She’s not a masochist, only a realist.

“I needed this story,” Lanier writes. “I needed to get as close as possible to the absolute worst that I feared.”

Lanier’s memoir is now on the short list of books I’ll give, when the time comes, to my own pregnant daughters. It’s not just because a wise woman ought, in this as in all else, to be prepared for disaster even as she hopes for delight. It’s not even because Lanier’s writing is clean and beautiful.

In this story of her rare girl, Lanier shines a clear light on what we sign up for when we allow a human soul to come through us and into the world, in whatever “interesting and beautiful package” that soul might find.

“I tried to make a superbaby,” Lanier confesses. Within 20 pages we’ve witnessed the birth of a too-tiny girl and eavesdropped on the first of a series of grim conversations with doctors, some of them astonishingly insensitive: “Your child will be significantly disabled. If she lives at all.”

One doctor notes Fiona’s diminutive size, her wide-set eyes and Y-shaped butt crease, and concludes that something is wrong. “It’s either bad seed,” he says, “or bad soil.”

Wolf-Hirschhorn syndrome, the genetic disorder that afflicts Lanier’s daughter, is characterized by the deletion of genetic material, leading to a constellation of severe physical and mental disabilities.

So sure are we that the sine qua non of a life worthy of love lies in meeting certain standards of “normality” that the prenatal detection of much milder disabilities or reparable defects will prompt a conversation. About choices.

“Abort it and try again,” the evolutionary biologist Richard Dawkins wrote to a mother pregnant with a Down syndrome child.

“Among my fellow Wolf-Hirschhorn syndrome parents, I’ve heard horror stories,” Lanier writes. “One woman received her daughter’s diagnosis in utero and was told by her OB that she ‘should’ terminate. At 26 weeks pregnant, she was given three out-of-state locations to call immediately. (She never did.) Another mother, also pregnant, met with a geneticist who repeatedly used the word ‘burden,’ explaining that her daughter would not only be a burden to the family but to society.”

“I didn’t sign up for this,” Lanier cries to her sister, and then corrects herself: Of course she did. The parent signs up for whatever the child brings.

Fiona was born before her disability could be discovered. Her parents received hints from presumably well-meaning physicians that there remained options by which they might liberate themselves from the burden of their daughter. “Here’s something a parent of a typical child probably never has to suffer through,” Lanier writes crisply. “A conversation with a doctor in which the doctor wonders aloud whether a child like theirs can be ethically killed.”

It is love that makes such choices unthinkable. Fiona is not a diagnosis but a person, and a beguiling one. OK, so she doesn’t hit the developmental milestones that other babies do — those enormous babies, freakish in their roly-poly athleticism, that Lanier observes with wonder and envy at church or the pediatrician’s office. Her girl lies there, tiny and still, gazing about with onyx eyes. She doesn’t roll over or sit up, babble or crawl. But she does grow. She giggles. (“They were faint, like bubbles from the tiniest fish.”) A speech therapist observes that she can combine two elements — grunt plus gesture — to convey meaning. This means Fiona has language.

Lanier teases out the glory, charm and humor of these moments, letting us adore her child with her. And then she delivers a hard jab to the sternum: “I was learning: The simple act of loving her was countercultural.”

Refreshingly, Lanier’s husband, Justin, an Episcopal priest, is given room to demonstrate the ways in which practicing a religion prepares one usefully for a crisis. His training in Christian contemplative prayer and Zen meditation gives him strength that Lanier both leans on and is grateful for. As mother and writer, she draws on a liberal, questioning but questing faith, and brings to both vocations the humane message of Christ on his cross and Siddhartha’s 49 days beneath the Bodhi tree: You, my beloved child, are worth this much … and more.

Who Saves an Emergency Room Doctor? Her Patients

Everything coming to Disney+ in December 2020

A Wordless Way to Write a Novel