What’s on TV Monday: ‘Making It’ and ‘Diamantino’ 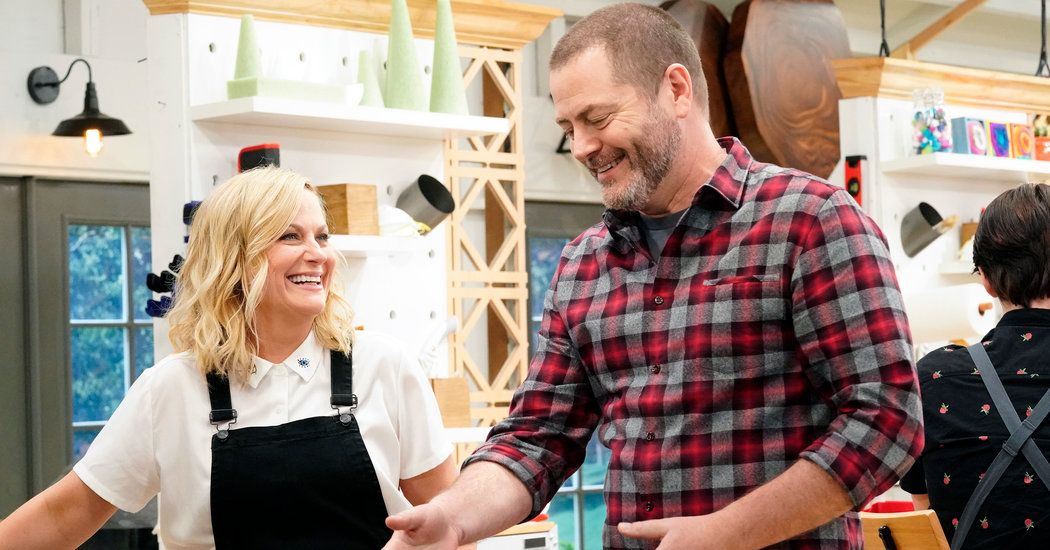 MAKING IT 10 p.m. on NBC. If you haven’t completed your holiday shopping yet, this craft competition show may inspire you to make your own gifts. The hosts Amy Poehler and Nick Offerman (“Parks and Recreation”) return for a second delightful season of creative exploration and craft puns. In this premiere, 10 contestants show off their making prowess by creating models of themselves as food items and reimagining their favorite inventions from their childhood. The judges Simon Doonan of Barneys and Dayna Isom Johnson of Etsy offer their expertise while Poehler and Offerman lighten the mood when the stress kicks in.

THE GREAT CHRISTMAS LIGHT FIGHT 8 p.m. on ABC. For a more extravagant competition, tune into this short-run, holiday-themed series. Families across the country flaunt their over-the-top Christmas decorations for a chance to win a cash prize. Carter Oosterhouse (“Rachael Ray”) and Taniya Nayak (“Restaurant: Impossible) return to host.

DIAMANTINO (2019) Stream on Criterion. This comedy just might top this year’s list of most peculiar movies. Diamantino Matamouros (Carloto Cotta), a Portuguese soccer star, is inches away from a World Cup victory, his mind consumed with giant puppies frolicking in cotton candy pink clouds. Then he suffers a humiliating loss and his clueless optimism makes way for a sudden realization that the world can be a dark place. The film’s zany, inventive plot draws Diamantino into a right-wing conspiracy involving the European Union. There are also evil twins scheming for his fortune, a mad scientist who wants to replicate his DNA and an undercover agent (Cleo Tavares) posing as an African refugee. Glenn Kenny named the movie a Critic’s Pick in his New York Times review, writing that it occasionally “feels like an early Adam Sandler comedy remixed by Pier Paolo Pasolini.”

TEAM KAYLIE Stream on Netflix. Kaylie Konrad (Bryana Salaz), a teenage celebrity, returns for more court-ordered community service as leader of a middle school wilderness club in Part 2 of this comedy series. She has warmed up to the group, but becomes infuriated when she learns her T.V. show has replaced her with an obnoxious child star.

ALMOST FAMOUS (2000) Stream on Hulu; Rent on Google Play, iTunes, Vudu or YouTube. This coming-of-age classic needs no introduction, but here goes. Set in 1973, Cameron Crowe’s Oscar-winning semi-autobiographical dramedy follows William (Patrick Fugit), a teenage music journalist who pursues the opportunity of a lifetime: Writing a cover story for Rolling Stone. His assignment sends him on tour with the up-and-coming band Stillwater, and though the acclaimed rock critic Lester Bangs (Philip Seymour Hoffman) warns him not to befriend the stars, William can’t help himself. He falls for a self-described “Band-Aid” (Kate Hudson) who, like him, is blinded by the band’s fame. Twenty years later, the film lives on: A musical adaptation opened in San Diego this year to positive reviews.

From Normal People To Succession: How TV Is Tackling Class In 2020