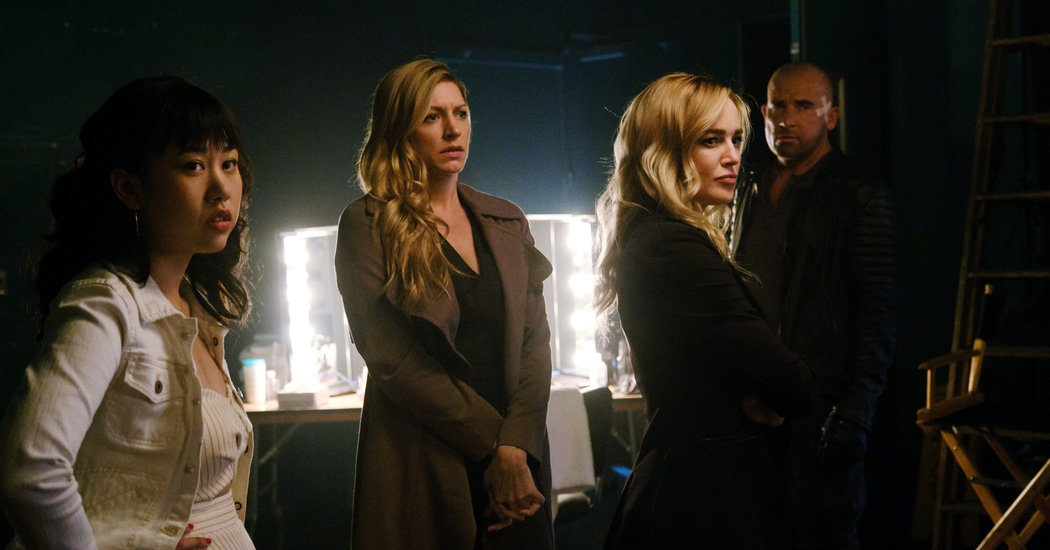 DC’S LEGENDS OF TOMORROW 9 p.m. on the CW. After defeating a group of monsters and magical creatures that had been released from hell last season — using odd methods, like singing James Taylor songs — the Legends have become a worldwide phenomenon. In this Season 5 premiere, they invite a documentary crew to film them as they look into a new blip in the timeline, but Sara (Caity Lotz) is not happy with the attention.

PROJECT BLUE BOOK 10 p.m. on History. Aidan Gillen (“Game of Thrones”) stars in this drama series about an Air Force program set up to debunk cases involving unidentified flying objects in the 1950s and ’60s. Gillen plays Allen Hynek, a professor who can’t simply dismiss inexplicable events, despite pressure from the government to do so. Season 2 opens with Hynek and Capt. Michael Quinn (Michael Malarkey) visiting Roswell, N.M., where someone claims to have evidence of an extraterrestrial crash landing.

FORTUNE FEIMSTER: SWEET & SALTY (2020) Stream on Netflix. The comedian and actress Fortune Feimster (“The Mindy Project,” “The L Word: Generation Q”) takes the stage in Charlotte, N.C., for her first hourlong Netflix special. Feimster riffs on her childhood and draws laughs through plenty of self-deprecating anecdotes: She has been mistaken for the actor Patrick Renna, who starred in “The Sandlot,” and she lived through an excruciating, failed attempt to become a swim champion as a child.

VERA Stream on BritBox. This popular British crime series returns for a 10th season — and it has already been renewed for an 11th. Brenda Blethyn stars as Vera Stanhope, a veteran detective chief inspector who is a little rough around the edges and, like most TV sleuths, obsessed with her work. The series, based on the crime novels by Ann Cleeves, is ripe for binge-watching: The four-part season looks at cases that touch on corporate corruption and organized crime, starting with the mysterious death of an entrepreneur whose body is found by bailiffs trying to repossess his house.

MISS SLOANE (2016) Stream on Amazon; rent on Google Play, iTunes, Vudu or YouTube. Jessica Chastain plays a ruthless Washington lobbyist in this political thriller directed by John Madden. Elizabeth is always one step ahead of her opponents, and she cannot be bothered by ethics. But she does have one principle that comes to light when an organization asks her to make gun ownership more appealing to women. The film’s ending disappointed some critics, yet over all the movie received positive reviews, mainly for Chastain’s performance. Writing in The New York Times, Stephen Holden said she stars “with such steely authority that you are hard pressed to imagine another actress playing the imperious, largely unsympathetic title character.”