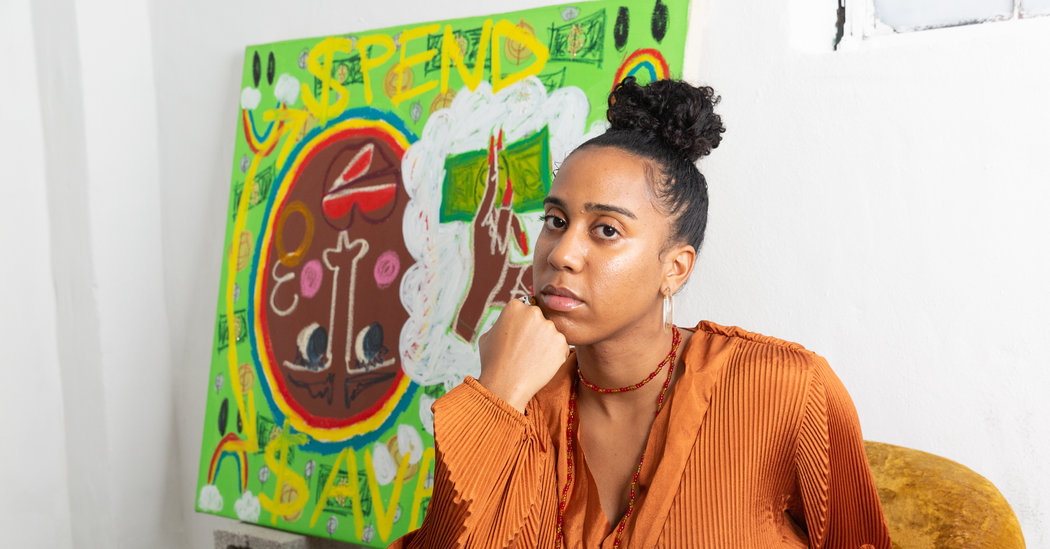 Eilen Itzel Mena’s painting “Aje” pays homage to an ancient Yoruba religious goddess of wealth and prosperity. It features an upside-down face surrounded by money, and the words “spend” and “save” connected with a double-sided arrow.

Achieving prosperity, Ms. Mena believes, requires a balance in spending and saving. If you give, she said, you will receive.

To Ms. Mena, 25, that dynamic also should serve as a metaphor for black artists like herself: By putting work into the world (giving), she said, they can receive abundance for themselves and their communities, not just in the capitalistic sense, but more important, in cultural and spiritual ways.

But she and other black artists fear that things don’t often work out like that for them.

At a time when black creators are being celebrated as much as ever — from Hollywood to the fine arts — some are raising the question of whether black people are truly the main beneficiaries of the culture they produce.

That theme is at the center of an exhibition opening on Wednesday in Miami, outside of the official Art Basel program, bluntly titled “Who Owns Black Art?”

It is spearheaded by Zeal, a studio and creative agency supporting black visual and performance artists that started last year. The exhibition highlights the underrepresentation of black people at various levels of the art world — from the rosters at major fairs to the ownership ranks of galleries to the consumers purchasing work.

“It’s fine for us to be the producers of culture and the generators of culture,” said Tia Oso, Zeal’s West Coast principal manager and an organizer of the show. “But when it’s time for us to reap a value or the reward, or even be recognized for the genius of our creativity, then it seems that there’s a problem.”

The three-day exhibition, featuring work from more than a dozen emerging black artists, including Ms. Mena, who is also curating the show, reflects on the question of black art ownership. Organizers and participating artists say the conversation is broad.

In one sense, it’s calling attention to the need for black people to become more active as art buyers so as not to miss out on potentially lucrative investments. In another sense, it’s about the dearth of black-owned galleries. And it also addresses underrepresentation among the ranks of museum staff, fair directors and other arbiters who have significant influence over which works and artists get elevated.

A survey published this year by the Andrew W. Mellon Foundation found that while diversity in museum leadership grew by five percentage points from 2015 to 2018, people of color account for one in five people in those positions.

Black-owned or operated galleries are virtually absent among the exhibitors at the official Art Basel show. (Fair organizers said they did not know how many such presenting galleries were at the Miami show). But Karla Ferguson, a staple of the local art world as the founder and chief executive of Yeelen, a gallery in Little Haiti, said she did not know of any.

The small number of black gallerists and curators across the industry means that, to some extent, black people do not fully own the stories that black art tells, Ms. Ferguson said. Curators and gallerists can decide, for instance, to stay away from work that tackles tough issues; or they may elevate those pieces that fit their notions of black culture, she said.

“Historically the narrative has been very much through the white male gaze,” Ms. Ferguson said. When that happens, she added, “You’ll never have a completely authentic story.”

The location of “Who Owns Black Art?” in the Miami Urban Contemporary Experience event space in Little Haiti also speaks to the question of ownership. Art Basel has contributed to the gentrification of the Wynwood neighborhood in Miami, and there is great concern that Little Haiti — with its flourishing indie art galleries, and trendy eateries replacing botanicas — is well on its way to a similar fate.

None of this, organizers say, is to suggest that there isn’t plenty of black art out there that gets wide recognition. Art Basel has made strides over the years to diversify its exhibitions in Miami and to bring attention to shows happening outside its official program. (A pamphlet advertising shows centered on artists from the African diaspora will be included as an insert in the official Art Basel guide.)

Still, some black artists said that was not enough.

Rhea Leonard, a 28-year-old Miami artist, likes to build a connection with patrons interested in her work. At the “Who Owns Black Art?” show, she is exhibiting a sculpture of what first appears to be an ordinary silver bracelet. But a closer look reveals it to be teeth sculpted out of pewter and fashioned together to look like a bracelet.

The piece is meant to symbolize the commodification of black bodies, she said, and to make a statement about how people “are so apt to want to take parts of black culture, but don’t want to engage in the trauma of it.”

Ms. Leonard said it’s essential that potential buyers understand her motivation before they purchase her work. Although consumers are welcome to interpret her work as they see it, she said sharing her intent was one way for her to maintain ownership over the narrative behind her work, even long after it is out of her hands.

“Ultimately, you would want your work to have a home with someone who understands where the work came from and what pain and concepts brought it about,” she said.

Ed Maximus, 33, a visual artist based in New Jersey, is showing a photograph of four nude black women weaving their bodies together at “Who Owns Black Art?” The picture represents the women owning their bodies and creating space to support each other, he said. In a way, black artists are doing the same thing, he added.

Ashlee Thomas, the president of the Miami Urban Contemporary Experience, an arts production company, said, “The best thing we can do as black people owning our culture: build the platforms ourselves.”

That has been happening. Sugarcane Magazine, started in 2006, covers art from the African diaspora, and publishes a guide to black art fairs taking place around the same time as Art Basel. Art Africa Miami, a fair showcasing artists of African descent that runs during Art Basel, began in 2011. Prizm Art Fair, which features the works of artists from the African diaspora, is in its seventh year. Some black art enthusiasts view these endeavors as a way to build an ecosystem that is beneficial to black artists and black consumers. They provide an entry point for people to learn about works and building a market for the artists, said Mikhaile Solomon, the founder and director of Prizm.

“You create an experience around them and a narrative around them that creates value,” Ms. Solomon said of black artworks. “And you encourage people to participate in that.”

Storm Ascher, 25, started Superposition Gallery last year after graduating from the School of Visual Arts in New York with a degree in visual critical studies. Her traveling gallery, which has produced seven shows, grew in part out of discussions that she and her friends were having about the challenges of breaking into the industry as people of color. They talked about the difficulty of getting residencies, gallery representation and curating opportunities. And they figured, why wait around for others to bet on them when they could bet on themselves, said Ms. Ascher, who is also exhibiting at “Who Owns Black Art?”

“We’re young, we’re black and we’re starting all these things ourselves,” she said. “We don’t need to ask permission.”

Tons of Star Wars board games are on sale at Amazon

Tons of Star Wars board games are on sale at Amazon

Where to stream 2020 Golden Globe-nominated miniseries