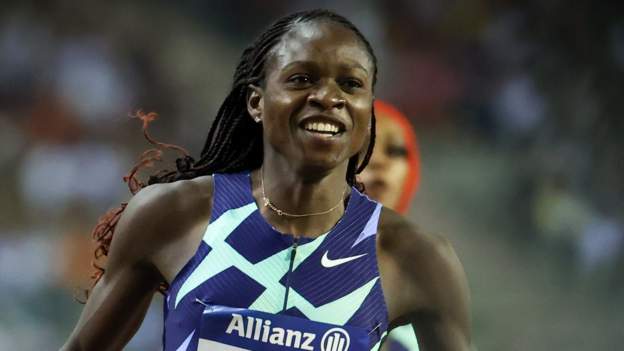 Christine Mboma produced a powerful late surge to edge out Shericka Jackson in a star-studded women’s 200m race at the Brussels Diamond League.

American Sha’Carri Richardson was fourth with a time of 22.45.

Double Olympic champion Elaine Thompson-Herah did not race after dropping out with an Achilles injury.

However, the Olympic champion, 21, failed to break his own world record after three missed attempts at 6.19m.

Eilish McColgan ran the third fastest time by a British female to finish seventh in the women’s 5,000m.

The 30-year-old Scot, competing for the first time since failing to qualify for the Olympic 5,000m final, ran 14 minutes 31.26 seconds, falling short of the British record time she took from Paula Radcliffe at the Diamond League Oslo meet in July.

Fred Kerley became the first man to win 100m, 200m and 400m races in the Diamond League as he claimed a narrow victory in the 100m.

The final Diamond League meet of the season takes place in Zurich on 8 and 9 September.

Afghans With Ties to U.S. Who Could Not Get Out Now Live in Fear

Afghans With Ties to U.S. Who Could Not Get Out Now Live in Fear

Fast fashion in U.S. is fueling environmental disaster in Ghana

Insurers ask the unvaccinated to pick up COVID-19 treatment costs