by VIPortal Team
in UK
0

Rohit Sharma’s imperious century gave India the edge over England after three days of a fascinating fourth Test at The Oval.

Rohit was commanding in making 127 – his first Test hundred outside India – leading the way as the tourists reached 270-3, a lead of 171.

He added 83 for the first wicket with KL Rahul, then 153 for the second with Cheteshwar Pujara, who was impressive for 61.

My dad, held hostage in Iran

Rohit benefitted from being dropped for the second time by Rory Burns, the man who also missed the chance to catch him on the second evening.

England found some inspiration with the second new ball – Ollie Robinson removed both Rohit and Pujara in the same electrifying over.

However, Virat Kohli arrived to calm the situation with Ravindra Jadeja. Kohli had 22 and Jadeja nine when bad light ended play with 13 overs still to bowl.

In a series that has been fascinatingly contested and a Test that had seen the sides arm wrestle for three days, India may have made the decisive move.

Faced with overheads that would have encouraged the bowlers, the tourists collectively stuck to old-fashioned Test values to bat themselves into a position from which they will be considered favourites.

There were times when England were flat, the mood of the home team as dark as the sky overhead.

Some of England’s problems are of their own making. They could have bowled India out more cheaply on day one and been more ruthless with the bat on day two. In total, they have missed six catches.

They are not out of this contest – early wickets on Sunday with a ball that is only 12 overs old may yet mean their fourth-innings target is within reach.

However, England will have to be near-perfect from now on if they are to emerge victorious. 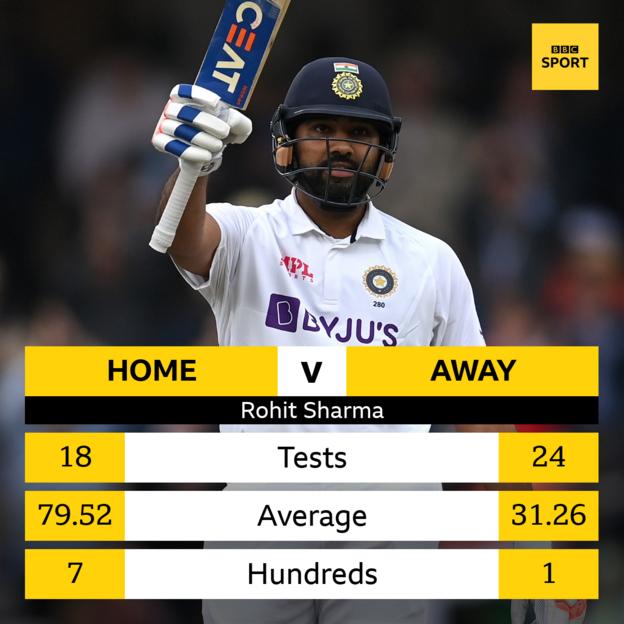 Rohit is one of the finest white-ball openers of all-time, but his growing stature in Test cricket has been built on performances in India.

In this, his 25th away Test, he played with discipline, determination and control to finally reach three figures overseas.

After he was missed by Burns on Friday evening on six, the same man put down a diving one-handed chance at second slip off Robinson when Rohit was on 31.

Reprieved, Rohit moved to his slowest half-century in Test cricket, from 145 balls with only two fours. Though his defence remained solid, he needed just another 59 deliveries to go to 100, bringing up the milestone with a majestic six over long-on off Moeen Ali.

Pujara painfully rolled his ankle early in his innings, yet played with uncharacteristic fluency, especially on the cut.

The drama of the second new ball brought The Oval to life, but Kohli’s continued presence is ominous for England.

This was a back-breaking day for England. Though the clouds were present virtually throughout, the hosts were faced with batting of the highest class on the flattest of pitches.

There were times when England looked weary. There were others when an attack of four fast-medium bowlers lacked variety and the off-spin of Moeen was manipulated.

The dropped catches have proved incredibly costly and Joe Root’s side were strangely reluctant to go short – Rohit barely faced a bouncer until after tea.

Even when the breakthrough came, it was from a Robinson loosener, a long hop that Rohit inexplicably helped to long leg.

Five balls later, Pujara inside-edged on to his thigh and was adjudged to have been caught at third slip on review.

As the light worsened, Root was told he could only employ spin, which he did for two overs before deciding it was too comfortable for the batsmen, and when England tried to go back to pace, the umpires intervened.

Former India wicketkeeper Deep Dasgupta on Test Match Special: “Rohit makes batting look so easy it is just unfair. When he put his bat up after his hundred he was obviously extremely happy but there was some relief as well that the monkey was off his back – it being his first away hundred.”

Former England captain Michael Vaughan: “It has not surprised me that England have struggled because the ball has not been nipping around. This is a little bit of a concern not just for this game but the winter in Australia.”

England assistant coach Paul Collingwood: “We’ve seen in this series momentum can shift very quickly. Hopefully we can get the ball swinging tomorrow and bowl them out cheaply as possibly. Conditions look good for batting, so we shouldn’t be scared of whatever total we have to chase.”

Biden, Still Grieving His Son Beau, Finds That Not Everyone Wants to Hear About It

My dad, held hostage in Iran

How Nazanin Zaghari-Ratcliffe keeps in touch with family

How to Vote in the California Recall