Tens of thousands of members of Italy’s youth-driven “Sardine” movement have rallied in Rome, as part of their campaign to battle xenophobia and shake up the country’s politics.

The “Sardines” have become a symbol of protest against far-right firebrand leader Matteo Salvini, who served as interior minister and deputy prime minister in Italy‘s previous coalition government and cracked down on immigration.

In the Italian capital’s immense San Giovanni Square, retiree Roberto Piperno was among those joining the crowd on Saturday, which sang the anti-fascist anthem Bella Ciao, a staple of the movement’s demonstrations.

He turned out because he did not want to see “hatred propagated” and to do nothing would make him “ashamed to be Italian”, he said.

Taking aim at “populism”, 32-year-old Mattia Santori, a founder of the movement, told the crowd the idea was to “bring out a new energy through a much freer and more spontaneous form” than a traditional political party “that will not be hierarchical” but would instead set “broad directions”.

One demonstrator held up a giant sardine model, while others brandished drawings and posters.

The movement, only a month old, started in Bologna when a rally organised by four unknown activists to denounce Salvini’s discourse of “hatred and division” drew a crowd of 15,000, surprising everybody.

Al Jazeera’s Hoda Abdel-Hamid reporting from Rome told Al Jazeera that the rallies are also perhaps “a message to the leftist parties in government”.

“People here will tell you that there aren’t doing enough to spread the message fo the left, they aren’t representing them anymore,” Abdel-Hamid said, adding that the question is now: “Where does this movement go from here?”

“Does it become a political party? Will it come up with some concrete political demands?

“It has been very successful at mobilising people. The next step is what everybody is wondering about and it’s going to be a strategic move for these four members of the Sardine movement, who just a month ago didn’t know that they will become such high profile people in Italy,” Abdel-Hamid said.

Since then, they have staged a series of rallies drawing tens of thousands in Milan, Florence, Naples and Palermo.

“The first was against Salvini and then it became a reaffirmation of democracy: we are anti-fascist, pro-equality, against intolerance, against homophobia,” Mattia Santori, one of the movement’s founders, told AFP news agency.

Santori, a researcher in economics, and the other co-founders – Andrea Garreffa, a 34-year-old tourist guide and Roberto Morotti, a 31-year-old engineer – say they want to make politics “cool”.

The movement’s representative in Rome is Stephen Ogongo, a 45-year-old journalist of Kenyan origin.

He set up the Facebook page of the local chapter of the Sardines announcing the rally about 15 days ago.

‘We are tired of hatred’

Before Saturday’s rally, Ogongo said the “important thing is to see many people take to the streets to say ‘we are weary of this culture of hatred. We will no longer tolerate language that is racist, fascist, discriminatory or sexist’.”

Ogongo received threats and insults when he got Facebook to erase racist messages from an account bearing Salvini’s name with the title Prime Minister.

Salvini, he said, had “allowed the worst forms of racism” to flourish. 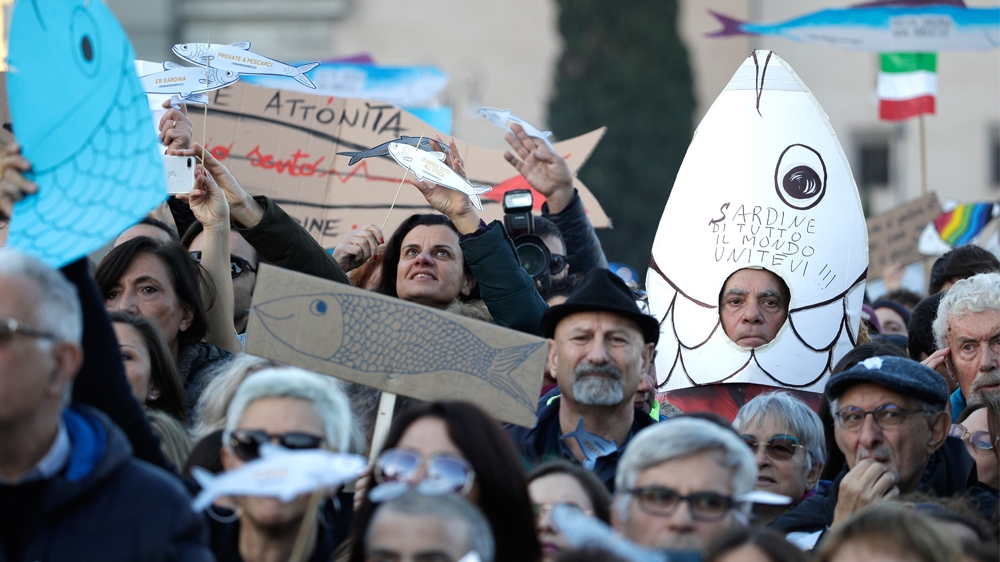 Many Sardines also rally against climate change, the mafia and poverty.

The movement is turning its attention to the small towns they say are “fragile territory”, susceptible to “simplistic ideas and populism”.

The movement was a response to the growing strength in the north of the right-wing coalition led by Salvini’s far-right League party.

In late October, the League won a historic victory in regional polls in central Umbria, which had been led by the left for half a century.

Salvini is now campaigning hard to try to capture another leftwing stronghold, the wealthy northeast region of Emilio Romagna.

Regional elections there are set for January 26 and the polls suggest the League’s candidates are running neck and neck with the current centre-left governor.

Salvini has said he wants to win regional polls to to bring down the current coalition between the Five Star Movement and the centre-left Democratic Party, and thus force early elections.

Elsewhere, small rallies in support of the Sardines were held in Brussels, Madrid and Bordeaux in southwestern France.