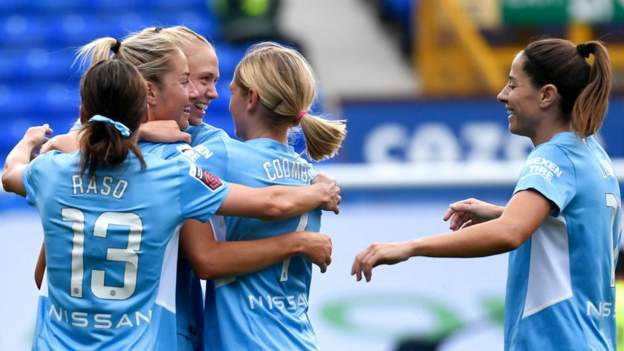 Shaw tapped in a third from close range with Steph Houghton adding the fourth with a superbly-taken free-kick.

The game at Goodison Park was the first in the WSL to be shown free-to-air on UK television.

Last season’s runners-up City put on a show for those tuning in to BBC One with a dominant display to underline their 2021-22 title credentials.

Their front three ran riot against the home side’s back-five defensive setup in the first-half, with Losada’s cool finish off the post, Beckie’s unchallenged driving run into the middle and finish and Shaw’s simple finish ending the game as a contest.

Steph Houghton’s typically ruthless and well-executed free-kick iced the cake as City extended their unbeaten run in WSL to 19 games with an 11th straight win over Everton.

Willie Kirk’s side have big aspirations this season of breaking into the top three of the division after a summer that has seen them bring in nine players.

They were second-best throughout, though, with Danielle Turner’s low free-kick, pushed past the post by Karima Benameur, the closest they came to a goal.

‘We are still dragging our heels on a number of things’

Everton boss Willie Kirk: “The way the game started in the first few minutes, I thought we looked bright enough but we never managed to look after the ball well enough and we weren’t brave enough out of possession. The way we have been playing and training has been based around that bravery and we were nowhere near the level. That caused us a lot of problems. That’s disappointing.

“I thought we opened the second half really well and it was a lot, lot brighter but the damage had already been done. I would have been very worried if we didn’t get a reaction from the players at half-time. We changed the shape and made a couple of substitutes which got a reaction.”

Manchester City manager Gareth Taylor: “We’ve made big steps but we are still dragging our heels on a number of things. It was a really efficient and professional performance. We were put under pressure in different spells. We managed the first part of the game really well and scored some exceptional goals with real quality.

“It’s three points, that’s all it is. With where we’re at, I did think a point here today would be a good result. Everton are a good team with good players and even at 4-0 they were putting us under pressure, they didn’t give up, so it was pleasing to get a clean sheet.”

‘Scarborough’ film to debut at the Toronto International Film Festival

Coronavirus: What’s happening in Canada and around the world on Sunday

‘Scarborough’ film to debut at the Toronto International Film Festival

Covid-19 in the UK: How many coronavirus cases are there in my area?

Dogs of 9/11: The story of Atlas, an NYPD K-9 who searched ground zero and saved his owner’s life